Here's a quick look at local art news, from Meow Wolf changing its Phoenix plans to another mural coming down in the face of sexual misconduct allegations.


Another Fortoul Brothers Mural Is Gone

A mural created by artists Gabriel and Isaac Fortoul, who make collaborative works as the Fortoul Brothers, has been painted over in the aftermath of allegations of sexual misconduct made last year against Isaac Fortoul. The mural was located at Garfield Elementary School, and created with support from the Mollen Foundation. They began painting the mural, which was a 200-foot-long work in progress, in January 2018.

It was removed on July 1, 2020, according to a representative of the Phoenix Elementary School District who provided the following statement to Phoenix New Times on Wednesday:

“The Fortoul Brothers’ artwork was removed from exterior walls at Garfield School after the district learned of allegations of inappropriate misconduct by one of the artists. Our schools are the hubs of our communities, and we have an obligation to our students and our neighbors to ensure that any murals or décor added to the exterior of our facilities represent the core values established by the Governing Board.” 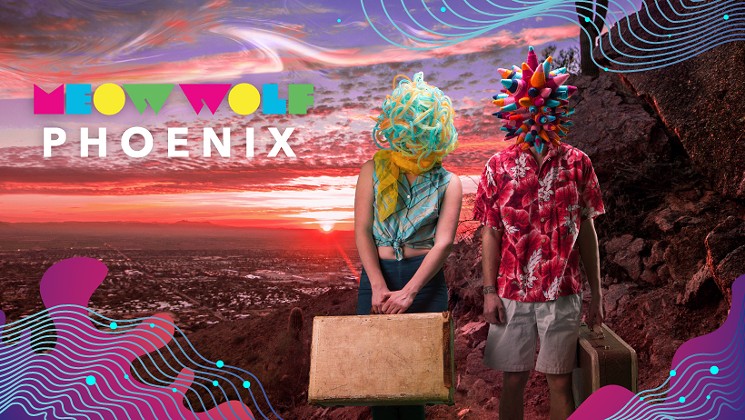 No need to pack your bag for a Phoenix Meow Wolf hotel after all.
Meow Wolf

It’s been two years since Meow Wolf announced plans to create a Phoenix project in partnership with True North Studios, which was set to include a 400-room hotel and a 75,000-square-foot exhibition area with performance venue. Now, co-CEO Jim Ward, who lives in Phoenix, says they’ve nixed the hotel, and no longer have specific plans in place for bringing Meow Wolf to Phoenix. Even so, Ward says he hopes Meow Wolf will have a creative space in Phoenix at some point in the future. 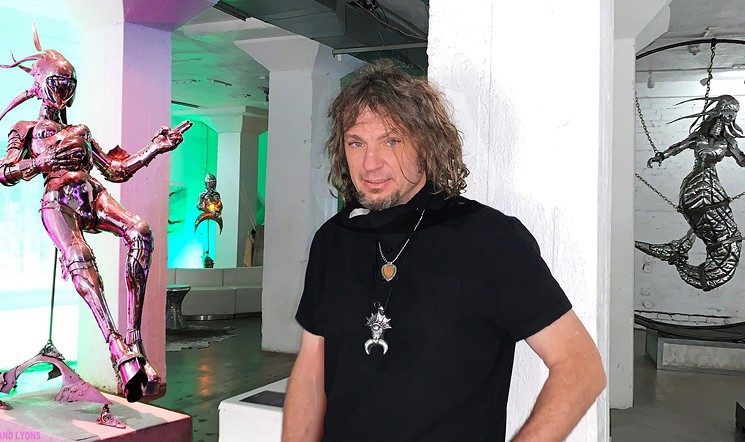 Sean T French, a Phoenix-based sculptor who specializes in metal figurative works that often reference women’s power and medieval armor, won the first challenge in a new TV competition called Assembly Required. French was one of three makers to compete for the $5,000 prize in the first of 10 episodes, which aired on the History Channel on Tuesday, February 23. You can watch the “Bring the Heat” episode, which includes French competing from his home studio in Peoria, online.

Several new exhibitions are opening in coming days. Vision Gallery in Chandler will present works by Ashley Czajkowski, Matthew Garcia, Ann Morton, and Steven Yazzie in its “Sediments: Layers of the Phoenix Valley” exhibit from February 27 to March 27. Art Intersection in Gilbert is showing photographs by John G. Zimmerman, whose work has graced publications from Ebony to Sports Illustrated, in a show called “Americanicity” that opened on February 20 and runs through April 17. Shemer Art Center is featuring works by 30 Arizona-based artists in its “Clay Today” exhibit from February 24 to April 8. Artists in the Shemer exhibit include Nicholas Bernard, Esmeralda DeLaney, and Jon Higuchi. Hours and admission costs vary.

Detail of the new Heather Freitas artwork that will be on view in Roosevelt Row.
Valley Metro

Mural art created by Heather Freitas will be featured at the Valley Metro light rail station at Roosevelt Street and Central Avenue as part of Valley Metro's Artsline initiative that sets artworks in public transportation settings. Freitas' work is currently on view on the exterior of the nearby Cambria Hotel. Valley Metro expects to install her work on March 4 or 5. Previous artists who've had work shown at the Roosevelt/Central station include Tato Caraveo, Bill Dambrova, Kayla Newnam, and others.

The latest children’s novel by author and ASU professor Jewell Parker Rhodes, the founding artistic director for the university's Virginia G. Piper Center for Creative Writing, has been nominated for an NAACP Image Award. Titled Black Brother, Black Brother, the book explores colorism and racism in the educational system through the tale of two brothers. It’s one of five nominees in the Outstanding Literary Work - Youth and Teens category. Winners will be announced during an awards ceremony on March 27.
KEEP PHOENIX NEW TIMES FREE... Since we started Phoenix New Times, it has been defined as the free, independent voice of Phoenix, and we'd like to keep it that way. With local media under siege, it's more important than ever for us to rally support behind funding our local journalism. You can help by participating in our "I Support" program, allowing us to keep offering readers access to our incisive coverage of local news, food and culture with no paywalls.
Make a one-time donation today for as little as $1.