'We Don’t Want Another Mill Avenue': The Latest on Developing Danelle Plaza in Tempe 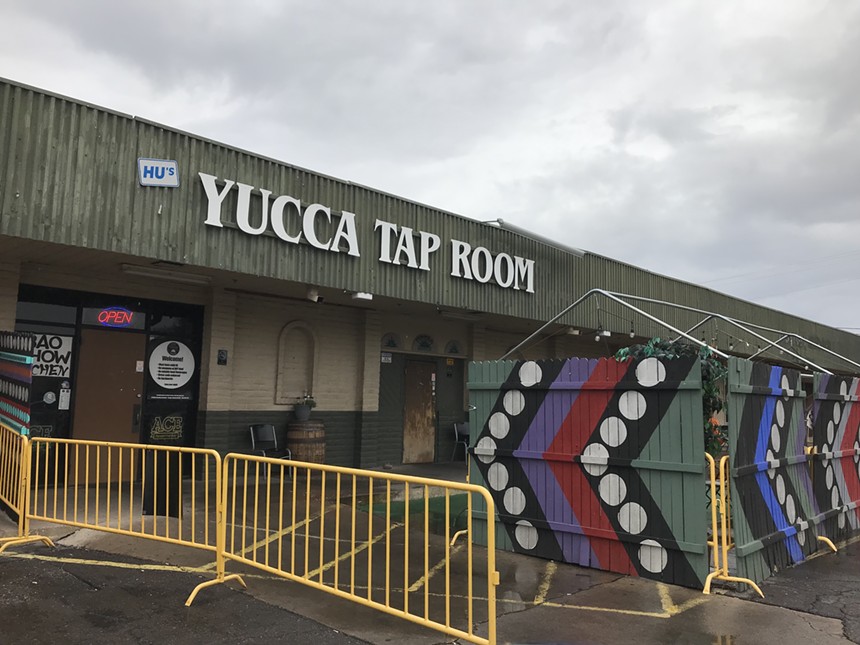 Entrance to Yucca Tap Room, with art by Kyllan Maney, at Danelle Plaza.
Lynn Trimble
Big changes are coming to the southwest corner of Mill and Southern avenues in Tempe. It's just hard to say when.

The strip mall, known as Danelle Plaza, is currently home to several small businesses, including Yucca Tap Room and Double Nickels Record Collective. But it’s also home to a robust alternative arts scene that includes an event called Tempe Art A Gogh-Gogh, plus a shifting landscape of murals and installation art.

"It's kind of like the last mecca or outpost of original thought and creativity," Evan Liggins says of Danelle Plaza. Liggins is a staple of the arts and music scene in Tempe, and Tempe Art A Gogh-Gogh is his brainchild.

Giant (2019) by Melissa Waddell and Abe Zucca for Tempe Art A Gogh-Gogh.
Lynn Trimble
Recently, the area’s Brentwood-Cavalier neighborhood association circulated a summary of two proposals for Danelle Plaza, which is owned by a variety of stakeholders and has long been eyed for some kind of mixed-use development. (There's also a chart floating around that includes a fictional parody-style plan for the plaza, which has people wondering what’s going on with the space.)


The city owns approximately 3.14 acres at the site, including the building with most of the murals. In recent years, Danelle Plaza has been discussed at various meetings of the city’s arts and culture commission, and an ASU design class taught by professor Elena Rocchi has devised a conceptual vision for the plaza that’s focused on art, music, and small business.

On March 19, the city issued a request for qualifications (RFQ) inviting “all qualified and interested parties” to submit proposals for buying its land and creating a mixed-use development at Danelle Plaza.

But Tempe canceled the RFQ on June 23 after reviewing plans submitted by two development teams in April.

“The RFQ was canceled in part because the city believes the process will benefit from a more comprehensive solicitation that will require more detail from responding firms,” a city spokesperson told Phoenix New Times in July.

City officials haven’t publicly released the proposals they reviewed, asserting it’s not required by city code in cases where another RFQ gets issued within six months.

Instead, they plan to make the proposals “available for public inspection” once a contract is awarded under a subsequent solicitation, according to the July 21 email to New Times.

So far, that solicitation hasn’t happened.

Looking north past a Tempe-owned building at Danelle Plaza.
Lynn Trimble
Meanwhile, representatives from the development teams have met with Neil Miller and Paul Hubbell, the chair and vice-chair of the neighborhood association.

After those meetings, Miller went on the neighborhood association's Facebook to share her own synopsis and analysis for each plan. It's a private page limited to area residents, but others picked up the information and started circulating it in other circles.

One team is Miravista Holdings, which is led by Brad Wilde, a developer whose other projects have included Tempe Marketplace. The other team is Guina Affiliated Developers, which is headed by Eric Guina.

Guina owns several parcels at Danelle Plaza. So does Rodney Hu, the owner of Yucca Tap Room, who is part of the Miravista Holdings team.

New Times reached out to both Wilde and Guina, but neither provided us with a copy of their proposal. Wilde cited a confidentiality agreement, and Guina referred us to public relations professional Jason Rose, who declined to comment on the record.

Without those documents, it’s impossible to know whether the plans pitched to the neighborhood association match the plans submitted to the city.

Miller’s summary indicates that there are significant differences in the plans, particularly in the area of housing. Wilde’s group wants just 200 housing units, according to Miller, while Guina’s group wants 1,100.

She’s expressed strong support for Wilde’s plan, citing both his qualifications and her concerns about what over 1,000 units of housing would mean for traffic in the area and the plaza’s homegrown cultural scene.

“We don’t want Danelle Plaza to become another Mill Avenue,” Miller says. “This is not a hard choice, or even a close call.”

Miller says she hopes that community members are paying careful attention to Tempe plans for future development. But that means consistently following city council agendas, and watching to see whether Tempe issues a new RFQ or RFP for its parcels at the plaza.

Like many local creatives, Liggins plans to say on top of it. “There’s really no other place like it in Tempe,” he says. “We really need to try and keep that organic spirit going.”
KEEP PHOENIX NEW TIMES FREE... Since we started Phoenix New Times, it has been defined as the free, independent voice of Phoenix, and we'd like to keep it that way. With local media under siege, it's more important than ever for us to rally support behind funding our local journalism. You can help by participating in our "I Support" program, allowing us to keep offering readers access to our incisive coverage of local news, food and culture with no paywalls.
Make a one-time donation today for as little as $1.