The cover of Maybe a Poem Might Fracture Things by Brandon McGill and Best Tardy. Brandon McGill
Artist and body painter extraordinaire Brandon McGill has had a busy and fulfilling year, both professionally and personally.

On the professional front, McGill published a fantastic collection of his body-painting photographs titled Gods and Monsters at the start of the year. It collects 55 models personifying their favorite mythological deity or creature with the assistance of McGill's talents. On the personal front, he's found true love with his fiance, Best Tardy.

Together, they have collaborated on a book to celebrate their first anniversary. If McGill's art is what he loves to do, the collaboration found in the pages of Maybe a Poem Might Fracture Things is a true labor of love.

McGill has been developing his renowned body-painting art form since 2013, and he has grown to prominence not only in the local art scene but has developed a following throughout the world. He's frequently selling out his books Alive in Wonderland (2015), Zodiac (2016), Neon City (2017), and the aforementioned Gods and Monsters.

He's also created notable calendars for those enthralled with his celebration of painted nudity. He has gained additional recognition through his work on local music videos by Captain Squeegee ("Dually Noted" and "Our Children") and Fairy Bones' "Notes From Wonderland," which won best music video at Phoenix Fan Fusion (back when it was still Phoenix Comicon).


The experience that McGill provides is fulfilling for both the artist and the model.

"Body-painting, for a lot of people, is an intimate experience," McGill said. "I find that as layers of clothing are shed, people let down their walls. Remarkably honest conversations and connections form. Hours pass and a painted armor emerges, one that we built together."

People visit McGill's home studio to create something special with him. "People travel to be painted because they don't have this experience where they're from," McGill said. "What I'm doing is so different from what other people do." 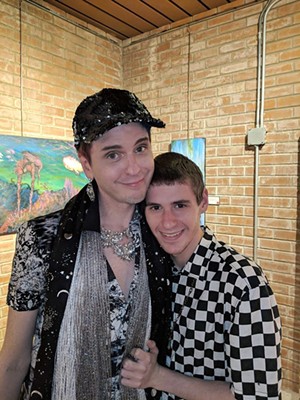 Brandon McGill and Best Tardy
Brandon McGill
For Maybe a Poem Might Fracture Things, no traveling was needed. Tardy took 28 of his poems, and McGill matched them with magical images.

"They are a collection of poems from when I was a teenager to now," Tardy commented. They collaborated on finding the best artwork for each poem as well.

"He'd say, 'I need a poem of this,' and I had to look through every photo I've taken in my life to see if I had it," McGill laughed. "We had to put in some of our favorite body paintings we've done together, and a lot we shot original art for it."

The book itself is a beautiful, colorful production filled with Tardy's stunning verse. Each poem is illustrated with photos of Best, or with meaningful shots of landscapes and skyscapes. The book itself opens with a poem called "The Kraken," which was a poem that fueled the project from the start.

The poem itself is a rallying cry for creativity, a collection of rhyming couplets that should be a go-to inspirational fight song for any artist, poet, or musician in the middle of the night. It is little wonder why this gave birth to the book.

The book begins with "The Kraken" but ends with an interesting note with the title poem.

"When I wrote the poem "Maybe a Poem Might Fracture Things," I had a thought that there was a lot of commonalities between love letters and suicide notes," Tardy said. It's a list poem that is both beautiful, heart-wrenching, lovely, and harrowing at once. It's unlike anything else in the book, but somehow ends it beautifully.

Maybe a Poem Might Fracture Things was released on November 11, in recognition of McGill and Tardy's first anniversary. For McGill, he said it was the "best of both worlds." The pun wasn't intended, but rather a perfect way for their love to intersect with their art. It is poetry in motion and beauty refined in a glorious volume of adoration.

McGill will now return to the project that's been occupying much of his time this year, a card-by-card interpretation of the tarot. It's set to be released as a full deck next year.

All of McGill's books are available for purchase at Shaneland Arts or by visiting McGill's website. He will also be painting at Dillard's at Superstition Springs Mall in Mesa on Friday, November 22.
KEEP PHOENIX NEW TIMES FREE... Since we started Phoenix New Times, it has been defined as the free, independent voice of Phoenix, and we'd like to keep it that way. With local media under siege, it's more important than ever for us to rally support behind funding our local journalism. You can help by participating in our "I Support" program, allowing us to keep offering readers access to our incisive coverage of local news, food and culture with no paywalls.
Make a one-time donation today for as little as $1.
Mitchell Hillman