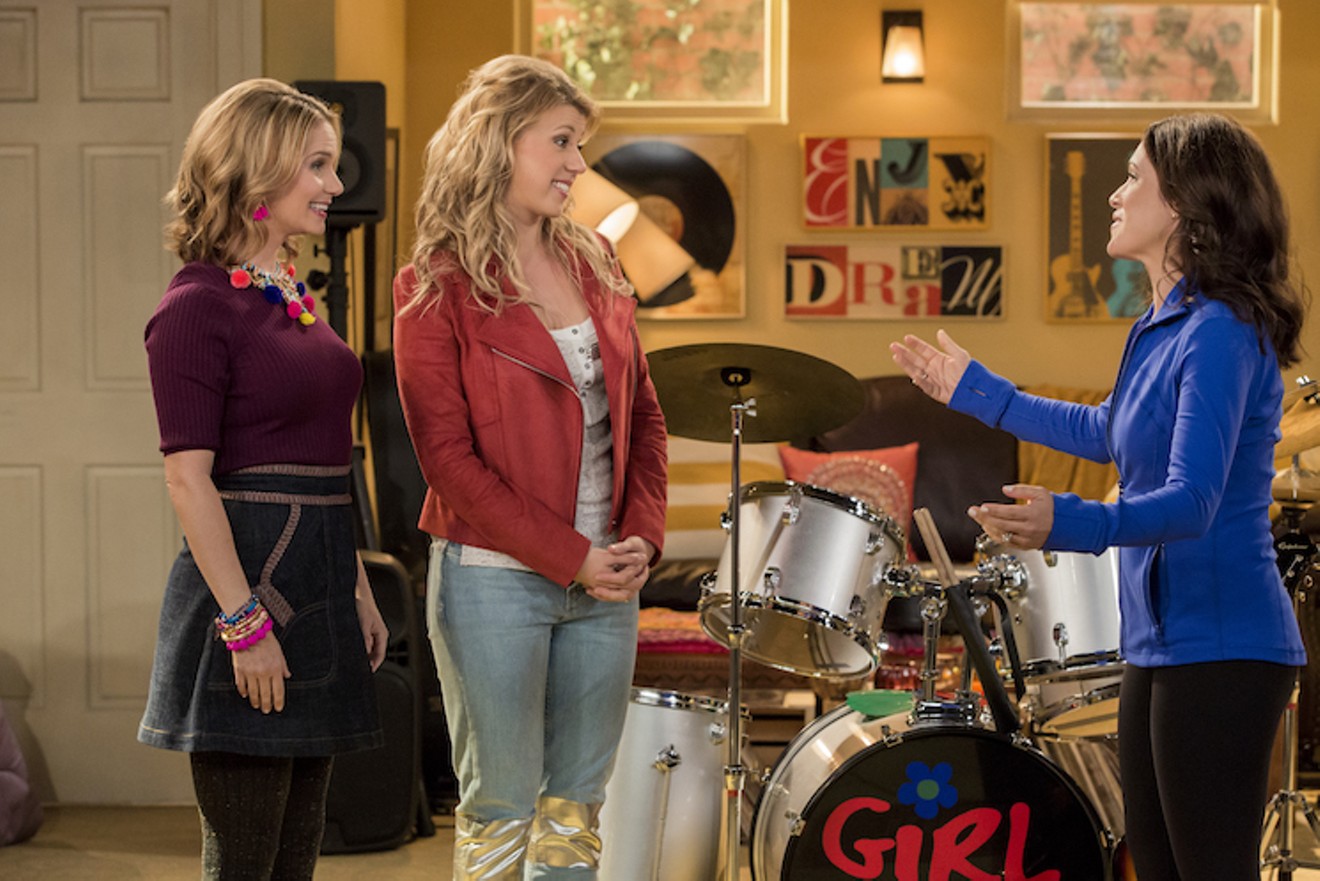 Gia's back, and she's swapped crop tops for a sensible fleece. Michael Yarish/Netflix
Every week, we're recapping Fuller House season two. We saw the sign of a Girl Talk reunion!

Last episode was nonstop chaos, with the O.G. cast dropping in for a big family Thanksgiving. Lots of people, lots of subplots, and lots of catchphrases. We find the house a much calmer and more normal place, with the welcome absence of the out-of-control Gladstones (who were supposed to stay another week, yikes).

DJ and Kimmy are going about their day with Tommy when Steph announces that she's written an awesome song for her boyfriend, Jimmy Gibbler. However, she really wants to play it with a full band. That sets off a light bulb in the usually dim brain of Kimmy Gibbler, who suggests they get the old band back together.

You may recall (and if you didn't, they provided a handy flashback) that Kimmy, Steph, their friend Gia, and some nameless girl were in a '90s alt-rock girl group. They played one show at the Smash Club and immediately imploded. Looking back though, it may have been a stepping stone on Steph's path of being a ~*world-renowned DJ*~.

Gia's back, and she's swapped crop tops for a sensible fleece.
Michael Yarish/Netflix
Although Steph is hesitant at first, she eventually gets on board. The drummer is long gone, so there's an opening for Rock Band champion DJ Fuller to jump in. They get together later that afternoon and rehearse in Steph's bedroom. They call up their old bassist, Gia Mahan (Marla Sokoloff), who is a full-fledged soccer mom, complete with minivan and yoga pants. Nevertheless, she's ready to rock. They get set up, which includes DJ dressing as Courtney Love and color coding the drum kit (like rock bands do). They decide to practice to the only song they know, "The Sign" by Ace of Base. As expected (because it's a really hard instrument!) DJ can't keep a beat, and the entire thing implodes - again.

The next day, they get back together, this time all dressed as Courtney Love. Miraculously, and without explanation, they're all able to play their instruments flawlessly. They finish a perfect rendition of "The Sign" and celebrate their official comeback. They take a break, and Gia announces that she wants to smoke. Dweeb Mom DJ is already on edge about Gia's former bad influence on Steph. (Remember the cigarettes? Crop tops? Make-out parties? Seriously, Gia was the best.) DJ immediately pounces and Gia explains that she didn't mean real smoking, just vaping. Because, remember guys, it's 2016 and of course she does.

When she offers it to Steph with an "all the soccer moms are doing it" move, DJ steps in and tells her to just say NO. They start to argue, and Stephanie jumps in to remind them that they need to get along for her project. That sets off Kimmy, who also wants to be the star (see: the shirt she made with her giant head). They all argue a while, talking on top of each other, when Steph finally shuts it down and tells them the group is officially disbanded - again. So, that's it for that. It was certainly fan service to make this happen, but also kind of underwhelming? What even happened to the song they were supposed to do? Was there even a goal here? We need someone to start a Kickstarter to get them back together - again - and make it really happen!

When memes attack.
Michael Yarish / Netflix
Elsewhere in the house, the teenagers (Ramona and Jackson) are fighting because Ramona broke in to Jackson's locker to take back the earbuds he took from her room. He's furious, although he doesn't really have a right to be, considering. Still mad, they both go off their separate ways with their friends. Jackson's skeezy friend, Popko is there (with whom Ramona shared her first kiss) and he announces that he's broken up with his girlfriend (who he brought over not long after the aforementioned kiss.) He's decided that now he wants Ramona and is going to go for it. He calls her into the boys' room and lets her know that he's totes available. "I saw you with Bethany on the same day you kissed me, so pass," she says. Yeah girl, know your worth! His friends saw this coming a mile away, and laugh at him mercilessly.

Later on, Ramona and Lola are getting ready to head to dance class. Lola gets a notification of a new message and opens up the link. She finds an animated video, which features a dancing hippo with Ramona's face, titled "Ramona Gibbler - The Dancing Hippo." She tries to hide it from Ramona, but it's too late — based on the view count, the entire class has seen it. She spins out, completely humiliated and vowing to never leave the house. Let's be real though, the video wasn't that bad. If this were Degrassi, you better believe that they'd go big with a sex tape or something truly mortifying.

Nevertheless, Ramona is devastated and immediately blames Jackson, assuming he was mad about the locker thing. He denies it, claiming a lack of tech savvy (uh, okay, sure). Even worse, Lola believes Ramona and has now completely written him off as a love interest. Jackson springs into action, grilling Popko who very obviously did it as payback for Ramona's rejection. He adamantly denies it, while walking off with DiGiornio pizzas from the freezer (product placement like whoa).

Ramona has a proper meltdown and confides in her mom, who reminds her that no one can tell her how to feel about herself (actually helpful, Kimmy!). The next day, she decides she won't stay in her room forever after all, and moves on with her life. Popko comes barging in, barking about a video he believes she posted of him. It's him skateboarding, but it's dubbed with fart sounds and the caption "Bobby POOP-ko." Okay, we're on board with that one, because he's truly the worst. She and Lola laugh, but she insists she had nothing to do with it. Jackson fesses up immediately, telling him it's payback. With the truth out in the open, Popko apologizes, and has the nerve to ask her out one more time, which she rejects, one more time. Unlike Popko, Jackson's chivalry helped his game tremendously, and Lola agrees to a lunch date. Good = 1, Evil = 0.

One flew over over the cuckoo's sustainable farm.
Michael Yarish / Netflix
Lastly, middle child Max is still working on his "One Kid Can Make a Difference" project (they study other things in third grade, right?). He's about a week away from presenting to the class about his sustainable farm. He goes outside to discover that all of his plants were destroyed by his four chickens. We find out later that he was the one who let them out of their coop so they could be free range. Oh, Max. This leaves him at square one, ready to accept his failure.

Fernando overhears this and refuses to let him give up. He tells him a story about his first professional outdoor race, where he crashed his car on lap seven and finished on foot. Somehow, this translated to, "let's replant your farm." They spend the afternoon digging new plant beds, but he's going to need a miracle to get things growing in time. Fernando pulls out bottle and places drops of blue liquid into the water, claiming them to be magic unicorn tears. Max believes in unicorns, OBVIOUSLY, but does not believe that their tears can be harvested. Fernando tells him the only way it'll work is if he believes, so he does.

The next morning, Max walks out to find his entire farm back to full form and then some. Fernando and DJ come outside and admire his work, which he credits to the unicorn tears. He pulls out a carrot, which has an organic sticker on it. Whoops. Max still doesn't realize what happened, which was that Fernando stayed up all night planting veggies that he bought at the store. Instead of scolding him for not helping teach Max the values of hard work and that failure is a part of life, DJ praises him for making her son happy. Fine, we'll roll with this one. Apparently, we needed a turning point to truly welcome Fernando into the fold, because we're clearly not getting rid of him for a while.