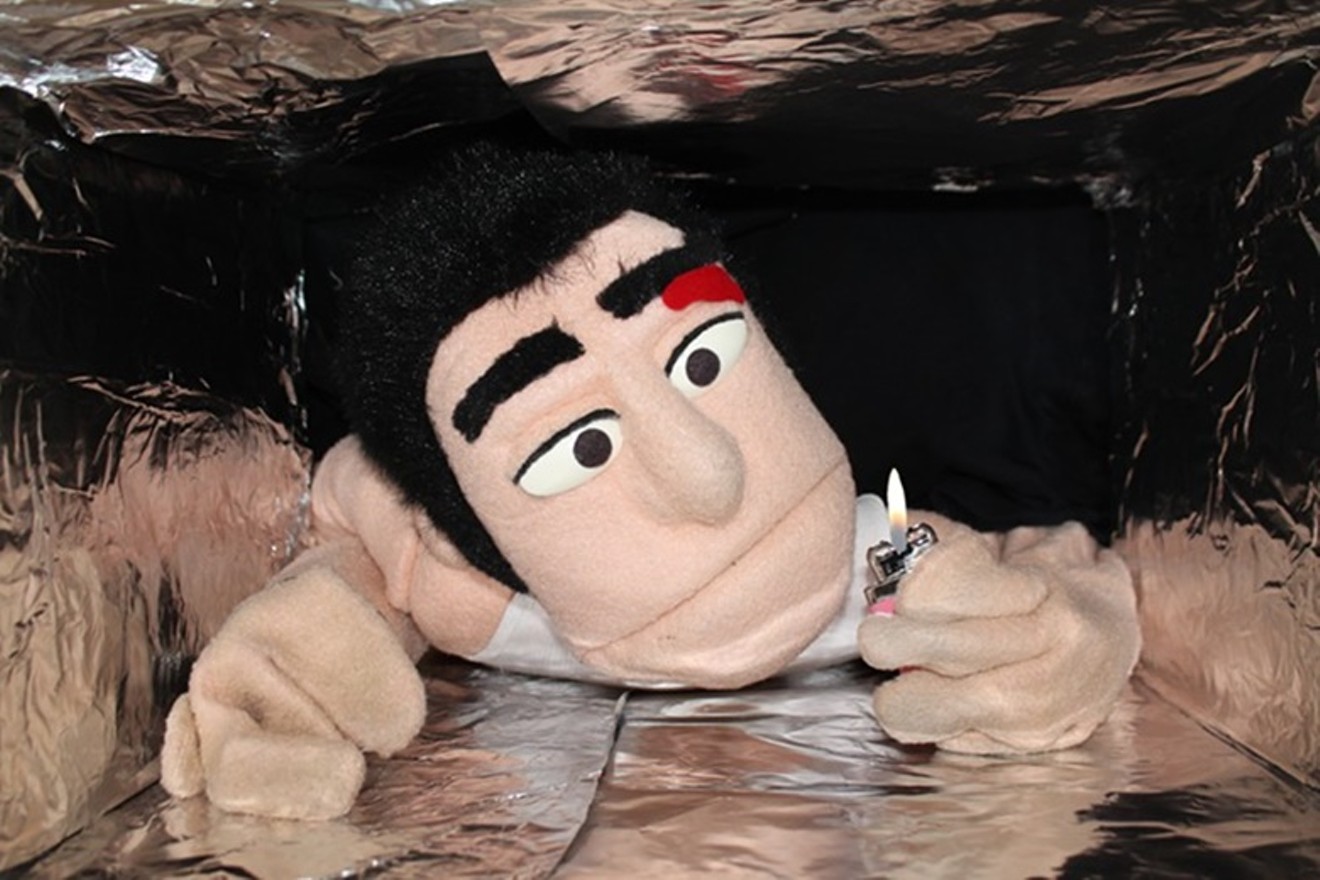 Come out to the coast, we'll get together, have a few laughs at All Puppet Players' staging of Die Hard: A Christmas Story. All Puppet Players
We’re officially in the holiday season in the Valley, which means bright lights and shopping events will both be in abundance. This weekend’s best things to do around town includes a bit of both, as you can check out the Fantasy of Lights street parade in Tempe or pick up gifts at Phoenix Flea or the Heard Museum’s Annual Ornament Marketplace. And if you’re in the mood for something fun, All Puppet Players is launching its annual staging of Die Hard: A Christmas Story.

Read on for more details about these events or click over to Phoenix New Times’ online calendar for more things to do from Friday, November 25, to Sunday, November 27.

Mill Avenue is no stranger to bright lights, owing to all the vibrantly illuminated bars, clubs, and restaurants lining the main drag through downtown Tempe’s nightlife district. This weekend, though, the scene will glow even more colorfully during the Fantasy of Lights Street Parade on Friday, November 25. Floats, vehicles, marching bands, and other participants in the annual parade will be adorned with strings of lights as they travel along Mill Avenue. The event kicks off at 4 p.m. with live music, food and drink, and a variety of vendors throughout downtown Tempe. The parade itself will start at 6 p.m. and will be followed by a tree-lighting ceremony at 7 p.m. Admission is free. You can find the full schedule here. Benjamin Leatherman
click to enlarge Gather round children, as we witness the miracle at Nakatomi Plaza. As much of a Christmas tradition as “The Little Drummer Boy” or eggnog, Die Hard gives you all the roaring fires and goodwill towards men you’ll ever need. Did we say goodwill? We meant bullets to the face. If you’ve ever wondered what it would be like to see John McClane and Hans Gruber duke it out as puppets, you’re in luck. Those irascible scamps at All Puppet Players are bringing back their hilarious tribute to John McTiernan’s action classic for the holidays. The year’s run starts on Friday, November 25, with performances taking place nightly at 7:30 p.m., Thursday to Sunday, at Playhouse on the Park, 1850 North Central Avenue, through December 30. Tickets are $42 for general admission to $55 for VIP admission. Please note: This puppet show is not for kids. Those yippee ki yays ain’t gettin’ bleeped. Ashley Naftule 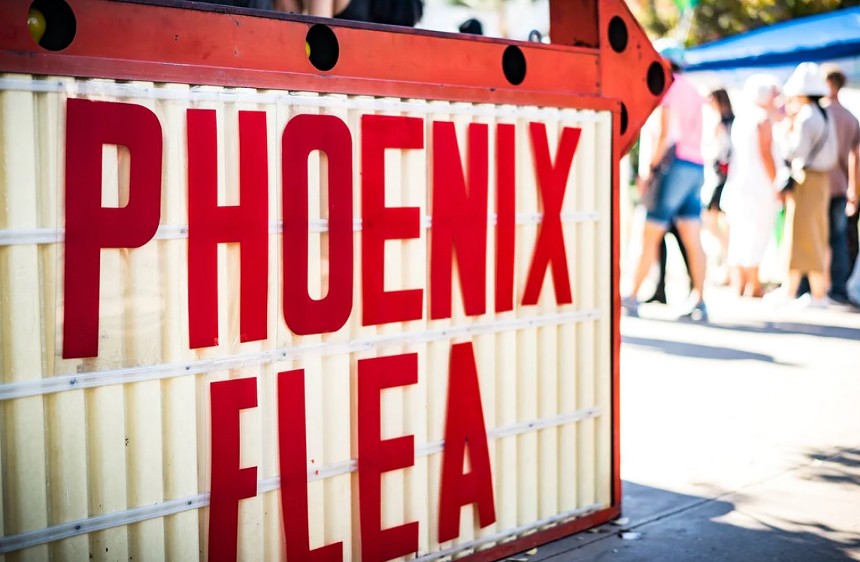 The Phoenix Flea market returns to Heritage Square, 113 North Sixth Street, from 10 a.m. to 5 p.m. on Saturday, November 25, which means you can take a bite out of your holiday shopping list while supporting Small Business Saturday. An admission fee of $5.28 gets you into the festive marketplace, where more than 125 vendors will be plying their wares — including fine art, fashion, vintage goods, culinary finds, and more. It’s a chance to shop local without running all over town, while you revel in good company and that fabulous Phoenix no-snow glow. Bring extra coin for food trucks and vendors, such as Waffle Love, Mustache Pretzels, and La Belle Vie Bakery. Click here for tickets and a complete list of participating vendors. Lynn Trimble

Grab a Big Wheel and head for Sunnyslope to relive your childhood.
John Morgan/CC BY 2.0/Wikimedia Commons

As any seven-year-old on a sugar bender could tell you, there are few kiddie-friendly thrills as epic as rolling down a hill at crazy speeds while riding Big Wheel tricycle, throwing caution (and good sense) to the wind. The members of the Arizona Cacophony Society, the local urban prankster and social group, will try to recapture this preadolescent exhilaration during the Big Wheel Open on Saturday, November 26, in Phoenix’s Sunnyslope neighborhood. Participants are encouraged to bring the namesake trikes (or similar plastic children’s vehicles) to the quiet residential intersection of Butler and 14th streets in the ‘Slope starting at 2:30 p.m. They can then “race that sucker down the hill,” according to the Society’s website, along with other riders. It’s not a competition, per se, so prizes or awards probably won’t be awarded, though you can earn plenty of “bruises, rashes and memories” from the experience. The event goes until dusk, it’s free to participate, and more details are available here. Benjamin Leatherman 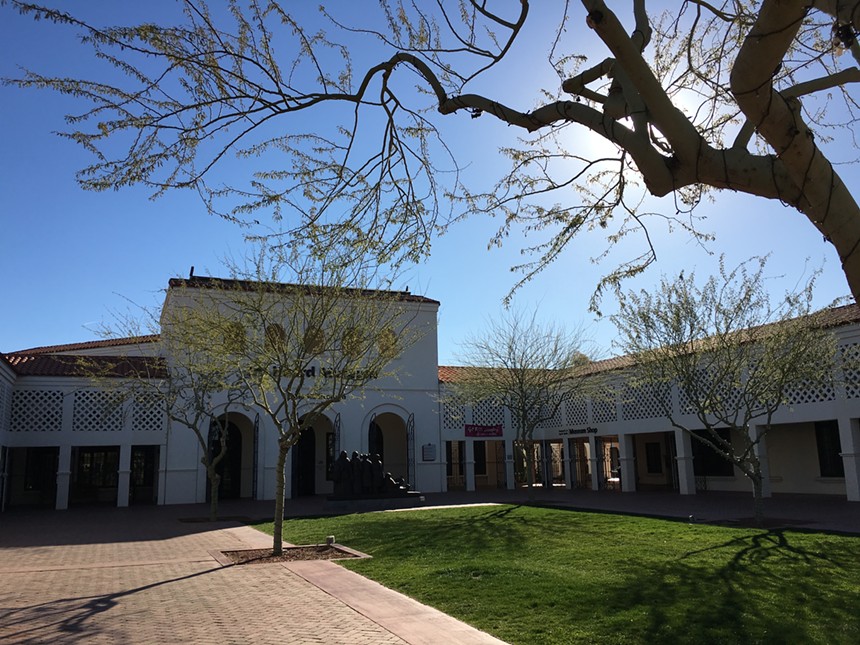 Hundreds of unique holiday decorations will hang on festive trees inside the Heard Museum Shop, 2301 North Central Avenue, during its annual ornament marketplace this weekend. Get there on Friday, November 25, when the shop is open from 10 a.m. to 4 p.m. That’s the first day of the free three-day event, which means you’ll have the best selection to choose from — including ornaments from elegant to whimsical, created with diverse materials such as metal, wood, fabric, and beads. There’s even a limited-edition sterling silver waterbird ornament with a connecting star by artist Tim Blueflint of the Bad River Band of Lake Superior Chippewa that will be signed and numbered (note: only 40 will be available for purchase). Hours on Saturday, November 26, and Sunday, November 27, are also 10 a.m. to 4 p.m. More information is available here. Lynn Trimble
click to enlarge If you’ve ceased believing in the Arizona Cardinals doing anything worthwhile this season after their recent soul-crushing loss to the San Francisco 49ers, you’re not alone. The number-crunching sports geeks over at 538 are predicting that the Red Birds only have a whopping 4 percent chance of making the playoffs at this point. Such dire odds aren’t stopping the Cardinals faithful from flocking to State Farm Stadium, 1 East Cardinals Drive in Glendale on Sunday, November 27, for a game against the Los Angeles Chargers. Arizona (4-7) will be the underdogs during the interdivisional battle against L.A. (5-5), who have a 33 percent chance of making the postseason. Kickoff is at 2:05 p.m. Tickets start at $30. Benjamin Leatherman
KEEP PHOENIX NEW TIMES FREE... Since we started Phoenix New Times, it has been defined as the free, independent voice of Phoenix, and we'd like to keep it that way. With local media under siege, it's more important than ever for us to rally support behind funding our local journalism. You can help by participating in our "I Support" program, allowing us to keep offering readers access to our incisive coverage of local news, food and culture with no paywalls.
Make a one-time donation today for as little as $1.