Artists Say Mural Vandalism Is on the Rise in Downtown Phoenix Selfie time with Lauren Lee's mural at monOrchid before it was vandalized. Lynn Trimble
A pair of wings painted by artist Lauren Lee in Roosevelt Row in 2018 was vandalized last month with graffiti that almost covered the piece. It's part of a larger trend, some artists are saying, of a rise in graffiti downtown that is damaging existing murals.

“There has been an extreme attack in the last few weeks, intensifying each day,” artist Jeremy “bacpac” Franko told Phoenix New Times a few weeks back. “Taggers are bombing decent murals with bubble letters.”

Lee’s mural is located on the west-facing wall of the monOrchid building, where another mural featuring hundreds of birds in flight was painted by Brian Boner in 2016. Like other murals in the area, they’re popular backdrops for the selfie set. 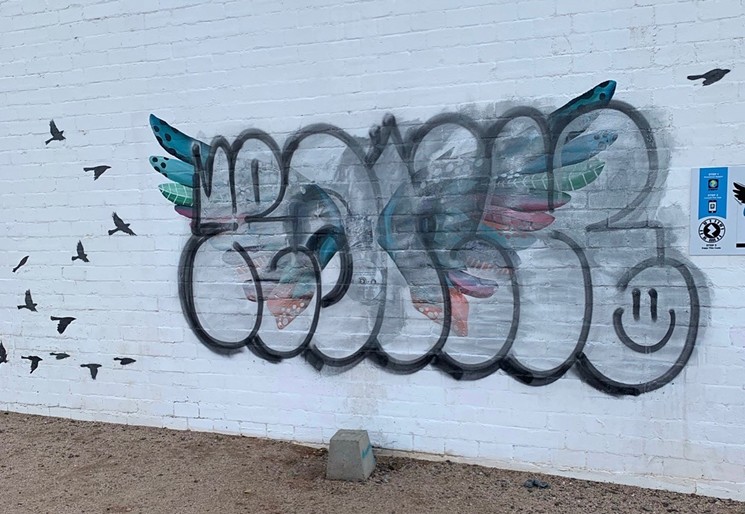 
Several Roosevelt Row murals have been defaced in recent years, part of what's perceived to be a backlash against gentrification pushing out local artists. In 2018, someone used gold spray paint to deface an iconic El Mac and Augustine Kofie mural on the Flowers building at Roosevelt and Fifth streets.

Other areas have been hit as well. For many years, taggers have been defacing the 1998 Prayer of St. Francis mural painted by Rose Johnson, a maven of the early Phoenix arts scene who died in 2009. She painted the piece at a building on 16th Street south of Thomas, in an area where artists protesting Arizona’s anti-immigrant SB 1070 law later launched their Calle 16 mural project.

The scale and style of the graffiti varies. Lee’s art was nearly obliterated, but Franko notes that a Beyoncé and Jay-Z mural painted by the artist Giovanni "Just" Dixon on McDowell Road got vandalized with just a booger painted on one of the noses.

Lalo Cota, an artist whose murals have graced myriad spaces from Barrio Café and Carly’s Bistro to the downtown sports arena, is among those who’ve noticed a recent uptick. “It’s usually done because their tag will run longer,” he says. (This means that it usually takes longer to fix a defaced mural than it does to paint over graffiti on a blank wall.)

Over on Grand Avenue, they’re also seeing an increase in graffiti, according to Beatrice Moore, an artist and property owner who heads a group called Grand Avenue Arts & Preservation.

“Most of the tagging in our area seems to happen on Friday nights,” she says.

Moore suspects that different people are doing the tagging, and says that some have been captured on security cameras. One particularly prominent Grand Avenue mural, painted by Phoenix artist Luster Kaboom on Citywide Studios, was tagged a few weeks ago. “It is unusual for people to tag other artists’ murals,” Moore says.

Greg Hawk, who opened his Hawk Salvage business on Grand Avenue in 2019, says there was a “big attack” in mid-January this year and that “there’s been a lot of tagging in the area since then.” Hawk says he filed a police report about graffiti at his location on January 19 and included information from others with graffiti damage. New Times is working to secure a copy of that report.

People have floated various theories about what’s motivating the perpetrators.

“There’s been some speculation that it could be retaliation with the car club,” Hawk says, a reference to a recent controversy over Saturday night events that drew big crowds to Grand Avenue. The event got shut down after several residents and business owners cited problems with noise, trash, and traffic violations.

"I imagine the graffiti has increased because Phoenix has been growing so fast: people moving here and downtown booming," says David Quan (who goes by Luster Kaboom). "Also, everyone wants to be heard right now. Graffiti can be a form of protest for whatever cause. All these artists are fighting for notoriety."

Others say it’s a sign of the times. “I’m thinking maybe people are bored or they’re frustrated by the economy and the pandemic,” says Beth Malapanes. She’s spotted graffiti at several sites in recent months — including a mural-covered wall in a downtown historic neighborhood and the building near Grand Avenue that once housed the Unexpected Gallery.

One downtown artist New Times spoke with asked not to be identified for fear of retaliation said, “I was told by a local muralist that there is a tagging war going on between two groups." Though it seems to be increasing, murals getting defaced by graffiti is not a new problem in downtown Phoenix: El Mac and Augustine Kofie's mural on the Flowers Building in Roosevelt Row was damaged three years ago this month.
Lynn Trimble

The graffiti hasn’t stopped local muralists, who are continuing to produce work around the city. Gizette Knight organized a Black History Month project that includes 28 murals, and two mural festivals are happening in February and March — one along the Grand Canalscape and another in the Oak Street alley off 14th Street.

Some are taking steps to protect these outdoor artworks. “More people are getting surveillance equipment,” says Hawk, whose shop is located near the Eleventh Monk3y studio that got robbed in late December. Others are using protective coatings, which can turn artwork yellow or cause paint to peel in the sun, according to Phoenix Mural Festival founder Danielle Foushée. Franko is taking a more direct approach, sharing overnight watch duties with others in areas where she suspects murals might get vandalized.

Meanwhile, the city of Phoenix has announced on January 29 that February is Graffiti Free Awareness Month. It’s an effort designed to reduce graffiti while alerting community members to city resources, including the Graffiti Busters program housed in the Neighborhood Services department.

“Graffiti Busters crews are sent out on a complaint basis,” according to city spokesperson Tamra Ingersoll. “They work seven days a week, and the goal is to remove graffiti within 24 hours of the complaint.” It’s a free service, but property owners have to sign a permission slip before crews get to work.

Last year, she says, the city spent $3.8 million and used 9,800 gallons of paint to cover 47,988 graffiti sites across the Valley. “All tags are logged with pictures and geotags and then are sent to the detectives.” Her numbers don’t include a breakdown of how many incidents involve graffiti done on existing murals. Some of the worst graffiti on Rose Johnson's iconic mural.
Lynn Trimble

Sometimes property owners or neighborhood groups tackle the cleanup themselves. “Our staff and board have in the past personally helped clean up the vandalism in some areas,” says Amy Otto, executive director for the Roosevelt Row Community Development Corporation. “The biggest piece of advice that we have for property and business owners is to take care of instances of graffiti as soon as possible, as tags that stay awhile become targets for future vandalism.”

“I try to encourage artists to clean up their murals as soon as possible if they get written on,” says Cota. “When it doesn’t get cleaned up, the mural usually ends up being destroyed.”

As for the people destroying others’ artwork, Franko offers this perspective: “If you really enjoy using spray cans to make your statement, perhaps you should find a blank wall and do a real piece of art.” She’s quick to embrace the rights of free expression and freedom of speech, but cautions against destroying other artists’ work.

“Do it the right way and really earn respect,” she says. “I can see your skills. But you are wasting them.”
KEEP PHOENIX NEW TIMES FREE... Since we started Phoenix New Times, it has been defined as the free, independent voice of Phoenix, and we'd like to keep it that way. With local media under siege, it's more important than ever for us to rally support behind funding our local journalism. You can help by participating in our "I Support" program, allowing us to keep offering readers access to our incisive coverage of local news, food and culture with no paywalls.
Make a one-time donation today for as little as $1.