Everything You Need to Know About the Jeopardy! Anytime Test Jeopardy! host Alex Trebek. Sony Pictures Television
Brainiacs, geniuses, and trivia geeks: Want to show off your smarts for a national audience by spouting off some knowledge in the form of a question?

Jeopardy! is holding one of its anytime online tests, which could be the first step for potential contestants to get on the popular and long-running game show.

A few million eggheads and bookworms across North America will be taking the 15-minute, 50-question quiz as they shoot their shot at geeky fame, fortune, and potentially a lot of dough.

The test, which covers the same sort of knowledge and categories that are seen on the show, will be conducted on the Jeopardy! website until the end of April.

If you think you’ve got the smarts to get on the show and maybe be the next James Holzhauer or Ken Jennings (who won the Jeopardy! The Greatest of All Time tournament earlier this year), we’ve got all the info you’ll need to know about the latest online test.

They need to know how to get a hold of you to get you on the show, right? Visit the Jeopardy! website to register to take the test.

There’s a 30-question version of the online test on the Jeopardy! site that mimics the experience (albeit with fewer questions). It’s a good way to familiarize yourself with the actual format and gauge your smarts.

There’s also the daily J!6 game, where you pick six Jeopardy!-style categories that cover pop culture and general knowledge and answer a single question from each.

Bone Up a Little


Look, we know it’s unlikely you’ll absorb the sum total of human knowledge, but you can sharpen your wits or refresh your memory about the works of Shakespeare or world geography.

Consider playing a few rounds on quiz sites like Triviaplaza, Sporcle, or JetPunk to help get your brain into shape.

You could also surf through the J! Archive, an exhaustive online compendium of every single episode of the modern version of Jeopardy! that’s aired since 1984, including every answer that Trebek has asked about over nearly four decades. (Every. Single. Question.) Since Jeopardy! producers are known to repeat categories and answers on occasion, it wouldn’t be a bad idea.

Go to the Jeopardy! site, click on the “Jeopardy! Anytime Test” button, and then get logged in.

A “Launch the Test” button will then appear, which launch a new window where the test will occur. You'll have a 30 second countdown before the test begins.


As you can see in the video above, you’ll have 15 seconds per question to answer once things get going. Be calm, since (realistically) you don’t have time to freak out. Just type your answer as quickly as possible and move on.

Are you drawing a blank on a particular answer? Just take your best guess, because anything is better than nothing. You won’t be penalized for a wrong answer and might just get lucky. Or you could always put down “Turd Ferguson” just for laughs.


According to producers, proper spelling isn’t a requirement for scoring the right answer on the test. So it’s cool if you can’t remember the correct spelling of Tchaikovsky, Dashiell Hammett, or antidisestablishmentarianism.

In other words, don’t sweat the typos. 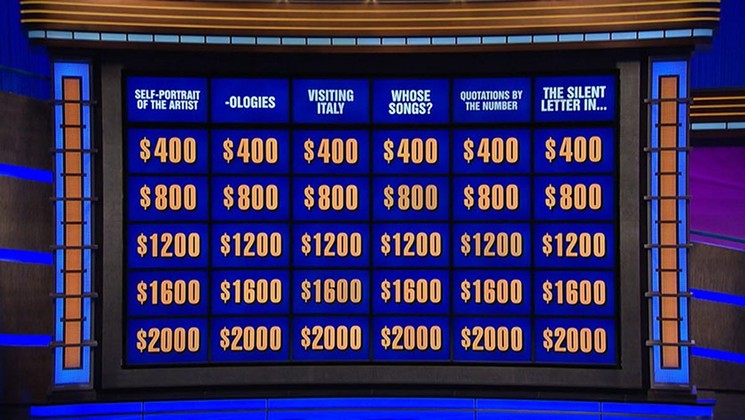 The Jeopardy! board.
Sony Pictures Television

If you get enough answers right (more than 85 percent, according to prior Jeopardy! contestants), you might be tapped to audition.

There, you’ll take another 50-question test (this time, a written one) with those who prove their smarts once again getting to play a mock version of the game so Jeopardy! producers can see how lively and entertaining you are when showing off your brainpower.

And if you survive all that with flying colors, you’ll be entered into the Jeopardy! contestant pool and may be tapped to be on the show sometime in the next 18 months.

Editor's note: This story was originally published on March 6, 2018. It was updated on April 17, 2020.
KEEP PHOENIX NEW TIMES FREE... Since we started Phoenix New Times, it has been defined as the free, independent voice of Phoenix, and we'd like to keep it that way. With local media under siege, it's more important than ever for us to rally support behind funding our local journalism. You can help by participating in our "I Support" program, allowing us to keep offering readers access to our incisive coverage of local news, food and culture with no paywalls.
Make a one-time donation today for as little as $1.