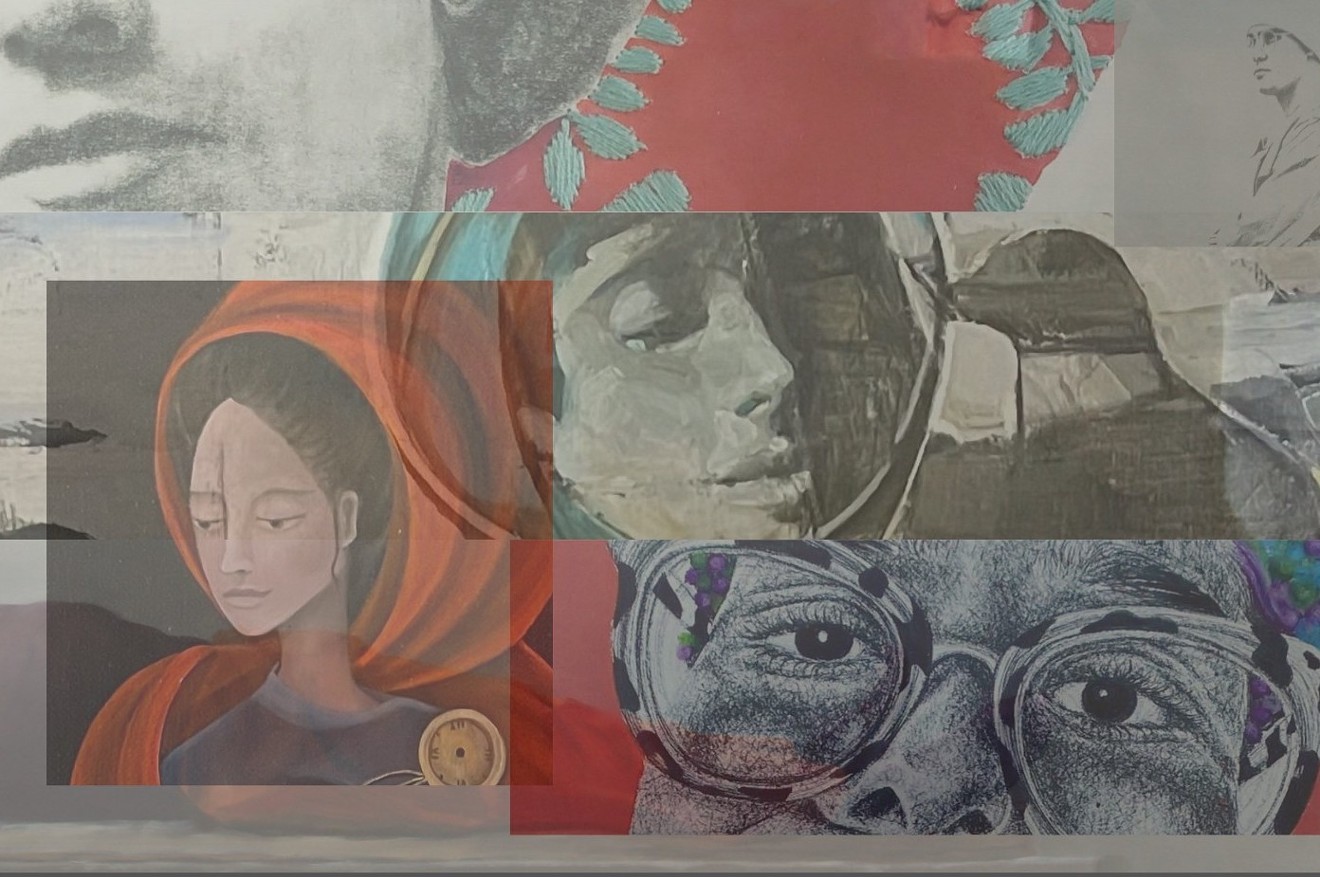 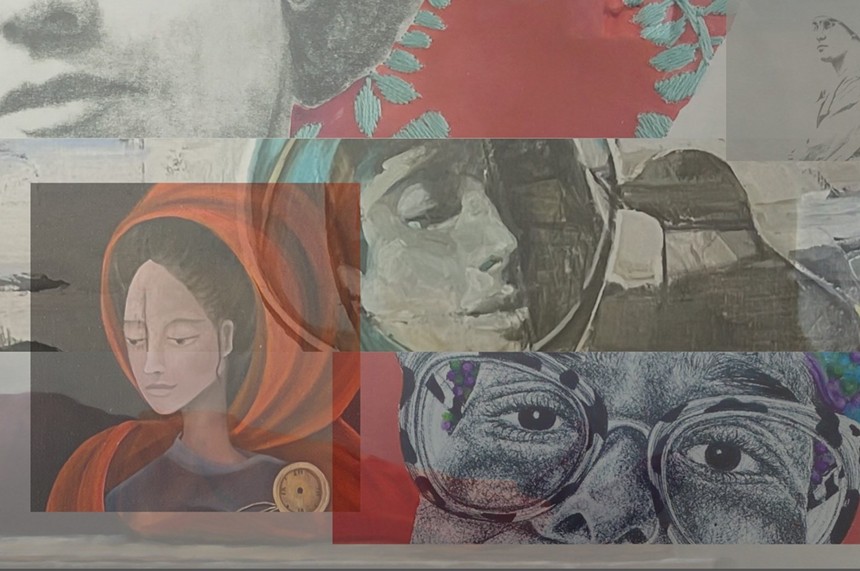 See works by several artists in "Faces and Identities" at 9 The Gallery.
9 The Gallery
New exhibits. Art parties. Free museum admission. There’s a lot going on during October First Friday, so here’s a quick look at 20 (mostly-free) options to help you plan your night. Pro tip: Check vaccination and mask requirements before you head out.

Make your way to 9 The Gallery to explore the new “Faces and Identities” exhibition featuring works by more than a dozen artists, including Antoinette Cauley, Falah Saeedhi, Chris Vena, and Shoreigh Williams. There will be a cash bar by Kaizen during First Friday hours, which are 6 to 9 p.m.

Alwun House is holding the opening for its "Monsters Menagerie" show during First Friday, when you can see dark and fantastical works by over two dozen artists working in multiple mediums, including Thrift Creeper, Jimmy Fike, and Holly Shoemaker. A panel of judges will be selecting three artists to receive $500 cash prizes. The opening reception on First Friday kicks off at 6 p.m.

The Children’s Museum of Phoenix has free admission during First Friday hours from 5 to 9 p.m. The museum is filled with ongoing hands-on exhibitions for children, with activities focused on art, building, and more.

The Eye Lounge artist collective is presenting “Not Home,” a solo exhibition by Kat Davis that explores her parents' lives. First Friday hours are 6 to 9 p.m.

Artists Chela and Edgar 8ahau Fernandez will be showing watercolor, graphite, gouache, and ink on paper artworks in their “El Regresso del Colibri” exhibit at Fair Trade Café, where First Friday hours are 5 to 7 p.m.

You’ll find works by more than 50 artists on view in "Piecing it Together" at First Studio, where First Friday hours are 6 to 9 p.m. Featured artists include Edna Dapo, Angela Isaac, Charissa Lucille, Joanna Proffitt, Ping Wei, Kristin Wesley, and Cheyenne You.

Explore works by Deborah Hodder, member of the Five15 Arts collective, in her new exhibition titled “Evolution: Microcosm to Macrocosm.” The exhibition is focused on transitions and central themes in her body of work spanning three decades. First Friday hours at Chartreuse are 6 to 9 p.m.

Heard Museum will have free admission during First Friday hours from 4 to 8 p.m., when you can check out numerous ongoing exhibitions in addition to the “Small Wonders” exhibit featuring jewelry and other small-scale creations.

The Icehouse is presenting “The Ghost Within,” which includes works by Sean T French, as well as collaborative pieces created with Mike Butzine, Michelle Meyer, and Cody Hunt. Expect new works, including fire-emitting pieces, as well as projection art and live performance. First Friday hours start at 7 p.m. and continue through 1 a.m.

Reserve a spot ahead of time if you want to explore the Japanese Friendship Garden, where admission is by voluntary donation during First Friday hours from 5 to 8 p.m. The last entry time is 7:30 p.m.

The “Just 10” exhibit at Olney Gallery highlights 10 women artists whose work ranges from realistic to abstract, and from figurative to landscape. The lineup includes Dyanne Fiorucci, Sandra Garvey, Barbara Lacy, and Carolyn Toliver. First Friday hours are 6 to 9 p.m.

Phoenix Art Museum has admission by voluntary donation during First Friday hours from 3 to 7 p.m. You can also get a reduced ticket price for their newest special exhibition, a retrospective of works by Colombian artist Oscar Muñoz which is titled "Invisibilia."

Head to Raiz Gallery inside Palabras Bilingual Bookstore to see a “Spaces Between” featuring a new series of works by Shela Yu. Look for Navajo cuisine by The Rez and coffee by Hakiri Coffee while you’re there. First Friday hours are 6 to 9 p.m.

Check out artworks by Michael Viglietta during his new “Variants” exhibition at Sisao Gallery inside Oasis on Grand. First Friday hours are 6 to 10 p.m.

An ASU group called The Art Grads is showing works by more than two dozen artists in its “TAG Exhibit” at Step Gallery, where First Friday hours are 6 to 9 p.m. Check out works by Memo Gutierrez, Yee Jae Kim, Miguel Angel Monzon, and Aubrey Zwickel while you’re there.

Walter Productions is celebrating the re-opening of its Walter Where?House creative space following a pandemic pause with a First Friday lineup that includes performance by The Sponges, art cars, and artwork by numerous creatives. Tickets start at $13 and you must be at least 21 to attend. The event starts at 9 p.m. and continues through 2 a.m.

See how artist Louis Giordano blends urban history and design in this exhibition of prints titled “1000\PULLS, which will be on view at Xico Arte y Cultura during First Friday hours from 5 to 8 p.m.
KEEP PHOENIX NEW TIMES FREE... Since we started Phoenix New Times, it has been defined as the free, independent voice of Phoenix, and we'd like to keep it that way. With local media under siege, it's more important than ever for us to rally support behind funding our local journalism. You can help by participating in our "I Support" program, allowing us to keep offering readers access to our incisive coverage of local news, food and culture with no paywalls.
Make a one-time donation today for as little as $1.