Eye Lounge shows contemporary art by emerging and established artists. It launched in 2000, and moved to the current Eye Lounge gallery in 2001.

Despite diverse backgrounds, all three new members have at least one thing in common. They’ve all spent years making art and working in arts administration.

Work by Bob Allen.
Courtesy of Eye Lounge
Allen was interim director for the Phoenix Office of Arts and Culture in 2010, and served as deputy director at the Phoenix Convention Center for many years. Scherer was artistic director at Shemer Art Center from 2015 until earlier this year.

Todorova became major and planned giving officer at Phoenix Art Museum in February, after working in development at ASU Art Museum since 2013. Basically, she builds relationships that foster financial gifts.

All three studied art in college.

Todorova earned her master of fine arts degree in drawing and painting from ASU in 2013. Scherer holds a bachelor of arts degree in art and elementary education. For Allen, college was punctuated by time serving in the U.S. Navy.

Of course, gallerygoers are more interested in what they create.

Todorova works in drawing, printmaking, and installations to explore the concepts of time and transformation. In 2015, she showed work inside a small Eye Lounge space called the project room. 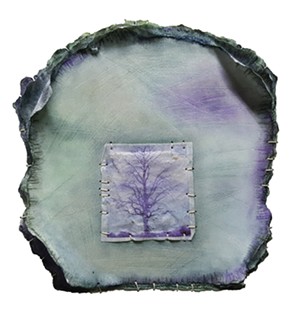 More than 100 artists have been part of Eye Lounge through the years, including Ann Morton, Daniel Funkhouser, Joe Willie Smith, and Denise Yaghmourian.

Several former members have created works of public art, and had solo exhibitions at various galleries, museums, and other art venues in and beyond Phoenix.