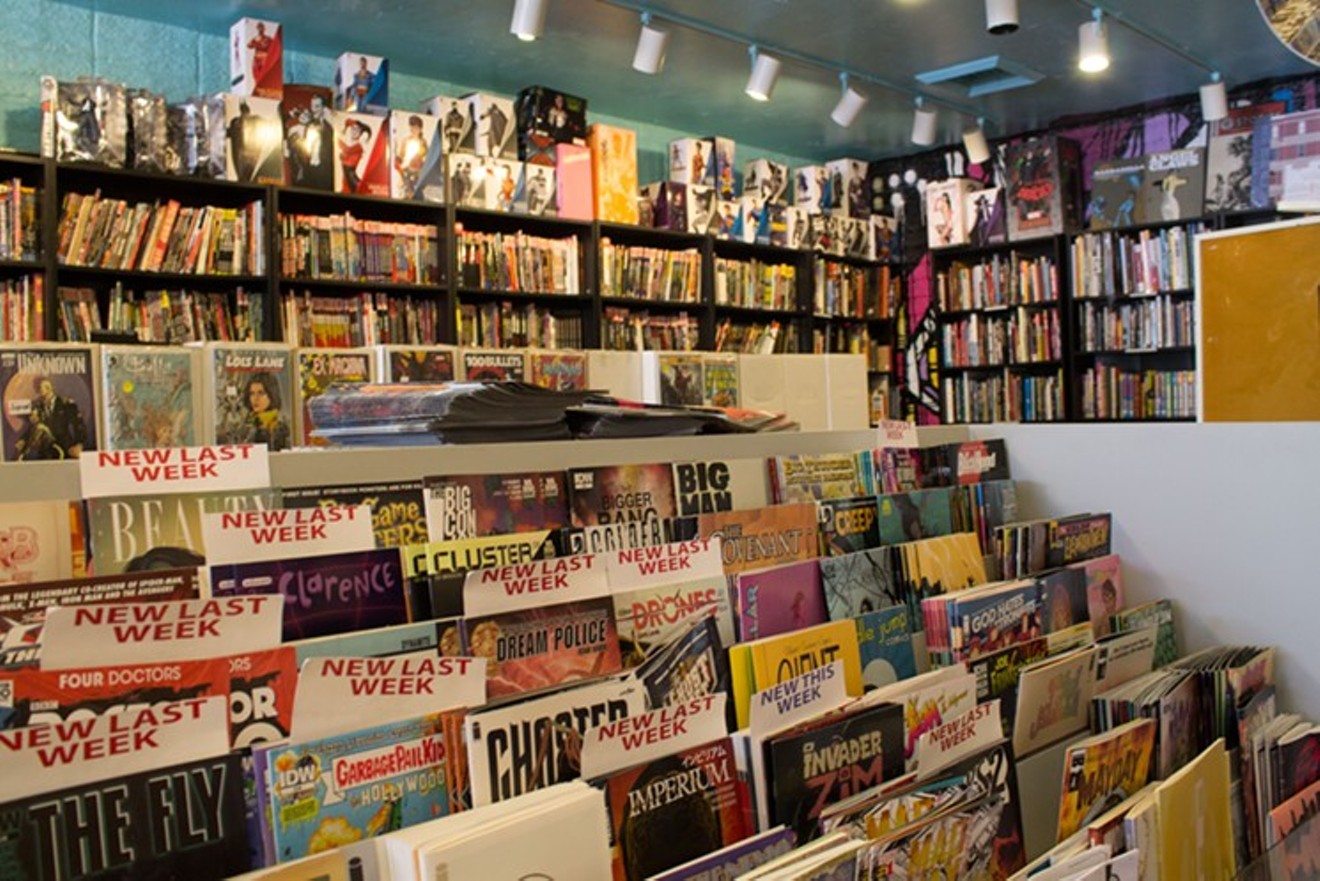 It's storytime. Sara Weber
Bored this weekend? Don't be. Instead, catch comedian Joel McHale, check out the Fiesta Bowl Parade, or have a nerdy new year at the Grid. For more things to do, visit Phoenix New Times' calendar.

Untidy Secrets Storytelling
We’ve all done shit that we feel bad about. In plenty of cases, we’ve realized the errors of our ways and tried to remedy it with an apology. Then there’s the stuff we know we should feel bad but aren’t remorseful over in the least. At the Friday, December 29, installment of Untidy Secrets Storytelling — a monthly storytelling, zine-swap, and networking event — a group of readers including Jason Simons, Ashley Naftule, Jessie Balli, Aaron Valdivia, Maya Tatum, and Courtney Wielgus will reveal personal tales that fit into that latter category.

Hear what they’re unapologetic about from 8 to 10 p.m. at Ash Avenue Comics, 806 South Ash Avenue, in Tempe. Admission is free. Chairs are limited; feel free to bring your own. Visit the Facebook event page. Amy Young

And your host, of course, Joel McHale.
Cliff Lipson/CBS
Joel McHale
The Soup is gone, and Community was canceled, but Joel McHale remains as busy as ever. When he’s not guest-starring on various television shows, the actor and comedian gearing up for his return as Tad O’Malley, the talk show host who specializes in conspiracy theories on the upcoming season of The X-Files.

Last year, McHale made his first foray into publishing with his self-help memoir Thanks For The Money, written with the trademark snarky tone that made him such a draw on the stand-up circuit.

Phoenix somehow made McHale’s nice list this year, as he is closing out the last three nights of 2017 with a series of shows downtown at Stand Up Live.

The laughter begins at 7:30 p.m. on Friday, December 29, at 50 West Jefferson Street. Tickets are $35. For more information, visit the Stand Up Live website. Jason Keil

See the free exhibition at The Hive art gallery, 2222 North 16th Street, during the opening reception from 7 to 10 p.m. on Friday, December 29. The show features work by eight artists who’ve collaborated to reimagine, rewrite, and redraw all 24 pages of Ravage 2099, #1. The pages will be displayed sequentially, so gallerygoers can experience the first account of Ravage 2099’s Orwellian world.

News junkies welcome.
Courtesy of Valley Bar
Year in Review Trivia 2017
Revisiting the last 12 months might not be good for your mental state, but it could lead to fun and prizes. You and up to five of your news junkie friends can battle it out during Year in Review Trivia 2017 at Valley Bar. Teams will be asked 20 questions on topics including news, sports, and pop culture during the game night, which is also a benefit for Central Arizona Shelter Services (C.A.S.S.). The two groups with the most points will be awarded prizes, and so will the team that raises the most money for C.A.S.S.

Fiesta Bowl Parade
As if traffic on Central Avenue weren’t slow enough, once a year the city of Phoenix allows the Fiesta Bowl Parade down the pivotal thoroughfare that separates the streets from the avenues. Were it not for the Fiesta Bowl, a boon for the Valley’s economy that takes place during the holidays, the parade might just be a nuisance. But doldrums be damned, the annual event delights onlookers who relish the celebration. Maybe they’re onto something. Join Zoppé in celebration of its 175th anniversary through Sunday, January 7, 2018, at 250 North Arizona Avenue in Chandler. (Look for the enormous tent on the Chandler Center for the Arts campus.) Saturday, December 30’s showtimes are 2 and 7 p.m. Tickets are $15 to $40 at the Chandler Center for the Arts website or 480-782-2680. There’s also a circus camp on-site next week for kids ages 8 to 13 — check the website. Julie Peterson