Get your costume ready, Phoenix Fan Fusion is here. Benjamin Leatherman
Its name may have changed a couple of times in recent years, but Phoenix Fan Fusion is just as geeky as ever. This year’s edition of the annual pop-cultural extravaganza runs from Thursday, May 23, to Sunday, May 26, and will offer four days of nerdy activities, including gaming sessions, panels, Q&As, cosplay events, and a wealth of programming.

There will, of course, also be special guests, including a ton of celebrities and famed comic book creators. As a matter of fact, if a con is ultimately judged on the number of big names it features, Phoenix Fan Fusion is definitely going to be huge.

It’s one of the most high-profile lineups of special guests that the event (formerly known as Phoenix Comicon and Phoenix Comic Fest) has had since its debut in 2002.

Fan Fusion spokeswoman Kristin Rowan says that organizers put a lot of hard work into making it a reality.

“Every year, we look for the guests that people are asking for. We also look at popular TV shows, popular movies, and the old standby franchises like Star Trek and Star Wars, and try to figure out who to go for,” Rowan says.

Other factors come into play, too, she says.

“Sometimes, it's just a matter of timing; sometimes, we just get really lucky,” Rowan says. “Our talent relations director [Sara Klick] did an amazing job of getting the right people. Sometimes, things just really fall into place, and they definitely did this year.”

Like any con, Phoenix Fan Fusion will offer more than just celebrity appearances. There are thousands of panels and programming events taking place across the weekend, many devoted to such geeky subject matter as anime, sci-fi, fantasy, and horror films. There will also be two exhibitor halls, an Artists Alley, various discussions, nerd-oriented activities, and tons of cosplay.

If you’d like to keep track of everything that’s happening, we've put together a rundown of absolutely everything you need to know about Phoenix Fan Fusion 2019. 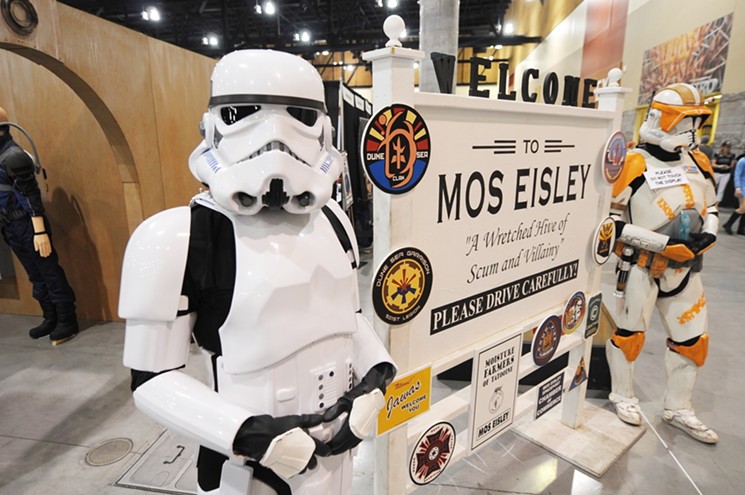 Two costumed troopers keep watch over the Star Wars section of the exhibitor hall.
Benjamin Leatherman
When and where is it? Phoenix Fan Fusion 2019 runs from Thursday, May 23, to Sunday, May 26, at the Phoenix Convention Center, 100 North Third Street.

Are there age limits? Nope. Fan Fusion is an all-ages event. Still, certain adult-oriented programming and activities are for the 18-and-over crowd only.

How do I get there? Light rail is your best option. There are stations nearby, and fares are $2 for a single ride, $4 for the whole day. Note: westbound trains won't be making stops at the station at Third and Washington streets between 10 a.m. and 3 p.m. each day. Instead, you can deboard at the Central Avenue and Washington station, which is only a five-minute walk from the convention center.

Where should I park? Stick with a garage. Fees are typically $20 and up for the day. For discounts or to reserve a spot, check out the Fan Fusion website.

How can I get around? You can take a pedicab for $10 to $20 per ride, a Grid bike for $5 an hour, or hit up either a taxi or ride-sharing service (fares vary) to get to and from your car, a hotel, or a nearby eatery or bar.

What will getting inside Fan Fusion be like? The area surrounding the convention center will be enclosed to create a security perimeter. That includes the area along Third Street between Monroe and Washington streets. There will be entrance points at either end, each with prop-checking stations and security screening areas. Bag checks and metal detectors will be used.

Security checks a prop at last year's event.
Benjamin Leatherman
Fan Fusion organizers will try to keep the screenings operating as efficient as possible, Rowan says. She estimates that the experience will take no more than six minutes from start to finish.

"We're hoping to keep the security process as smooth and quickly moving as possible," Rowan says. "We're trying to eliminate as much time spent waiting, especially outside."

What’s with the wristbands? Everyone will be issued one at tents located outside the perimeter. Each contains an RFID tag that will be scanned upon entry and you’re required to wear it at all times. No exceptions.

Should I drink water? Actually, we can’t stress enough the importance of staying hydrated. It might be cooler than normal right now, but you’re going to be walking around for most of the day and it's still going to be quite warm. As such, you should be drinking water frequently.

What can I eat? Snacks, lunches, and other outside food and drinks are allowed at Phoenix Fan Fusion, within reason. If you’d prefer to get something while you’re there, you’ve got no shortage of options. The North building features a food court on its first floor with a half-dozen or so fast-casual establishments. The West building features a sandwich spot and Starbucks. Meanwhile, both exhibitor halls have concession stands available.

Meanwhile, downtown Phoenix features a wide variety of restaurants, cafes, bars, and other places you can grab a bite.

Can I wear a costume? Absolutely. This is a geek event, after all. There will also be multiple events devoted to cosplay, ranging from workshops about crafting your own gear to several different fashion shows. Plus, the annual masquerade from 8 to 11 p.m. on Saturday in West 301BCD is not to be missed. Visit the Fan Fusion website for details and schedules.

What props are allowed? Lightsabers, wands, sonic screwdrivers, unstrung bows, untipped and non-removable arrows, and lightweight plastic or foam bats/clubs are all permitted. Shields and armor made from plastic, foam, fiberglass, resin, or cardboard are also acceptable, provided there are no sharp edges. Metal shields and armor can be brought in but might hinder the screening process.

What props aren't allowed? Any sort of real or replica weapon. Or anything resembling a gun, bomb, or explosive device. Tasers, slingshots, brass knuckles, metal and wooden swords, edged weapons, and glass or stone props are also banned.

What about comic book artists? Yup, they’ll be there, too, ranging from legends like Dennis O’Neil, Neal Adams, and Howard Chaykin to such comics creatives as Brian Pulido, Jeff Pina, and Val Hochberg.

How much are celebrity photos and autographs? Prices vary per guest. Summer Glau is charging $40 for autographs and $60 for a photo op, for instance, but a picture with Jeff Goldblum goes for $120. Check out the Fan Fusion website for a complete price list.

What’s the schedule for Fan Fusion's celebrity Q&A’s? Practically every celebrity guest at the event will entertain the masses during Q&A sessions held throughout the weekend. It's one of the most popular attractions at Phoenix Fan Fusion and tend to attract big crowds.

Here’s a rundown of when and where the biggest guests at Fan Fusion will conduct their particular panel:

Both halls will contain pretty much anything and everything a geek could want, including all manner of toys, games, clothing, jewelry, books, collectibles, and props. There will also be an extensive “Artists Alley,” with several dozen comic book creators, authors, illustrators, and others involved with the industry.

Playing games at Cobra Arcade Bar's booth.
Benjamin Leatherman
Will there be gaming? Of course, and, as always, there will be a ton of it at the event. The folks from the Game On Expo will have consoles and systems both retro and modern in multiple rooms with tournaments and competitions going on all four days.

And, just like last year, Cobra Arcade Bar will have a selection of classic games and pinball machines available for play at the event, including numerous ones inspired by comics.

How can I plan ahead? Rowan recommends patrons download the Phoenix Fan Fusion app to help manage your time. (It's available on both iPhone and Android).  "There's a scheduling feature that will remind you where you're supposed to be and when so you don't miss anything,” she says. “There's much more to see and do that you can possibly do in four days.”

What should I bring to Fan Fusion? Both credit cards and cash (in case some vendors can’t take plastic), bottled water, a fully charged cellphone, a digital camera, comfortable footwear (since you'll be doing a lot of walking), some snacks, and a bag or backpack for carrying everything. Prop weaponry is cool, but, like we said, it will have to be inspected and possibly bound by security.

What shouldn’t I bring? Bona fide weapons, drugs or any intoxicants, a bad or disruptive attitude, impatience, Infinity stones, giant mechs, laser pointers, non-service animals, xenomorphs, or anything else forbidden by event organizers or the Phoenix Police Department.
KEEP PHOENIX NEW TIMES FREE... Since we started Phoenix New Times, it has been defined as the free, independent voice of Phoenix, and we'd like to keep it that way. With local media under siege, it's more important than ever for us to rally support behind funding our local journalism. You can help by participating in our "I Support" program, allowing us to keep offering readers access to our incisive coverage of local news, food and culture with no paywalls.
Make a one-time donation today for as little as $1.