Six Things to Do This Week in Metro Phoenix 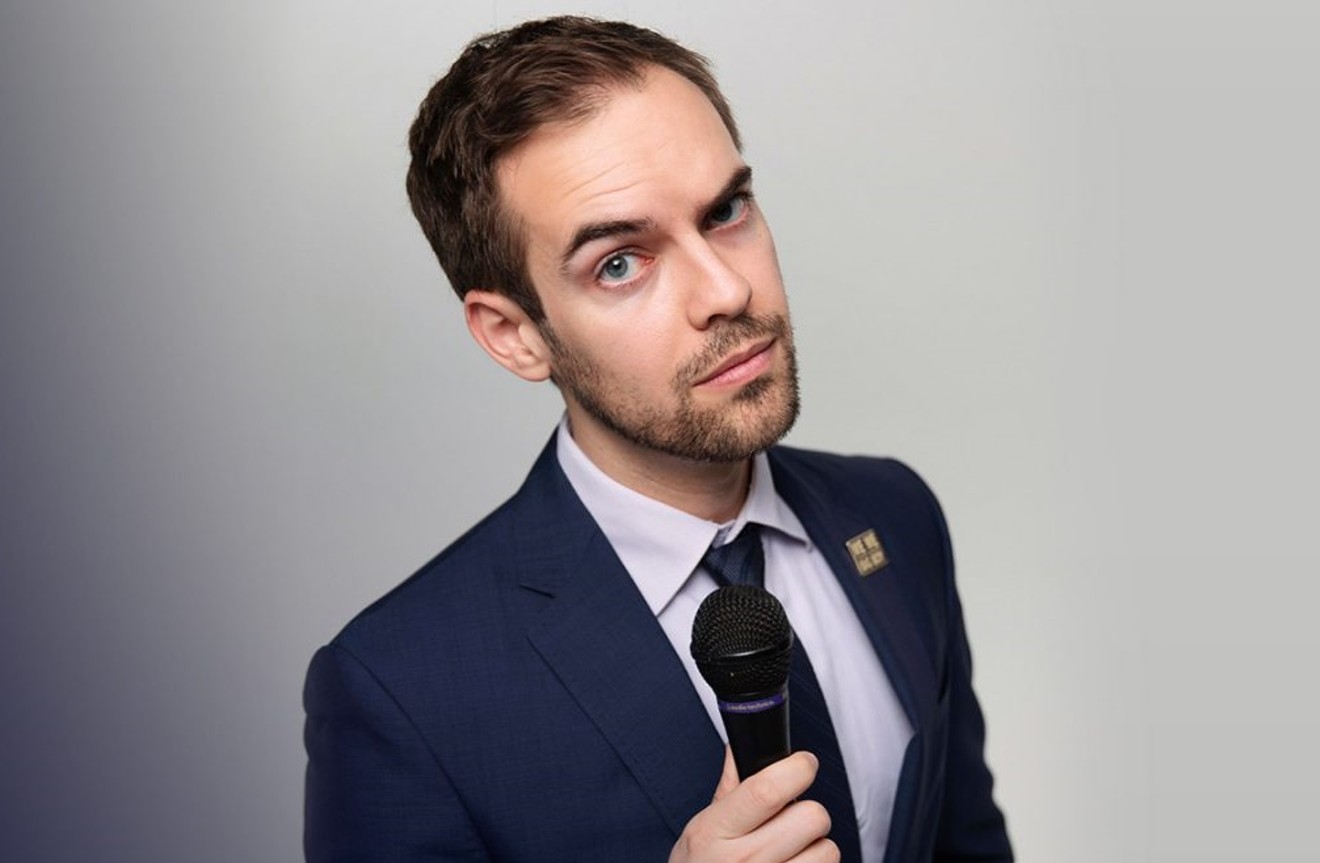 Jack Douglass (a.k.a. jacksfilms) is scheduled to visit The Van Buren on Monday, August 1. Ticketweb
After several refreshing days of cooler temps and monsoon storms, the weather will be back in blast furnace mode this week. That said, it’s no excuse to not go outside. Instead, go see YouTube star Jacksfilms, an underappreciated sci-fi horror flick, or a midweek session by local singer-songwriters. You can also kick up your heels at this year’s Arizona Dance Classic or view the latest works by a talented lineup of Arizona artists.

Read on for more details and info on other events around the Valley from Monday, August 1, to Thursday, August 4, or check out Phoenix New Times’ calendar.

YouTuber Jack Douglass (a.k.a. Jacksfilms) is nothing if not prolific. Since 2006, he’s launched multiple comedy series on the video-streaming platform, including Your Grammar Sucks, JackAsk, and Yesterday I Asked You. He’s also created Twitch shows like Are You Funnier Than A YouTuber?, co-hosts the podcast Erin Is the Funny One, and has a new party game coming out called Be Funny Now! Members of the Jacksfilms fanbase who’d like to see him do his shtick live and in person (as opposed to watching it on a glowing screen) can head for The Van Buren, 401 West Van Buren Street, on Monday, August 1. Douglass is bringing his tour to town and it promises to be like a live version of one of his YouTube shows, though you won’t need an Internet connection to enjoy it. Doors are at 6 p.m. and tickets are $30. Benjamin Leatherman

Science fiction cinema is littered with underappreciated films that were overlooked in their day but have become more beloved in the years since. Case in point: 1997’s Event Horizon, the sci-fi horror flick starring Laurence Fishburne and Sam Neill. Ignored by audiences and dismissed by critics (a reviewer from this very publication called it a “harsh, gory space opera”), the tale of an interstellar rescue team exploring a missing ship possessed by a malevolent force has earned cult status over the past couple of decades. Event Horizon is turning 25 years old this month and the Majestic Neighborhood Cinema Grill, 1140 East Baseline Road, will screen the film at 8 p.m. on Tuesday, August 2. Tickets are $10 per person. Benjamin Leatherman

This free weekly songwriter showcase might be the best networking opportunity in the Valley for local up-and-coming musicians. Each week, "Wednesday Wednesday" features six to eight artists performing 15 minutes of stripped-down songs each on the second-floor balcony of the Crescent Ballroom, 308 North Second Avenue. The whole series is curated, created, and emceed by Jesse Teer of The Senators, who said he first had the idea to start the event because of a similar showcase at Los Angeles’ Hotel Cafe called "Monday Monday." The lineup for this week’s edition on Wednesday, August 3, will include Conor Lafferty, Caitlin McGlade, Jared Michael Anthony, and Gianna Almond Eye. The music starts at 8 p.m. Gannon Hanevold

Maybe your mind is a vault and it’s full of facts that seem invaluable. While your mental tidbits collection might not contain life-saving information, it still could win you cash and prizes. At Geeks Who Drink, a pub trivia event styled after versions in Ireland and the UK, teams compete in groups of six or fewer. The quizzes cover subject matter from celebrities and bad television to sports and science. There are seven rounds of eight questions each in various formats, including both audio and video rounds. The competition is peppered with opportunities to win a variety of prizes. Show what you know from 7 to 10 p.m. on Tuesday, August 2, at 12 West Brewing, 12 West Main Street in Mesa. It's free to participate. Click here for more info. Amy Young

If it’s been a while since you popped over to Old Town Scottsdale for a visit, head over between 6 and 9 p.m. on Thursday, August 4, to explore the local arts scene. Royse Contemporary, 7077 East Main Street, Scottsdale, is presenting its annual “Summer Spectacular” group exhibition featuring works by more than a dozen artists based in metro Phoenix — including James Angel, Charmagne Vasquez, Cam DeCaussin, Gennaro Garcia, Cherie Buck-Hutchison, Peter Brian Klein, Monica Aissa Martinez, and Marilyn Szabo. Collectively, their work provides a fun glimpse into the local contemporary arts landscape. Admission is free. Lynn Trimble

Put on your red shoes, or actually some broken-in shoes, for this year’s Arizona Dance Classic. The annual event kicks off on Thursday, August 4, and four days of dance are scheduled at the Hilton Phoenix Tapatio Cliffs Resort, 11111 North Seventh Street, and will feature competitions, workshops, social dancing, spectating, and a Saturday night dinner and variety show. Other activities include American and international-style ballroom competitions, the Arizona Two-Step State Championship, United Country Western Dance Council-sanctioned country dance competitions, and West Coast Swing Jack & Jills – members of the World Swing Dance Council – square-offs. Prices for tickets and access passes vary and are available here. A full schedule is also available on the Arizona Dance Classic website. Lauren Cusimano
KEEP PHOENIX NEW TIMES FREE... Since we started Phoenix New Times, it has been defined as the free, independent voice of Phoenix, and we'd like to keep it that way. With local media under siege, it's more important than ever for us to rally support behind funding our local journalism. You can help by participating in our "I Support" program, allowing us to keep offering readers access to our incisive coverage of local news, food and culture with no paywalls.
Make a one-time donation today for as little as $1.