The Scott Has Replaced Kimpton's Firesky Resort in Scottsdale The lobby will go through a revamp to bring on the feel of a front porch in Havana. Courtesy of The Scott Resort & Spa
Say goodbye to Firesky Resort & Spa in Scottsdale. The historic Scottsdale property has a new name: the Scott.

And it's in the process of getting a new look.

Changes are already underway for the hotel, which will remain open during renovations.

"The Scott is a modern incarnation of an Arizona classic with a fresh, design-forward concept that will attract both locals and visitors alike,” says Classic Hotels & Resorts president John Grossman in a press release.

Classic Hotels & Resorts has announced plans to invest $15 million in the Old Town Scottsdale resort, renovating all guest rooms, suites, 14,000 square feet of meeting space, two pools, a restaurant, and a lobby bar with a Spanish Revival meets Bauhaus-inspired modern design concept. Redesign efforts are set to begin in May 2017 for all common areas (including the lobby, restaurant, and meeting spaces), and they're expected to be complete in September 2017. The 204 guest rooms will undergo renovations in 2018. 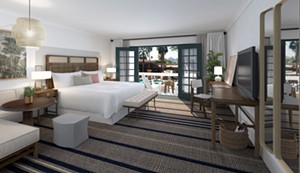 The 204 guest room will soon include private outdoor patios and balconies and redesigned bathrooms.
Courtesy of The Scott Resort & Spa
The first phase of the revamp will transform the lobby area to resemble a traditional front porch in Havana, incorporating screens, rattan settees, and indoor landscaping.

The indoor/outdoor lobby bar and restaurant will feature a large tree as the centerpiece, surrounded by native plants, new furnishings, and a fireplace. Once renovations are complete, the Scott will host programs like specialty cocktails and food at the lobby bar and the resort’s two lagoon pools – which will feature more cabanas and a sandy beach area. Meeting and function spaces will be updated with new Axminster carpeting, light fixtures, and more features.

In phase two, the guest rooms will be renovated to include private outdoor patios and balconies, as well as redesigned bathrooms. A Presidential Suite and four one-bedroom suites will also be added to the property. Though the hotel is open during reformation, specific room rates have yet to be confirmed once renovations are complete.

Companies like the New York and San Francisco-based AvroKO, Hart Howerton, and Rinker Design helped rebrand and redesign the resort, as well as the local architect firm Synectic Design based out of Tempe.

For more information or to make a reservation at the Scott Resort & Spa, call 800-528-7867 or visit The Scott's website.