There are a lot of sports bars on this side of town, but comfy, approachable Irish pubs? Not so much. Which is exactly why we were so happy to stumble upon Irish Wolfhound Pub in Surprise. The restaurant and bar looks like nothing special from the outside, sure, but walk in and you'll find a modern pub with pool tables, plenty of televisions, and a roomy patio with a fire pit to boot. During our happy hour experience — the pub offers dining and drinking deals everyday from 11 a.m. to 7 p.m. — we bellied up to the spacious bar and ordered a $2.50 domestic draft. The taps here boast a selection of the usual stuff as well as some awesome local and craft brews, including San Tan Brewery beers and Montana's Big Sky Brewing's IPA. Well drinks and house wines will only set you back $3.50 and the happy hour menu includes $5 chips with curry or ranch sauce, chicken wings, and Irish cocktail sausages. 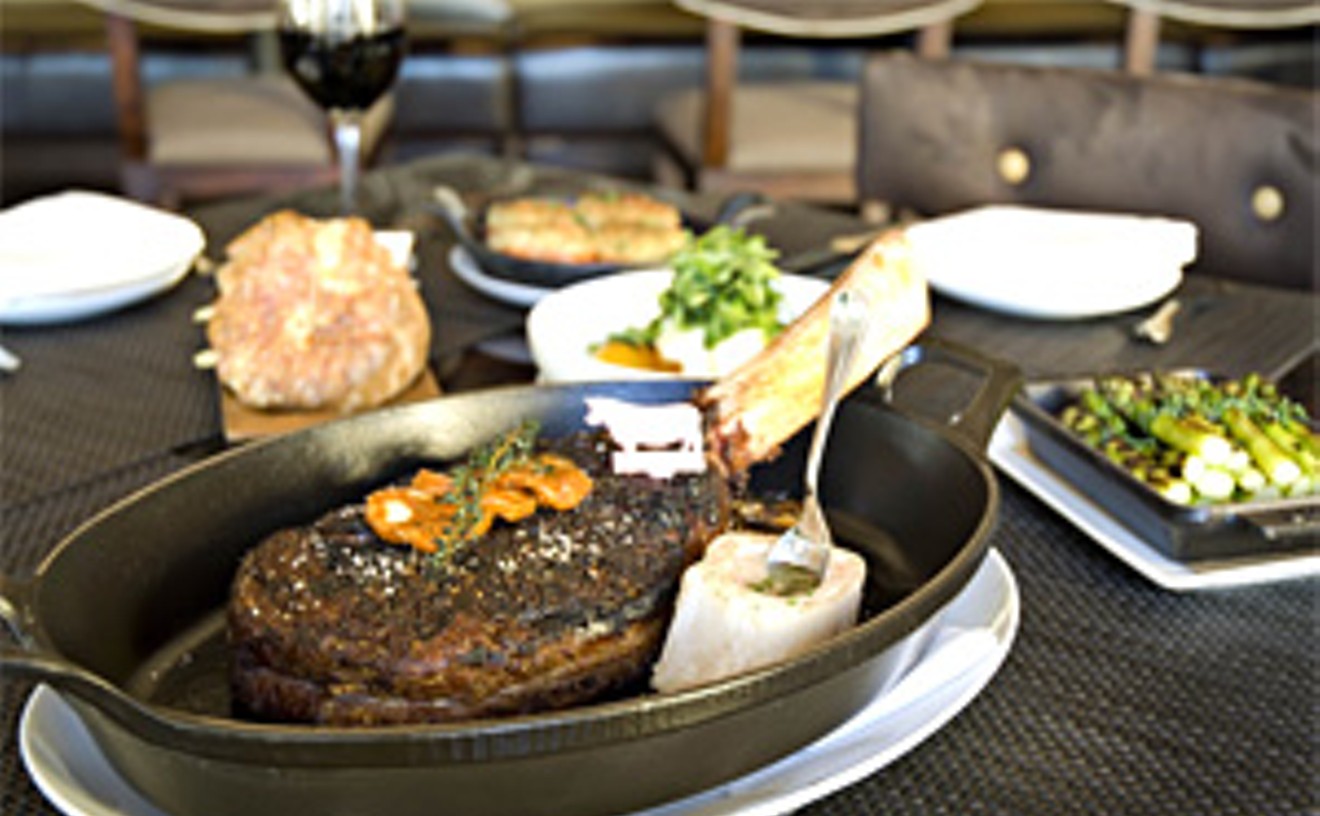 BLT Steak's happy hour just might be the best of the best. Every day from 5 to 7 p.m. the Paradise Valley restaurant slings some of the classiest cocktail and appetizer options known to the deal-obsessed. Make sure to come early because seats fill up quick. While that's a good sign, you wouldn't want to waste a moment of the steak tartare, escargot, and hamachi-filled awesomeness that is happy hour at BLT. There also are $5 draft pints and $3 well cocktails, but the specialty drink menu is the kind of place you can lose yourself for an evening of delicious imbibing. Tequila brambles, mango Moscow mules, and fig-infused old-fashioneds all put a new spin on classic drinks in the tastiest way possible. There pretty much isn't one single thing you could order that wouldn't be a satisfying and delicious culinary adventure — plus the prices allow for you to sample almost everything, especially if you bring friends. 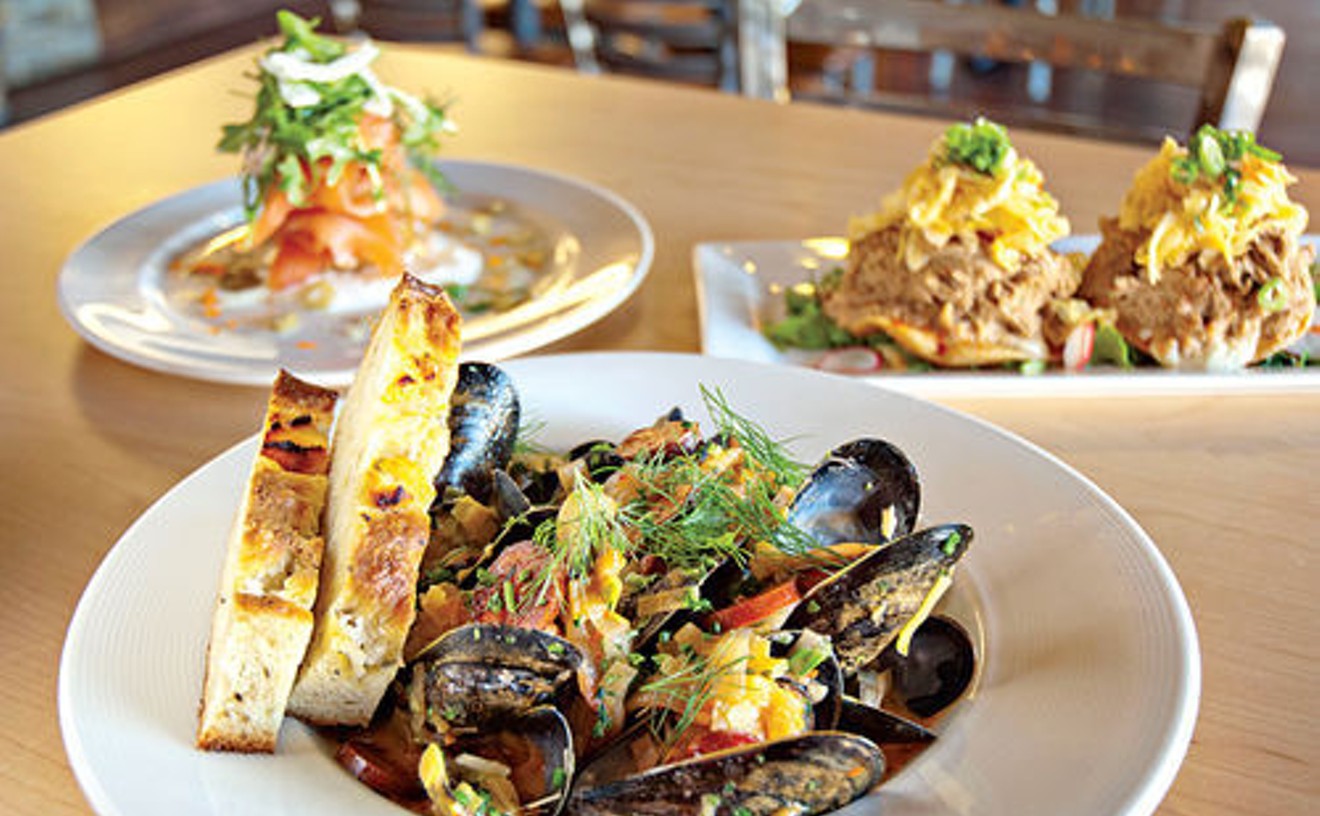 Oh, Pig & Pickle. How quickly it's found a permanent place in our hearts for its savory and briny, sweet and salty combos that often feature its namesakes. Its greatness is really only enhanced during happy hour, when you can try out what all the fuss is about without shelling out too much money. The pork-centric menu features overloaded pork shoulder and kimchi tostadas and a charcuterie board that is both piggy and pickle-y no matter what day you drop in. The $5 cocktails are simple classics done right, like a gin ricky or mint julep made with fresh ingredients and better-than-the-average well spirits. If you aren't drooling yet, get a plate of the $5 beer cheese nachos and you'll quickly change your tune. All of that happiness can be had off Thomas and Hayden roads in Scottsdale every day from 4 until 6 p.m.

Some happy hours are about the ambiance, some the drink, some the deals. House of Tricks is one of those happy hours you drop into time and time again to get fed right. The seasonal menu is always evolving, but after years of tasting House of Tricks offerings, it's assured that, regardless of what's on the new menu, it's going to be full of unique, complex, and explosive flavor combinations that will have you begging for more. As far as drinks go, from 4 until 6 p.m. on Monday through Saturday, you'll get $2 off glasses of wine from the exceptional selection, along with $1 off beer. You should also take advantage of the $1 off cocktails because they include the tasty craft, specialty concoctions on the ever-changing drink menu. While this isn't the cheapest happy hour in town, it certainly is one of the tastiest — and a great option if you're craving House of Tricks quality but you don't have the funds to shell out for a full House of Tricks meal.

Chandler has officially arrived on the culinary scene thanks to Barrelhouse American Kitchen & Cocktails. Located in an unassuming strip mall storefront off Alma School and Warner roads, the modest yet modern spot quickly gained attention with great food and unique drinks. You can take advantage of both options during happy hour Monday through Saturday from 4 until 6:30 p.m. Mouthwatering roasted chile shrimp with pasilla, fried artichoke bruschetta, and maple-smoked pork belly with crostini await you. Plus, the Harris Ranch chuck burger with fries is drive-thru priced, yet four-star quality. Most impressively, the craft cocktail menu, which reads like a novel you just can't put down, also offers $3 off regular pricing. Whether you go with a "sweet and sultry," "bright and crisp," "stirred and strong," or "bitter and herbal" cocktail, you can't wrong. The grind of late-afternoon traffic in downtown Phoenix ain't so bad, particularly if you're like us and are watching it from three stories above. And perched alongside a gorgeous swimming pool with an elegant crafted cocktail in our hand. It's the sort of lofty situation that's available while checking out the happy hour scene up at the Lustre Rooftop Garden every Monday through Friday. We're pretty high on this chichi outdoor lounge next to the third-floor pool at the Hotel Palomar, which delivers sweeping views of downtown and South Mountain, as well as sweet deals on food and libations that can be had from 11 a.m. to 6 p.m. During those hours, a trio of handcrafted signature cocktails, like the potent Tommy's Margarita and lusciously fruity Camellia Cooler, each go for $6 apiece. Ditto for glasses of Gazerra pinot grigio, Klinker Brick zinfandel, and red or white sangria, as well as pints of Lumberyard IPA. Lustre also shines with its always-enticing flatbreads, three of which (including a savory-yet-sweet pork belly, candied jalapeños, aged cheddar creation, and another selection with heirloom tomato and house-pulled mozzarella) — are also $6. Grab one and head for one of the cabanas near the pool, chill out to the indie and retro pop soundtrack, and relax while living the high life.

Since 2007, the Lost Leaf has been the epicenter of downtown Phoenix's growth as a nightlife destination. For all intents and purposes, the rehabbed 1930s bungalow, with its gorgeous wood floors and exposed brick, is the unofficial hangout for downtown artists and musicians of a certain boho aesthetic. It's a good bet that if you run with either crowd, you'll see a familiar face just about any time you set foot in the place — even when it's not First Friday or Third Friday, when the Leaf is filled to near-capacity. The pristine selection of microbrews, import beers, and wine helps make the Lost Leaf the quintessential downtown gathering place, as does the rotating collection of local art on the walls and DJs who spin probably the most eclectic mix in town — that is, when downtown's post-punk and underground bands aren't performing in the cozy back alcove. As downtown's creative class continues to grow, The Lost Leaf continues to be the place to see and be seen.

It's like clockwork. Around 9 p.m. on any given Friday or Saturday, Scottsdale's vast population (221,000 and change, last we checked) starts swelling by several thousand as the 21-to-35 crowd begins its weekly invasion of the city's downtown entertainment district. Stake out a spot on the outdoor patio at The Firehouse, conveniently located along one of the main drags into the bar-heavy 'hood, and witness this teeming World War Z-style horde of drink-buying, thrill-seeking nightcrawlers marching by the place. It's a nonstop cavalcade of capricious behavior, starring well-coifed club kittens teetering over to Red Revolver in stilettos, inked-up muscleheads ready to rock at Martini Ranch, or the shutter-shade brigade bound to some EDM fest at either Maya or El Hefe. And things get even more entertaining as the evening wears on and the booze wears off, especially inside the chaotic and energetic milieu of The Firehouse. Patrons go wild up until 4 a.m. at the after-hours hotspot, and you're guaranteed to see at least one instance of a sparring dummy being accosted by drunken bros, mock swordplay using baton-like glowsticks, or maybe even the odd food fight. Sure beats gawking at one of those sidewalk fistfights that tend to break out after last call.

ROAR's 2010 EP, I Can't Handle Change, is perfectly self-contained not just as music but as music-writing; it's frustratingly hard to avoid cliché autopilot when talking about it. It sounds like nothing so much as an earnest reimagining of Phil Spector's hermetic maximalism, and — voilà — Phil Spector is on the cover. The careful melodies and harmonies gradually draw your attention, until — just in time — a barbershop quartet materializes for the a cappella "Baby-bride Rag." It feels labored over in a way that generates comparisons to Brian Wilson at his anxious, unpleasable best, and — of course — the title track reaches its climax in a rousing chorus of "Nothing I do is ever good enough!" Add in 2012's follow-up EP, I'm Not Here to Make Friends, and it's a little easier to say original things, if only because fewer people have heard it — recent live performances have pointed up their spirit-animal connection to Ronnie Spector with dresses and long wigs. The full-length album, which everyone will hear, is a work in progress. A few times a week, lately, on ROAR's Tumblr, a fan will ask about it, and frontman/lead-Spector Owen Evans will apologize for the delays. We haven't heard the material; if we had to guess, it's almost certainly good enough already. But we'll wait.

The members of Cowboys N Hell are modest, above all things: When we asked them who the best tribute band in town was, earlier this year, they suggested the White Zombie aficionados in Grindhouse, on the grounds that they "get every titty in the house shaking, every time they play." We didn't do the titty math for Cowboys N Hell, but the logic is pretty simple: Phoenix loves metal, Dimebag Darrell isn't around to play these Pantera songs anymore, and the members of Cowboys N Hell are. Like Beatlemania, they aren't competing with the genuine article — they're giving people who won't have a chance to see the real thing access to a suitably raucous facsimile, one that re-creates an atmosphere instead of just reverse-engineering the relevant studio recordings.