As plants get taller they get a little help standing up straight. Jacob Tyler Dunn
Harvest Health & Recreation, Inc., by far the biggest dispensary operator in Arizona, just got bigger.

The Tempe-based company announced on Wednesday it has acquired Arizona Natural Selections, a private company with four dispensary licenses and three open retail locations in Peoria, Scottsdale, and Mesa. The acquisition took place for a "nonmaterial undisclosed amount of stock," according to the press release.

The deal includes the existing three retail locations under the brand name Arizona Natural Selections, as well as a fourth to be opened. It gives Harvest two new cultivation facilities, in Phoenix and Willcox, bringing the company's total number to five. It also includes a line of cannabis products under the brand name Darwin.

With this acquisition, and pending acquisitions, Harvest has control of 22 of 130 existing medical marijuana dispensary licenses in the state — about a sixth of the total. It's also one of the largest dispensary operators nationwide, with rights to operate 210 facilities across the country, the company said in the release.

"We are excited to further deepen our operations in our home state of Arizona," Harvest CEO Steve White said in a statement. "We will look to further the existing reputation and operational excellence Arizona Natural Selections has established across the state." 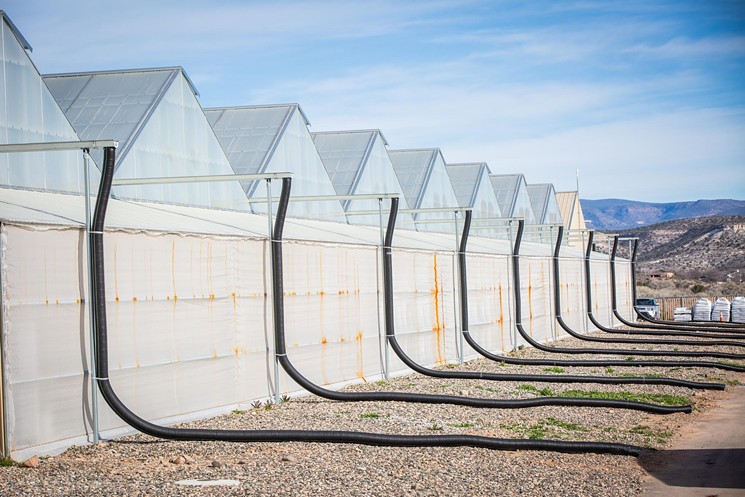 The exterior of the Harvest Facility in Camp Verde, Arizona.
Jacob Tyler Dunn
Harvest and other public, multi-state operators in the cannabis industry have struggled in recent years as they've spread their footprints across the United States with pricey acquisitions but haven't yet seen a return on their investments. Harvest's stock price has fallen significantly in the last year, and White recently told Phoenix New Times the company didn't make a profit in 2019.

But a likely ballot initiative to legalize adult-use marijuana in Arizona this November, which Harvest has spent hundreds of thousands of dollars to help fund, and which White helped write as a former president of the Arizona Dispensaries Association, could change all that.

The measure, called the Smart and Safe Arizona Act, would give first priority to open adult-use dispensaries to people who currently hold medical marijuana licenses in Arizona. For Harvest, that means its 22 dispensary licenses would effectively become 22 additional adult-use licenses overnight.

The prospect of such returns means deals for control of dispensary licenses often come at hefty prices. Industry experts have told New Times such deals typically amount to $8 or $10 million. There have been tales of deals for as much as $20 million.

Harvest's latest transaction, which appears to have taken place entirely in stock, gives the seller a stake in a company that faces a great deal of risk, but also a potential huge reward if Arizona legalizes adult-use marijuana and if one day the federal government lifts restrictions on cannabis businesses.

J.P. Holyoak, founder of Arizona Natural Selections, declined to comment on the deal, saying it was "a private, personal, confidential matter."
KEEP PHOENIX NEW TIMES FREE... Since we started Phoenix New Times, it has been defined as the free, independent voice of Phoenix, and we'd like to keep it that way. With local media under siege, it's more important than ever for us to rally support behind funding our local journalism. You can help by participating in our "I Support" program, allowing us to keep offering readers access to our incisive coverage of local news, food and culture with no paywalls.
Make a one-time donation today for as little as $1.
Ali Swenson was an editorial fellow for Phoenix New Times starting in 2019.