El West are putting out new music this weekend. Luxicon Photography
Based on the amount of new music being released lately, spring is definitely on its way. There is so much to share this week.

Last week, Turn Zero released their second single, “Petty,” on all streaming platforms. This emo-pop ballad is a duet from the band leader Emily Grieve and Nick Barker, the lead singer from Love Like Fiction.

The track is about the slow demise of a relationship between two unfaithful lovers who become dramatically different to each other. You can also catch them Friday night at Club Red, 1306 West University Drive in Mesa, opening for Awake at Midnight.


If you’re looking for something more punk, Promise to Myself released this week I Might Be Crazy, their fun, danceable second EP. It’s nice to hear the growth of this band, who formed while they were still in high school. Their creative energy can be described as what would happen if Fall Out Boy, All Time Low, and Waterparks fought to the death in a game of dodgeball, and the winner ended up being Big Time Rush. 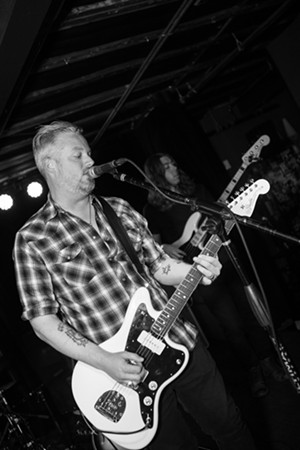 Parlor Birds have new music coming out this week.
Jim Louvau
There are a couple of release parties this weekend, so if you’re looking to see some live music, you have some great options. The melody-driven alt-rock band El West are releasing their third EP Illume on Friday night at The Rebel Lounge, 2303 East Indian School Road. It’s going to be quite a dance party with support from Harper and the Moths, Paper Foxes, and Sleepwar. This is not a show you want to miss. El West will have free CDs of the six-track EP on-site, but the music will not be available in any other format for several weeks.

Blues duo Parlor Birds are releasing their new album, Strange Vibrations, at Rockbar, located at 4245 North Craftsman Court in Scottsdale, on Saturday night. It’s another dance party in the making, with support from Animatronic and The Runner Up. If you're a local beer fan, there will be a few selections from Huss Brewing on tap that night.
KEEP PHOENIX NEW TIMES FREE... Since we started Phoenix New Times, it has been defined as the free, independent voice of Phoenix, and we'd like to keep it that way. With local media under siege, it's more important than ever for us to rally support behind funding our local journalism. You can help by participating in our "I Support" program, allowing us to keep offering readers access to our incisive coverage of local news, food and culture with no paywalls.
Make a one-time donation today for as little as $1.

Dani Cutler is the morning show host on independent radio station KWSS 93.9 FM, which supports local independent artists as part of its regular alternative music rotation. She has been volunteering for the station since 2007. You'll often find her out at a show or walking around with her headphones on because she forgot she was wearing them.