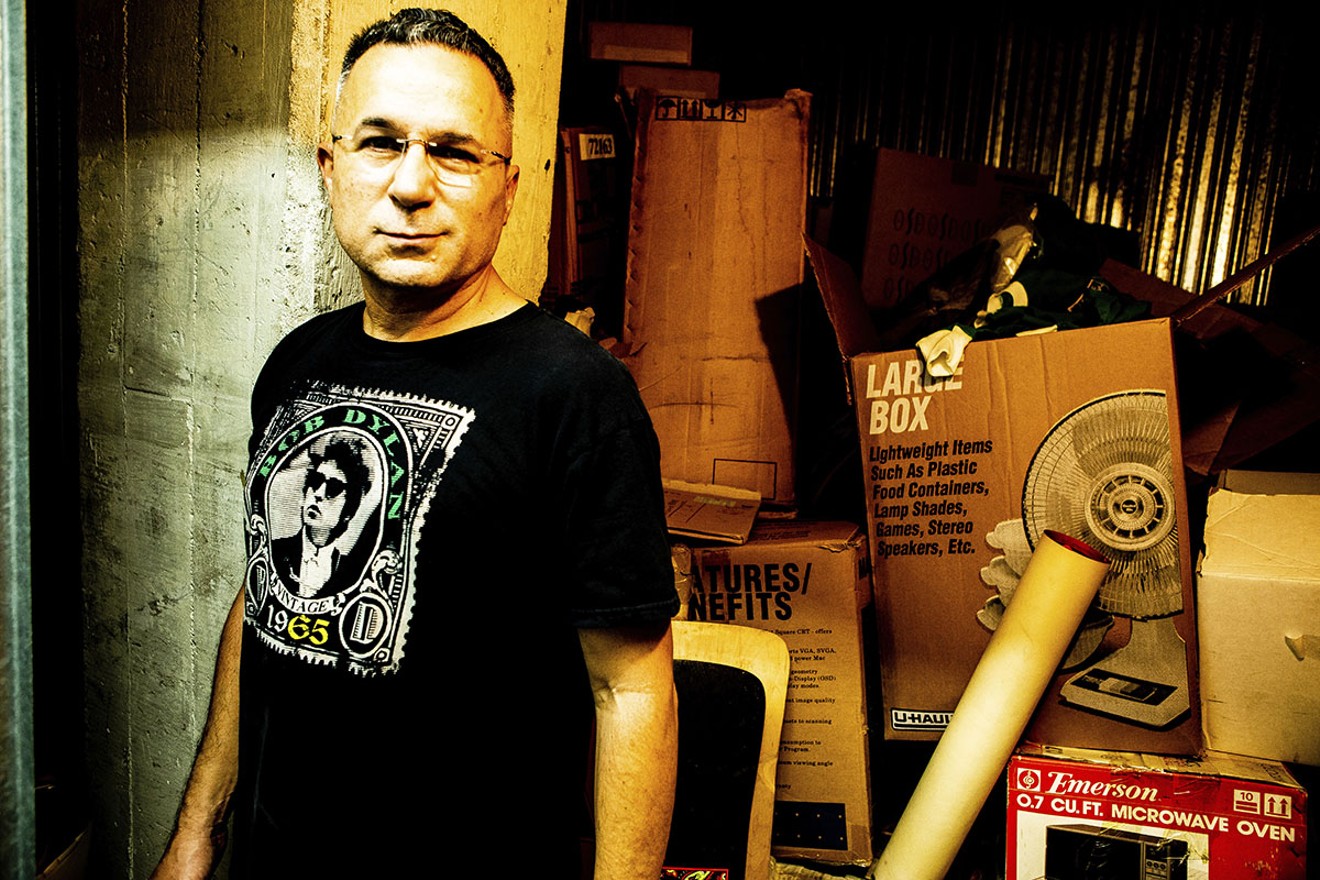 Placebo Records co-founder Tony “Tony Victor” Beram at the Phoenix locker where he stored the label’s memorabilia. Jim Louvau
A short but brilliant career is a singularly punk rock expression. Why else would Rancid begin the second verse of "Journey to the End of the East Bay," about the seminal Operation Ivy, with "Started in '87 / Ended in '89."

Phoenix’s own '80s punk scene was marked by similar here-and-gone clubs, artists, and other artifacts, chief among them Placebo Records. Running from 1981 to circa 1990, the label of Tony "Tony Victor" Beram existed at the scene's epicenter, promoting shows at Mad Gardens, releasing music by the likes of JFA and Sun City Girls, and shaping Phoenix's diverse, dynamic music scene over the last 40 years.

"All that stuff that was coming online, that wouldn't have happened without Placebo," says JFA's Michael Cornelius. "Sun City Girls and JFA and Mighty Sphincter wouldn’t have springboarded into more broad, international attention."

Then what better way to commemorate Placebo’s place in local history than with its own "museum " of sorts? The planned Club Placebo represents a year-plus of work from Beram, Cornelius, and other artists, fans, and historians to preserve the label's history. With a building near downtown Phoenix, the proposed project promises to serve as a "gallery, performance/panel discussion [space], and living archive documenting all things Placebo Records and beyond."

Beram says most of the work on the building is done, and they could open sometime in March. A benefit show this weekend (January 8) will help Beram and company gain volunteers, promote the space, and drum up future funding. (They’ve also begun registering as a nonprofit, Beram says.)

Club Placebo's primary goal is to house Beram's insane archive, from flyers and old zines to band pics and pressings.

"We're taking the existing stuff out of storage and getting it sorted and protected," Beram says. "But at the same time, we're trying to collect more stuff that's out there that might also be in danger of not being preserved." Beram even tapped a former employee to live on-site to help "safeguard" the archive.

However, the club exists as a very specific educational and entertainment option.

"We'll have a live panel discussion with some artists that worked with Placebo Records or [Beram's] Mersey Productions," he says. "Then once the panel discussions are over, you clear out some of the lights and let those participants do a performance. So you have a way of documenting the past but still doing something that's in the present."

Doug Clark of Mighty Sphincter plays guitar at Mad Gardens in Phoenix in the early 1980s. A young Michael Cornelius is taking pictures in the background.
Joseph Cultice
Beram says he never returned to Placebo because he didn't want to "flog the horse or that kind of thing," and has even avoided anniversary reissues as the label recently turned 40. But Beram's done plenty of reminiscing in recent years, spurred on by recent tragedies.

"The guitarist from Mighty Sphincter, Doug Clark, passed away, either right after the shutdown or a few weeks later," he says. "And he was the same age as me. If you look at the first comp we did, it's kind of an inordinate amount of people to have passed away at such a young age. When things are actually happening, you appreciate it less when you're in the middle of it."

He also has a complicated idea of Placebo’s legacy, adding that he shuttered the label in part because "there was always a lot of negativity thrown my way," adding, "when you're working that hard, and you're not making money, eventually it all takes its toll on you."

Working on Club Placebo, then, has further helped Beram in coming to terms with Placebo's past.

"Over the last 10 years or so, people have come up to me with massive praise and love," Beram says. "So I think it took some time for it to evolve into a place where I could feel good about even thinking about stepping back into any of it."

Good feelings aside, there have been some challenges. For instance, Beram's mostly been alone in preserving a lot of this stuff given the carefree approach of the '80s scene.

"In the JFA days, we thought about the next few weeks," Cornelius says. "We thought something would happen and it would all be over and all the clubs would close and the cops would start showing up."

Cornelius adds, "We used to play the Salty Dog. It was just a closed bar that we could get in and that still had power. That wasn't the kind of thing you thought was going to last, right?"

Given the scene's innate volatility, Beram says his work isn't just archival but to further facilitate things for the artists involved.

"It was a very beautiful convergence of these weird little art scenes," Beram says of Phoenix in the ‘80s. "You had something in Mesa, and a group way over in Maryvale and another in downtown, and none of them really knew each other. When Placebo and Mad Gardens opened up, it gave all these people a kind of a central clearing house to do their things, and everybody met each other."

But it’s not just about protecting and promoting the past, either. There's the future to consider.

"I think that one of the goals of it, really, is to remind people of what happened then and how it can relate to now," Cornelius says. "Not just to save that history, but so people can view it and relate to it and get involved with it. If people are inspired by it, we could help them document what they're doing."
Cornelius adds that making history, and overcoming certain obstacles, has always been an integral element of Placebo’s operations.

"There were clubs that said, ‘No, we're just going to have a country band and play some covers,’" he says. "Then punk rock bands started breaking that barrier...and a few clubs started to put in a good sound system. I mean, that was a big deal."

It's an ethos that grew within other subsequent local scenes.

"I played at Long Wong's with bands like Gin Blossoms and Dead Hot Workshop [in the early '90s]," Cornelius says. "I saw the changeover in that era. A lot of those people had experience going to punk rock shows in the '80s."

For his part, Beram is hoping to motivate and encourage a new generation of artists, fans, and cultural stakeholders.

"I've been told by other people that the [DIY] mindset is maybe getting lost somewhere in American society these days," he says. "So if [the club] can inspire people to go ahead and do something yourself, that's certainly a large part of the success."

It’s also about giving a spotlight to some of the older artists, of course, with Beram adding that if "you catch an artist at 60, they're just in a much more talented, stable space."

So, does all this mean a resurrection of sorts for Placebo Records? Beram is mum on the details, but says they've had conversations about rereleases and new records.

"If there's a way to do it that adds something, then I'm open to it," he says. "When I decided to shut Placebo down and put it into storage, it left some projects that were kind of started but never got done. Those are kind of intriguing to me."

For his part, though, Cornelius is focused on something more direct, a tendency that speaks to the heart of Placebo, its legacy, and whatever future might lie ahead.

"It just feels really good to remember and play music, and to pay some tribute to the really good songs that came out of that era," he says.

The Club Placebo benefit show is slated for Saturday, January 8, at Crescent Ballroom, 308 North Second Avenue. The 21-and-over lineup begins at 4 p.m. and includes sets by The Father Figures, No Volcano, The Gnomes, Fat Gray Cat, and JJCnV. Tickets are $10 in advance and $12 at the door; get yours now via See Tickets.
KEEP PHOENIX NEW TIMES FREE... Since we started Phoenix New Times, it has been defined as the free, independent voice of Phoenix, and we'd like to keep it that way. With local media under siege, it's more important than ever for us to rally support behind funding our local journalism. You can help by participating in our "I Support" program, allowing us to keep offering readers access to our incisive coverage of local news, food and culture with no paywalls.
Make a one-time donation today for as little as $1.
Chris Coplan has been a professional writer since the 2010s, having started his professional career at Consequence of Sound. Since then, he's also been published with TIME, Complex, and other outlets. He lives in Central Phoenix with his fiancee, a dumb but lovable dog, and two bossy cats.
Contact: Chris Coplan
Follow:
Twitter: @CCoplan