Mesa Jazz and Blues Theater, a local nonprofit organization “created for the education and preservation of America’s music,” will begin putting on concerts by local and touring artists in October. Shows will take place at Connect Church, a 350-person capacity venue and house of worship at 5255 East Brown Road in Mesa.

Bill Travis, the theater’s founder, told Phoenix New Times recently the project aims to showcase blues, jazz, and R&B gigs in the East Valley, a part of town where there’s been a scarcity of shows featuring those genres.

“There's never been a [dedicated] jazz and blues theater over here,” Travis says. “If you're into jazz, you gotta go to The Nash [in downtown Phoenix] or the Westside Blues & Jazz club [in Glendale]. So I thought we'd give it a shot because it's kind of a void.

"There are a lot of people out here who like the jazz and blues, and it's just not being presented,” Travis adds. “Out here, mostly its tribute bands and country and ’70s rock.”

Mesa Jazz and Blues Theater, which is renting the space from Connect Church, will present concerts starting in early October on nights when services aren’t being offered. Travis says admission will be “reasonably priced” and cost between $24 to $39 per person, per show.

So far, the theater has booked a “who’s who” of Valley jazz and blues artists. Its grand opening celebration on Sunday, October 2, will be headlined by legendary Arizona bluesman Big Pete Pearson and iconic jazz vocalist Dennis Rowland. (Locals like The Rhythm Edition, Sandra Bassett, and the Beth Lederman Trio are also scheduled to perform.)

The following weekend, renowned jazz drummer Mike Clark will perform a three-night stint at the theater from Saturday, October 8, to Monday, October 10.

Travis says most concerts at the theater will be offered on Saturday nights, but they’ll eventually expand to Friday nights. So far, performances have been booked through February 2023 and feature such artists and acts as The Sugar Thieves, Nicole Pesce, Bluesman Mike Anderson, Jackie Lopez and Nuance, Carmella y Mas, and Pete Pancrazi.

“We've been getting a lot of good responses to [our lineup],” Travis says. "Right now, most of our acts are top local acts, but we're also planning to bring musicians in from out of town."

Mesa Jazz and Blues Theater is a culmination of Travis’ lifelong love of music. A native of Tennessee, the 88-year-old Valley resident started out taking guitar lessons as a kid. ("Country music was all that was there at that time," he says.) After moving to Detroit at age 12, he was exposed to swing and jazz music, and played the drums in his school marching band and in local groups.

"I've been playing since I was a teenager,” Travis says. “As I got older, I'd go to all the clubs that had jazz and blues, as at that time there was a lot of R&B music and it was in all the small theaters. I got to see all the artists that were coming through, like Nat King Cole and Sarah Vaughan. And all of these [musical influences] have stayed with me." 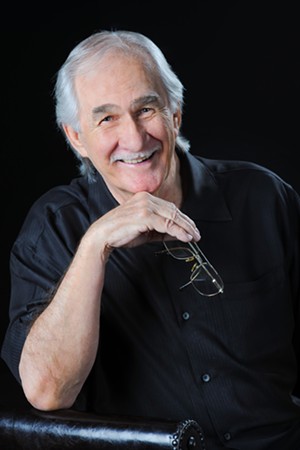 When Travis moved to the Valley more than a decade ago, he eschewed performing and instead got into promoting.

“It was going to take too long to get organized and find musicians to form a good band, so I gave it up and got into [putting on concerts],” he says.

After moving into the Dreamland Villa Retirement Community in Mesa, Travis began volunteering behind the scene at its performance venue, Farnsworth Hall, first working in the sound department and later getting involved with booking.

“The person doing the booking had a lot to do, so they asked me if I'd take it over,” he says. “I speak the language of musicians, so it was nice to get back to talking to bands and booking them.”

After a difference of opinion with the venue's management in terms of what types of genres to book, Travis decided to launch his own venue.

Travis says Connect Church reached out to him in 2021, as its sound man was familiar with what he was doing at Farnsworth Hall. The church inquired about the possibility of renting out the space to promote concerts there.

Then, the rise of the Omicron variant of COVID-19 in late 2021 put those plans on hold. Travis says he then decided to reorganize the Mesa Jazz and Blues Theater as a nonprofit. Earlier this month, it was granted 501(c)(3) status.

“My thinking was we could get support from donations, which is what you really need to make an operation like this successful," Travis says.

One thing that might complicate matters for Travis and the Mesa Jazz and Blues Theater, though, is the anti-LGBTQ stance of an organization linked with Connect Church.

Per its website, the Mesa church is affiliated with Transformation Ministries, a covenanting association of more than 200 churches across the United States “adhering to baptistic convictions.” (Connect Church is also listed on TM’s website as one of its member churches.)

The Transformation Ministries website contains “resources on how to respond to LGBT issues,” including a few booklets created by the Colorado-based fundamentalist Christian organization Focus on the Family that state homosexuality is a sin.

To wit: A 2017 booklet from the organization titled What Does the Bible Say About Homosexuality? Answering Revisionist Gay Theology states the following:

"Our goal in writing this booklet is not to bash people, but to speak clearly the truth of Scripture: sexual activity is reserved for marriage between a husband and wife; sexuality outside of those boundaries, including homosexuality, is a sin. Those who deny the sin of homosexual behavior are actually denying people God's forgiveness, grace and salvation."

The website for Connect Church does not state its stance towards LGBTQ individuals, though. (New Times was unable to reach a spokesperson for the church for comment.)

When asked about Transformation Ministries’ LGBTQ stance, Travis told New Times it was the first he’d heard of it.

“I really don't know anything about the church, I just know the people I work with there, and they’ve had no issue with LGBTQ [individuals],” he says.

He adds that he hasn’t seen any instances of anti-LGBTQ issues at the Connect Church.

“We’re renting the church for our concerts and they support us with volunteers,” he says. “The only restrictions they have put on us is just simply that we can't drink alcohol and can’t have profane language [during performances].”

Travis says he has "no issue whatsoever" with LGBTQ individuals or their backgrounds or beliefs, and that Mesa Jazz and Blues Theater shows will be "absolutely open” to everyone.

“If I saw someone being affected by it, then I would be concerned,” he says. “But, as I said, I haven’t seen anything.”
KEEP PHOENIX NEW TIMES FREE... Since we started Phoenix New Times, it has been defined as the free, independent voice of Phoenix, and we'd like to keep it that way. With local media under siege, it's more important than ever for us to rally support behind funding our local journalism. You can help by participating in our "I Support" program, allowing us to keep offering readers access to our incisive coverage of local news, food and culture with no paywalls.
Make a one-time donation today for as little as $1.