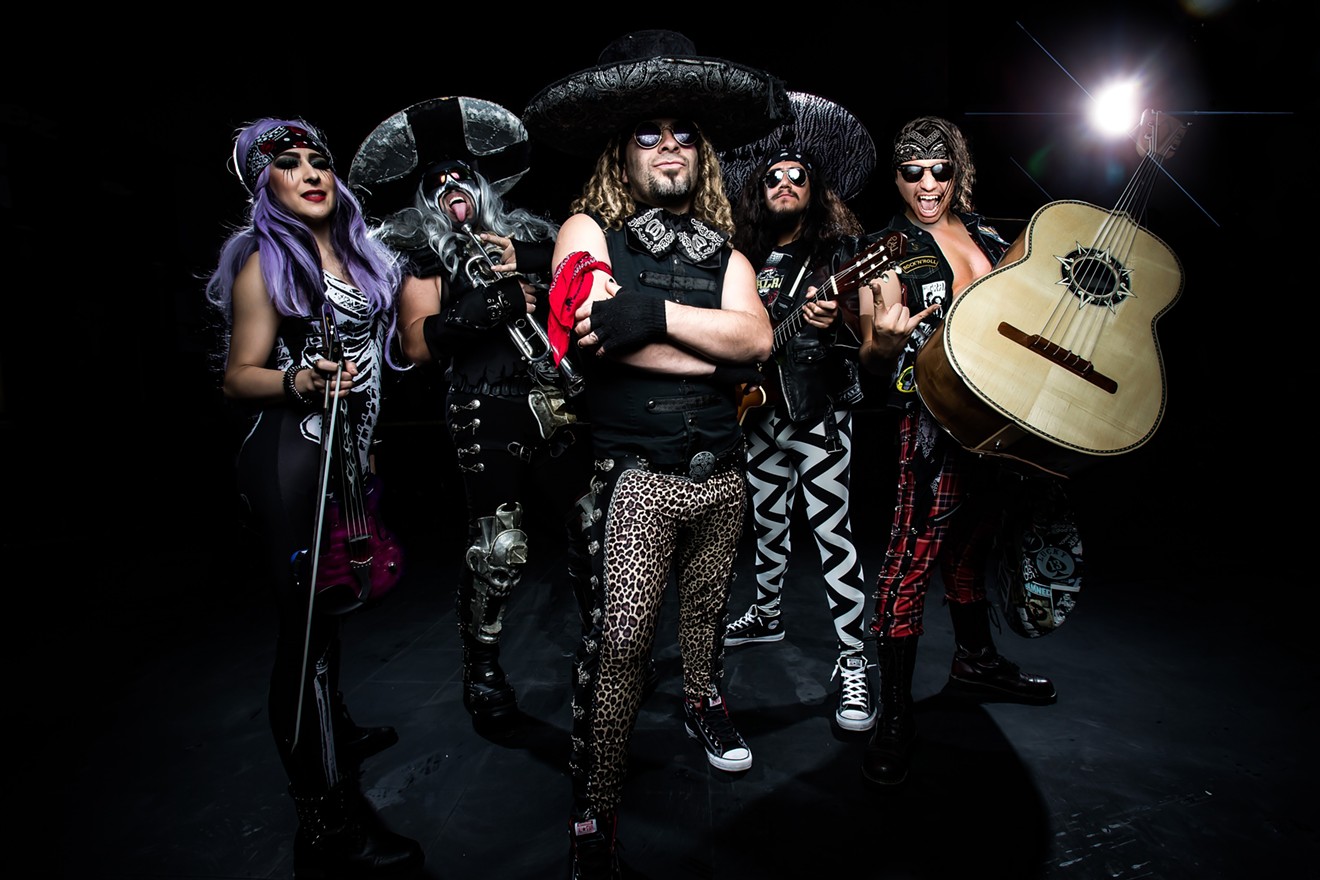 Metalachi will rock the Rhythm Room on Thursday. Jeremy Saffer
It’s no surprise that Metalachi are beloved by Billy Idol and Avenged Sevenfold’s M. Shadows.

Hailing from Los Angeles, the five band members started out as classically trained mariachi musicians. They're now the world’s first and only heavy metal mariachi band.

They combine the humor of Steel Panther, the flamboyancy of GWAR, and the eclectic rawness of Rob Zombie. There’s also a little dose of Spinal Tap and a hit of Cheech & Chong. The music is classic metal covers from artists like Metallica fused with classic mariachi by Vicente Fernandez and Mariachi Vargas de Tecalitlan. Their setlist is punctuated by comedic interludes and skits.


Metalachi, who include Vega De La Rockha, El Cucuy, "Queen" Kyla Vera, Paco Halen, and Kiko Cane, do an impressive job at hitting all the right notes. They certainly appeal to an Arizona audience. Last year, Tool’s Maynard James Keenan invited them to play at his vineyard’s employee Christmas party in Jerome. Comedian George Lopez asked them to perform at the grand opening of his Chingon Kitchen at the Vee Quiva Hotel earlier this year.

Phoenix New Times talked with lead singer De La Rockha before their show at the Rhythm Room on Thursday, November 21.

Phoenix New Times: How did you guys come up with the idea to fuse together metal and mariachi?

Vega De La Rockha: Well, we used to be mariachis before, and we had a show where we needed to combine those two. After we did that, we decided to try this full-on. And we became Metalachi. And tequila helps a lot, too.

What typically surprises people about mariachi when they come to see you?

To hear their favorite metal songs in a mariachi format. Usually, when we finish a show, they come up to us and say they could never hear the song again the same. So people who aren’t really metalheads or mariachi lovers— somehow they love the combination. Also, the element of comedy is incorporated between songs. Of course, it has to be funny. Laughter is the essence of life.

This is now one of the songs we have to play live now because everyone loves it.

Was that the most been the most challenging song as a whole so far?

Definitely! The vocals and arranging the choruses, since everyone sings from beginning to end. It’s fun to challenge yourself like that. You can hear bands do that song, and they might be able to copy it but not make it their own. And to have the special cameo by comedian/actor Felipe Esparza was amazing.

What are some other favorite songs you guys have taken on?

My personal favorite — since I’m a big Dio fan — would be “Holy Diver.” It’s so rhythmic. I really love it, especially when we see gringos dancing. Laughter. That one and Faith No More’s “Epic” would be another one; that’s on our second album. And “Give Me Some Chon Chon” also on Dos.

Why have you guys chosen not to use a drum set, a backbone of metal music?

The only time we had drums was with Dave Lombardo. We asked if he’d want to sit in on “Raining Blood.” He’s actually the only drummer that has ever sat down with Metalachi, and, at the last Megacruise, with Lamb of God drummer Chris Adler, he played “Ace of Spades” with us. In terms of not having drums, we’re keeping it traditional since mariachi doesn’t have drums. We’re a mariachi band that plays metal songs — not a metal band that plays mariachi.

You’re wrapping up the tour for the promotion of Tres. What’s next?

There’s going to be a lot more coming up after this new year, but it’s a surprise. We’re not working on an album right now.

Last year you mentioned you guys were working on a Vegas residency. Is that possibly the big surprise?

Metalachi are scheduled to perform on Thursday, November 21, at the Rhythm Room. Tickets are $20 via Eventbrite.
KEEP PHOENIX NEW TIMES FREE... Since we started Phoenix New Times, it has been defined as the free, independent voice of Phoenix, and we'd like to keep it that way. With local media under siege, it's more important than ever for us to rally support behind funding our local journalism. You can help by participating in our "I Support" program, allowing us to keep offering readers access to our incisive coverage of local news, food and culture with no paywalls.
Make a one-time donation today for as little as $1.