Kelsey Lu is scheduled to perform on Thursday, January 31, during FORM Labs Phoenix at the Phoenix Art Museum. Vincent Haycock
Up for seeing a show this week? If so, we’ve got a few suggestions to offer – 10 of 'em, in fact, all of which are worthy of your time and a modest amount of disposable income. It features such acts and artists as , Blackberry Smoke, Herb Alpert and Lani Hall, Lizz Wright, Kaveh Rastegar, and post-hardcore legends Thursday.

This week’s concert offerings also include Jake Owen kicking off this year’s Coors Light Birds Nest at the Waste Management Phoenix Open and the staging of FORM Labs Phoenix at PAM.

Details about each of these shows can be found below in our list of the best shows happening in the Valley this weekend. And for even more live music happening around the Valley, hit up Phoenix New Times' online concert calendar.

Two living legends, Herb Alpert and Lani Hall, will treat an audience to their unmatched talents and unforgettable music during one of the many concerts making up this year’s Arizona Musicfest. Alpert, of course, is the renowned trumpet player who spent the better part of the 1960s with the highly influential Tijuana Brass, creating such notable songs as “The Lonely Bull” and “Spanish Flea” while racking up six Grammy awards and more than a dozen gold records. He earned even more fame and acclaim in such genres as jazz, Latin, R&B, and funk after going solo in the ‘70s, including penning the 1979 hit “Rise” and collaborating with Janet Jackson and Lisa Keith on 1986’s “Diamonds.”

Hall, his wife of more than four decades, rose to stardom as the lead vocalist for Sergio Menes’ project Brasil ’66, sung the title track to the James Bond flick Never Say Never Again, and recorded a string of successful Latin pop records in the mid-1980s. Brittany Ackerman

Elvin Bishop hasn't always been about the blues, but he's always been around the blues. The renowned musician loved the blues early enough, in fact, that he went to college in the Chicago area just so he could be around them. "After a couple years, got squeezed out by the blues," he says.

In the 1960s, Bishop was one of the founding members of the Paul Butterfield Blues . He said he was lucky to be working with those great musicians because it set a high bar for the quality of music for the rest of his career. Bishop continues to be well-known in the blues world for his song "Blues Train."

While he has spent most of his career focusing on the blues, Bishop is best-known for the 1976 pop song "Fooled Around and in Love." That song made No. 3 on the U.S. Billboard Top 100 charts. This week, Bishop brings his current project, the Big Fun Trio, to the MIM for a Monday night performance. The show starts at 7 p.m. and admission is $53.50-$73.50. Stan Bindell

Thursday ignited the screamo scene of the early 2000s. But after taking an indefinite hiatus in 2011, they announced only two years later that they had disbanded. In 2016, however, Thursday decided to rekindle their post-hardcore legacy by playing the inaugural Sound on Sound Fest in Austin and booking a 24-city tour through the U.S. in 2017.

The band, known for singles such as "Understanding in a Car Crash" and "War All the Time," haven't released new material since 2011. And they’ve got absolutely zero intention to do so, probably because they’re only going to be performing through the spring before calling it quits again, this time for good. In October, Thursday’s members announced they were planning one final tour consisting of gigs where they’ll perform their two most influential albums, 2001’s Full Collapse and War All the Time, in their entirety on back-to-back nights. In short, if you’ve never seen Thursday live, this is basically your last chance. Diamond Victoria

What could be better than touring the world alternately with a trendsetting jazz group (Kneebody) and an Italian pop star (Luciano Ligabue)? For bassist Kaveh Rastegar, what's better is to keep doing the former while spending more time in Los Angeles at the forefront of all things musically interesting and happening. Some of his other projects over the years include writing for Bruno Mars, Cee Lo Green, Meshell Ndegeocello De La Soul, and performing with both Sia (as musical director) and John Legend. At Valley Bar this week, Rastegar will perform some of his solo efforts, as well as arrangements of his favorite songs. Yes, you should go. Gary Fukushima 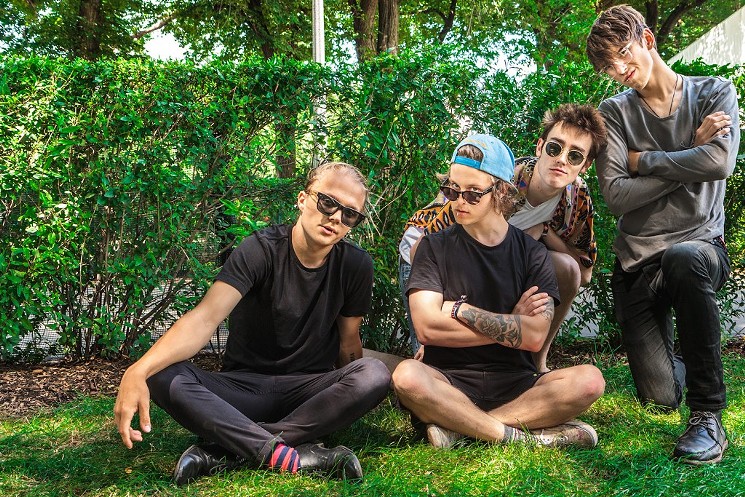 When each member of the band shows up to practice with their own new song, it can be tough to perfect them. On the 2018 album Bambi, Hippo Campus’ experiments of layering more electronic sounds onto their indie pop sensibilities and risk-taking songwriting process shows on narrative tracks such as “Doubt” and “Honestly.” While making music is their main occupation, Hippo Campus also hopes to help dismantle sexism and toxic masculinity through their self-critical lyrics and by using their platform. Julian Hernandez