A large-scale art display at the Full Moon Festival from January 2020. Benjamin Leatherman
This past summer, Phoenix New Times asked several local festivals about how they were preparing for a post-COVID future. Among the events featured, Full Moon Festival had landed firmly on the side of caution by axing all planned events.

"2020 for us was a lot of heads down, behind-the-scenes work," says Colter Stillwell, the festival's co-founder, "a lot of defining more clearly our vision and the direction that we want to go."

As painful as it was to cancel — Stillwell says they had tried delaying instead several times prior — ultimately the decision came in support of the arts community at-large.

"I think the biggest lesson is that what we are creating together is significantly larger than any individual or any one of us," Stillwell says. "It's more than just a club or a festival full of people — it's legitimately a community that I have seen firsthand support each other throughout all this."

But now, as more events are returning, the fest will return on Saturday, September 18 at The Pressroom. Stillwell says the aptly named Full Moon Festival: Welcome Home features old favorites, including band performances, local food trucks, various workshops, a silent disco, art installations, and much more. The event, though, isn't just about embracing the past.

"This event is completely about re-creating kind of where we left off when the pandemic hit, but integrating all the things that we learned throughout the pandemic," Stillwell says. "So, really exploring that question of how do we build a home together and make festivals and events as something that's more a part of our everyday lives rather than maybe something we voyage out to once a year."

The biggest challenge has been working with the venue's roughly 80,000 square feet of space, but Stillwell says the larger venue provides some interesting opportunities.

"So, production-wise, it was about figuring out how to lay out power and sound," Stillwell says. "But I'm really excited to be able to have more space. We can add a lot of elements that we want to add to the festival." 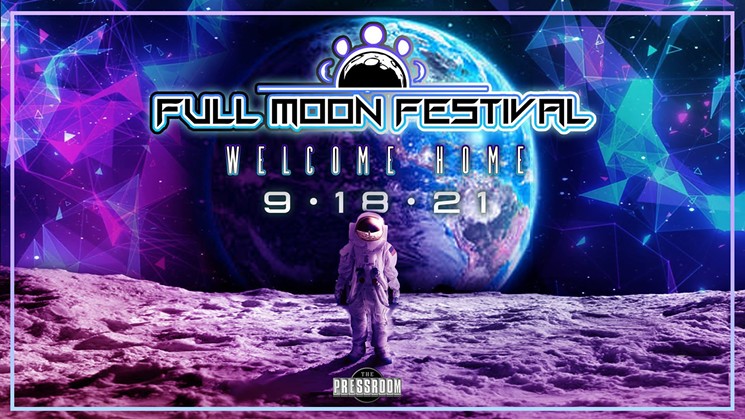 One of the biggest such additions, amenities-wise, is a safe space, where guests can step away from the event, with staff serving as "the mediators between attendees and security." It's not a mere gimmick, though, and as Stillwell explained back in June, it's a vital part of the Full Moon experience.

"We've always specialized in providing safe spaces for those who are on the outskirts of things," he says. "Our events have a lot of seating, and a lot of spaces that you can sit down and connect with someone to separate from being packed into a crowded club."

Part of building a safe space has also been enacting measures related to COVID. Stillwell says they'll follow mandates from the city, county, and state regarding vaccinations and masking, and the fest will have things like sanitizing stations on hand. But it's more than just safety, though, and Stillwell says the pandemic has had a massive effect on how everyone plans events.

"I think throughout COVID already, we've seen a resurgence of more local and more unique, creative, and fun events," he says. "So it definitely has had long-lasting effects on the events industry. My hope is that all festivals are taking greater time and thinking about what's their role in their community."

In the time between events, Stillwell and his staff have had a chance to reevaluate the larger goals/objective of Full Moon. In the most basic sense, they want to celebrate all things Arizona above anything else.

"We are planning on offering a Full Moon Festival, now and beyond, where it's always going to be hyper-local," he says. "We get a lot of people asking us about when are you going to start looking at this big name, or these people, or just moving in that direction. And that's just the opposite of what we're doing."

As Stillwell explained back in June, "We are not a festival. We are a movement. The [fest] is 100 percent nothing without all of the incredible, incredible local artists, musicians, DJs, and creators."

Colorful attendees from a Full Moon event in January 2020.
Benjamin Leatherman
That's not to say Full Moon hasn't booked national or even international artists/talent before. Rather, the event staff just aren't interested in trying to be like a Coachella — at least not directly.

"We don't want to compete with them, or a better way of phrasing it, we don't want to be them," Stillwell says. "Though I do think our experience does compete with those experiences. There's no doubt that Coachella puts on some of the most incredible art. ... We'll do the best that we can do in the sort of bubble that we want to operate within."

Part of that is that the event wants to cater to a very specific kind of talent: one that feels closely aligned with the Valley itself.

"We want community leaders," Stillwell says. "We want people who understand the space that is created at Full Moon and the unique role that they play in it."

"I think what bands choose to come here is a byproduct of who Billboard is saying is getting listened to," Stillwell continues. "What you're seeing at the Full Moon Festival is just one iteration. That is the byproduct of years and years of work that locals have put in to create amazing local events, from all of the underground warehouse parties to forest raves in Flagstaff. This is what this community is, and they would exist no matter what." This isn't just a display of local pride, though. Stillwell says that it's also about standing up for certain causes, and trying to emphasize the pillars of "diversity, equity, and inclusion" that Full Moon represents.

"So many issues have come up this year that cannot be ignored," Stillwell noted back in June. "Whether it's inclusivity and racial justice, or the environment and environmental impacts. We want to see art and art installations that are doing justice to the experience that we just collectively had. Like, slowly carrying us out of that and still honoring that experience."

He added, "It's really important to us, especially with how many businesses went out of business, or just how much the downturn in the economy tore through small venues, to provide resources. If we're going to be the showcase of the music and arts revolution that's happening in Phoenix, we want to provide platforms for these artists. To provide networking or to be a local hub for these artists."

All of this boils down to what Stillwell in June called a "musical revolution," adding that "everything is 10 times stronger than it was before COVID." And like any meaningful movement, Stillwell and company are sure it's going to be a hit. They've certainly had enough time to plot for just such an outcome.

"The selling point is just to come out and see what's happening in your town," Stillwell says. "And once you're there, you're hooked."
Full Moon Festival: Welcome Home is set for Saturday, September 18, at The Pressroom, 441 West Madison Street. Door open at 8:15 p.m. Tickets are $20 through Eventbrite.
KEEP PHOENIX NEW TIMES FREE... Since we started Phoenix New Times, it has been defined as the free, independent voice of Phoenix, and we'd like to keep it that way. With local media under siege, it's more important than ever for us to rally support behind funding our local journalism. You can help by participating in our "I Support" program, allowing us to keep offering readers access to our incisive coverage of local news, food and culture with no paywalls.
Make a one-time donation today for as little as $1.
Chris Coplan has been a professional writer since the 2010s, having started his professional career at Consequence of Sound. Since then, he's also been published with TIME, Complex, and other outlets. He lives in Central Phoenix with his fiancee, a dumb but lovable dog, and two bossy cats.
Contact: Chris Coplan
Follow:
Twitter: @CCoplan