Sum 41 Tell the Story Behind Chuck 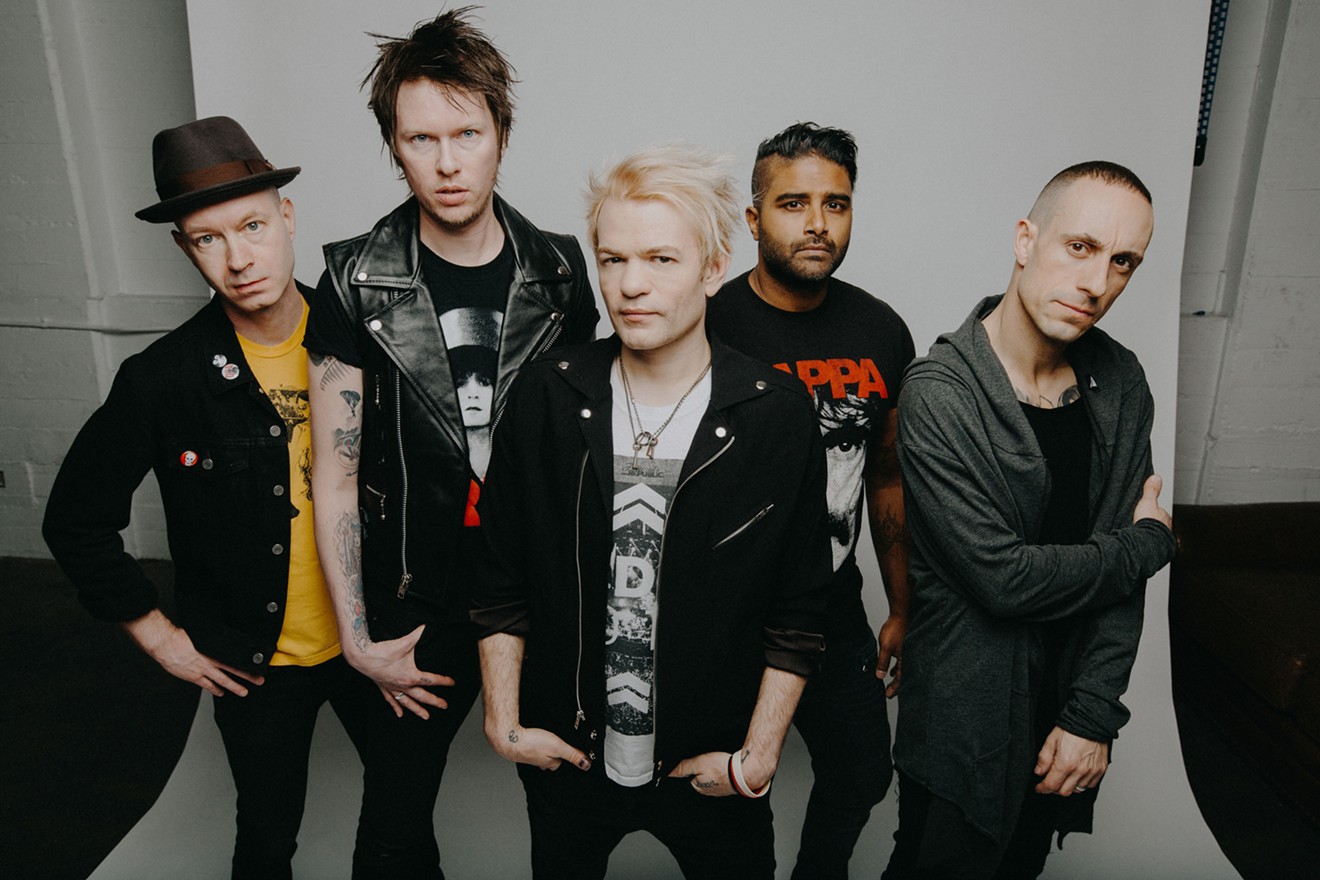 Sum 41 celebrate 15 years of Chuck on October 20. Ashley Osborn
The last time Sum 41 played a gig in the Valley, it was under some unusual circumstances.

“It was this big water park, and it was the first time we’d ever played in the water,” says bassist Cone McCaslin, in conversation with Phoenix New Times. “The stage was in the water, and the crowd was also in the water. It was this weird show — I don’t know if it was called Splash Fest or something like that?”

The wet concert in question was Band Splash at Big Surf Waterpark in Tempe, which the band headlined in April.

Six months later, the skate punk band are already coming back to Tempe, though this time it’ll be in a more conventional setting. Their Order in Decline Tour comes to the Marquee Theatre, on Sunday, October 20.

The occasion will still be special, though. In addition to emphasizing tracks from Order in Decline, which came out in July, Sum 41 will be bringing back songs from their third studio album, Chuck, in celebration of its 15th anniversary.

The concert commemorates not only the music, but also the time the band spent filming a documentary in the Congo for the organization War Child Canada, to raise awareness in the aftermath of the Second Congo War.

“Three million people had died … and the news wasn’t reporting on it — it wasn’t mainstream news,” McCaslin says. “We were interviewing child soldiers who had fought in the war that were 12 years old … and girls who were accused of witchcraft and basically ousted from their families.”

“Seven days in,” he says, the ceasefire suddenly ended, and the band was trapped in a hotel while bombs went off and shook the building. That’s where Chuck, the album’s namesake, comes in.

“Chuck was basically the only U.N. guy in the hotel, so he took it upon himself to be the guy,” McCaslin says, recounting how Chuck organized protection via tanks and machine guns so the people in the hotel could escape. “The guy who saved us from it all, his name was Chuck, and we named the album after him.”

The coming Tempe show will benefit children in the Democratic Republic of the Congo, among other war-torn areas, with $1 from every ticket sold on the tour going to War Child.

“War Child builds schools, builds things to help kids rehabilitate from these wars,” McCaslin says. “So they’ll go to these countries in the world that have gone through wars, and try and help kids recuperate and get back into somewhat, hopefully, of a normal life, and continue on with their life in a positive way, through schooling, through medical, through anything they really need.”

A lot has changed in the world since Chuck’s 2004 release, but McCaslin says Sum 41 really hasn’t.

“A lot of us have kids now, so family life has come more into the equation. Other than that, I still feel like we’re somewhat of the same people,” he says. “We don’t party as much as we used to. The thing that we went through in the mid-2000s, late 2000s was some heavy partying. So it’s a little bit more mellow now on that front.”

Sum 41 are scheduled to perform at Marquee Theatre on Sunday, October 20. Tickets start at $33.50 via Ticketweb.
KEEP PHOENIX NEW TIMES FREE... Since we started Phoenix New Times, it has been defined as the free, independent voice of Phoenix, and we'd like to keep it that way. With local media under siege, it's more important than ever for us to rally support behind funding our local journalism. You can help by participating in our "I Support" program, allowing us to keep offering readers access to our incisive coverage of local news, food and culture with no paywalls.
Make a one-time donation today for as little as $1.