The Rhythm Room Jukes and Jives With the Times 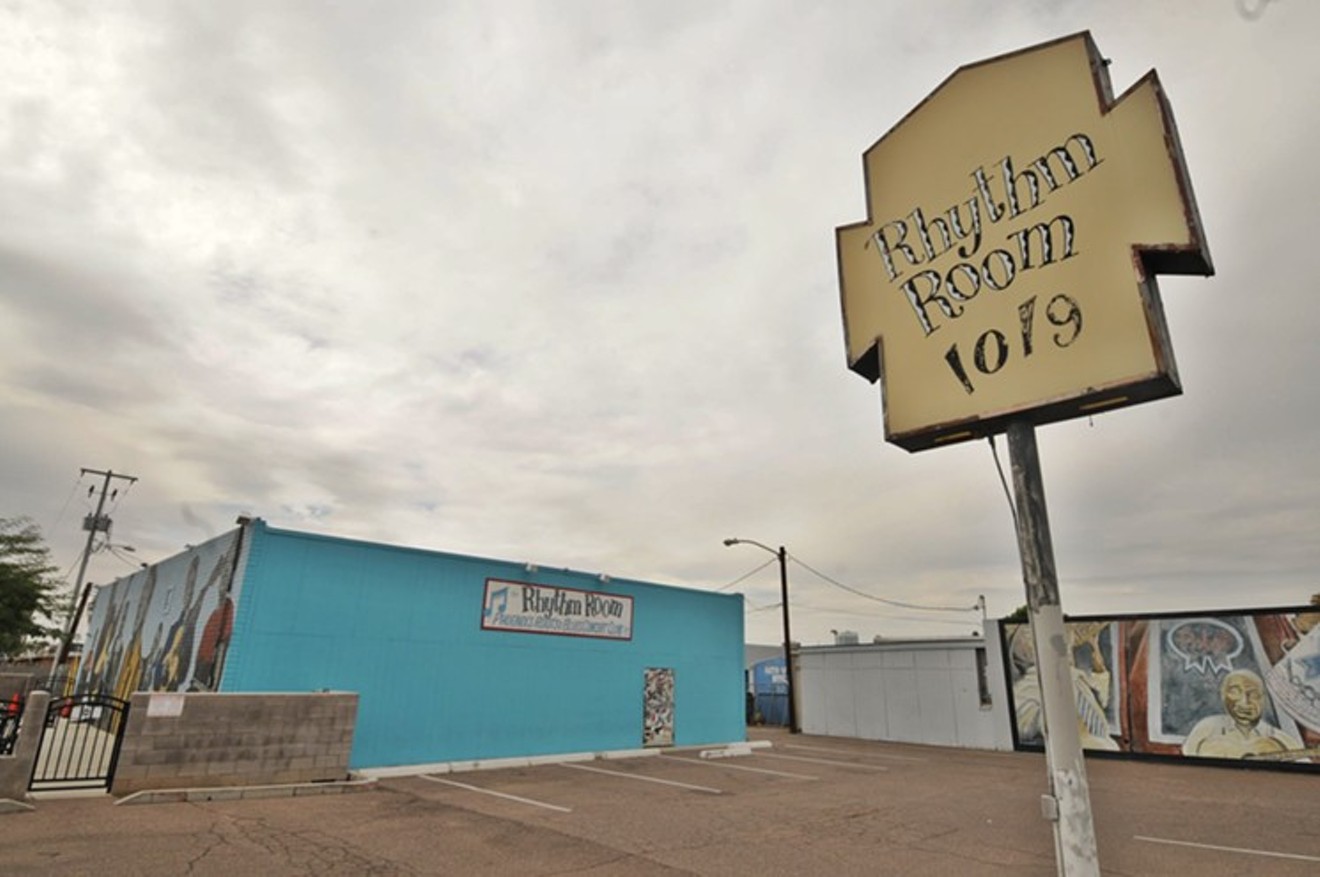 The exterior of The Rhythm Room in 2016. Benjamin Leatherman
Since its opening in 1991, The Rhythm Room has defined blues and roots music in the Valley. But when seasoned musician/producer Bob Corritore was first charged with opening up shop, he wasn’t exactly an expert.

"It was a hard transition," he says. "To go from the creative and abstract to all that left-brain business. I had to do my best Jekyll and Hyde to survive."

But there’s no denying the venue’s success, and over the years, blues legends like Jimmy Rogers, John Primer, Johnny Rawls, and Pinetop Perkins, among others, have brought the house down. Corritore was so successful, in fact, that he bought out the owner in 2001 — which proved to be less than fortuitous timing.

"I took over right around [9/11]," he says. (The close date was April 4, 2001, Muddy Waters' birthday.) "And everyone in the country just went to this place of healing, and people were more interested in safety over celebration. We could’ve easily gone down like other venues, places like Nita’s Hideaway and Bash on Ash."

Instead, Corritore says the experience made it clear that "we’d have to reinvent ourselves and open up to new music," adding, "I let all types of promoters have access to the club. You just have to go with the flow." And maintaining the flow meant making hard choices.

"There are these huge decisions people don’t think about when paying a small cover," he says. "Like, the $2,000 for insurance or the $1,000 in repairs." Corritore adds that he took out a loan for "a multitude of things," like expanding the patio and paving the parking lot, that he's still paying on.

Corritore says that all of the best venues change with the times and the marketplace, and he’s done what he can to flourish, adding, "I can’t survive on just eight weekend nights per month" of the blues. But he says the transition hasn’t been entirely painful, and he’s learned to appreciate other genres and styles.

"I was at a blues show [once], and Danny Zelisko announced [an upcoming show by] Flock of Seagulls and people started booing," he says. "That left an impression on me: This band creates reactions, and maybe they're not always a great reaction, but still a reaction. I thought I can take this energy and do something with it."

Corritore adds that over the years he’s had great non-blues experiences at The Rhythm Room, including seeing Weezer and The 5.6.7.8's. The venue's also booked a bevy of indie artists, including Ceremony, Poliça, Black Lips, and Sebadoh.

Ultimately, Corritore says all good music has "a soul or vibe," and he’s more interested in curating a dynamic live experience. He adds, "I’ve done my best to keep this as solid of a business as I can. I make changes every year and always assess the marketplace. You got to go with what works, but there’s no logic to it."

Luckily, Corritore isn’t alone in keeping the space afloat. He praises a support staff that includes Ariel Monet, whose been booking non-blues shows for over a year. She says Corritore has always been "excited" about making changes and encouraged her to experiment.

"We’re trying to do a monthly punk rock art show," she says. "Or an acoustic-by-candlelight night. Even with the punk show, it’s more of an attitude thing; it’s about quality over a certain genre. In the last five years, I’ve really seen people up open to more genres."

Monet adds that the venue continually will expand its offerings, and she’s interested in trying to get more national acts as well as more up-and-coming touring bands. She adds, "I love to do mixed-genre bills. This is a place where you can get cheap drinks and have a good time."


Shea Marshall has played at the venue since 2003 alongside various bands, including Lucky Devils and Sugar Thieves. He says that he’s seen what a distinct lack of flexibility has done elsewhere.

"There’s places that are getting crushed because they’re committed to what their version of jazz is," he says. "Why not keep the lights on? Michelangelo was a commissioned artist; someone bought that paint and marble."

What matters, according to Marshall, is that the venue remains "pure," adding, "It’s nice that all the seats face the stage. And there’s no televisions to distract you. It’s a music venue.”

And the music at the perpetual center of that establishment? Blues, always and forever.

"Blues is always a priority to us," Corritore says. "But it’s a place you can find a connoisseur's blues; it may not be that something the average person knows, but the people who do know relish it."

Monet says the tactic’s worked, and the venue has "committed followers who will always support us because of the community." And along the way, Monet adds, even these hardened blues fans have found something new to celebrate. Because change may be a part of business, but some things remain eternal.

"Rhythm Room is always going to be a blues club," Monet says. "But all art is equal."

Rhythm Room. 1019 East Indian School Road; 602-265-4842; rhythmroom.com.
KEEP PHOENIX NEW TIMES FREE... Since we started Phoenix New Times, it has been defined as the free, independent voice of Phoenix, and we'd like to keep it that way. With local media under siege, it's more important than ever for us to rally support behind funding our local journalism. You can help by participating in our "I Support" program, allowing us to keep offering readers access to our incisive coverage of local news, food and culture with no paywalls.
Make a one-time donation today for as little as $1.
Chris Coplan has been a professional writer since the 2010s, having started his professional career at Consequence of Sound. Since then, he's also been published with TIME, Complex, and other outlets. He lives in Central Phoenix with his fiancee, a dumb but lovable dog, and two bossy cats.
Contact: Chris Coplan
Follow:
Twitter: @CCoplan