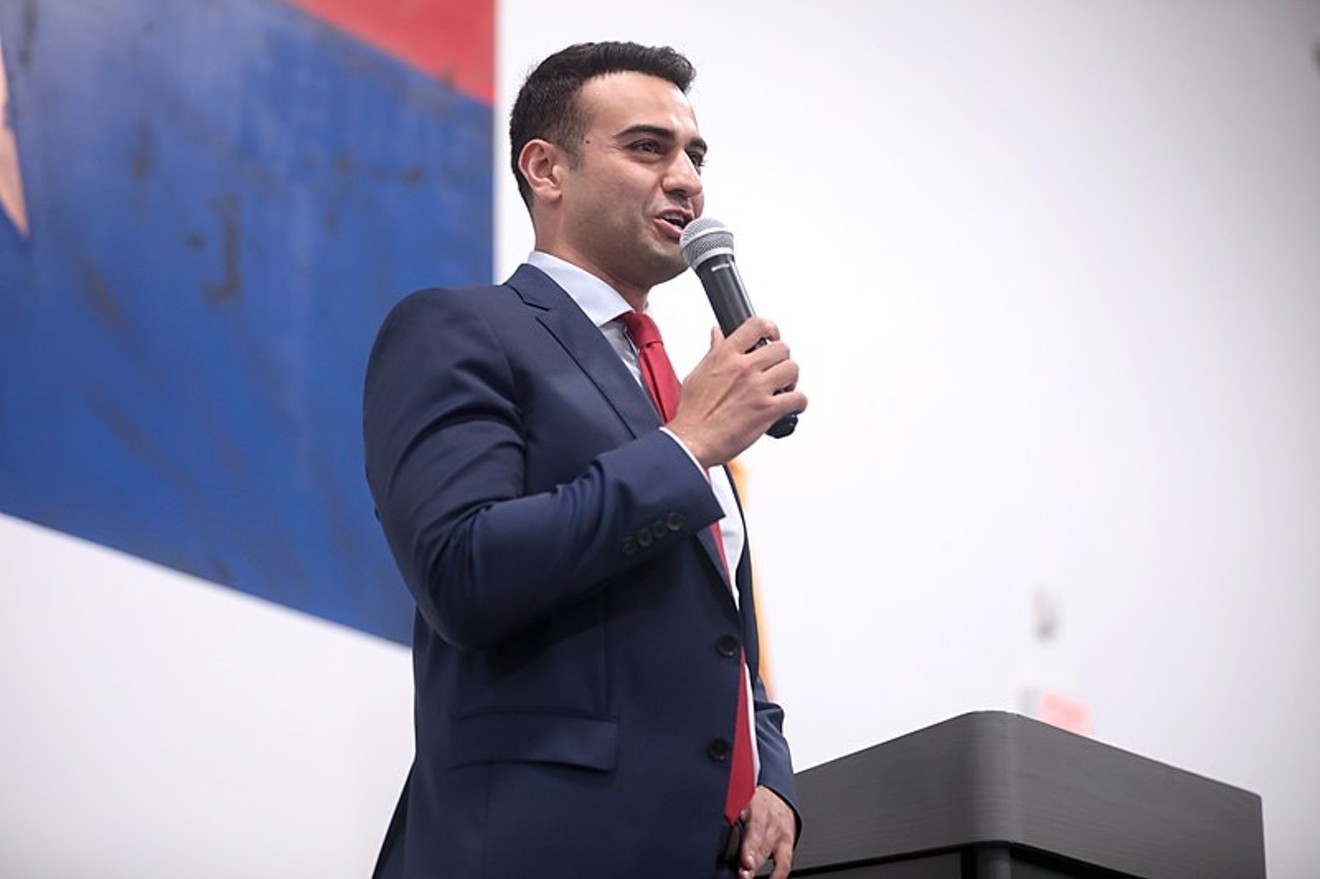 Abe Hamadeh spoke briefly at Kari Lake's press event on October 27. About what? His hatred of Phoenix New Times, of course. Gage Skidmore/Creative Commons
Arizona Republicans love political theater, and press conferences are their playhouse. Each of former President Donald Trump’s handpicked MAGA acolytes has found their foil — not across the political aisle, but in a pool of reporters.

On October 27, Lake held her latest rendition of Geraldo Rivera inside Al Capone's vault at her campaign headquarters. When she turned the microphone over to Hamadeh, the prickly 31-year-old wasted no time calling out the local news outlet responsible for reporting on his transgressions that then received a flood of national attention.

“The Phoenix New Times, is that trash organization here today?” Hamadeh asked before a horde of reporters for outlets as far away as France and Japan.

He’s taking up the mantle for Lake, who in 2019 said of New Times, "Fuck them. They're 20-year-old dopes. That's a rag for selling marijuana ads."

In August, New Times broke the story that Hamadeh boasted to an online message board in 2008 about voting before he was legally allowed to do so and altering his mom's ballot to vote for Democrat Barack Obama. Hamadeh responded by tweeting that New Times is “the propaganda arm of the Democrat Party. They are fake news.”

New Times also revealed that Hamadeh failed to include his income from two jobs, board membership, and his interests in businesses on a financial disclosure for his campaign.

At the press conference last week, Hamadeh doubled down. “You guys are playing cover for the Democratic Party, and you guys have become propagandists,” he said.

He was taking issue with another New Times story. Three days before Lake's press event, New Times reported that Brandon Rafi, the local attorney whose toothy mug is plastered on what seems like every billboard and bus shelter in town, donated a huge wad to Hamadeh’s campaign in September.

Hamadeh refused to provide a comment for that story. But he had plenty to say about it at the press conference.

“You reported on a donor of mine, doxxing him, putting his face on front page news, and trying to intimidate his First Amendment right to donate to my campaign and financially support me,” Hamadeh told the crowd as he again singled out New Times. “Think about it. You guys are fighting voter intimidation, but you guys are perpetuating donor intimidation as well by publishing this.”

Yet campaign finance reports are public documents, which means that donor names, addresses, contact information and donation amounts are, too. Doxxing is making someone's personal information public; the New Times published only Rafi's name and donation amount. Nevermind that the First Amendment has to do with freedom of religion, speech, press, and assembly.

“You all claim to be guardians of democracy,” Hamadeh chided reporters. “That’s offensive to veterans like myself who have actually served overseas.”

Hamadeh did serve in the military, but he’s also currently the subject of an investigation by the United States Army Reserve. While on deployment in Saudi Arabia in 2021, Hamadeh had some uniformed glamour shots taken that he later used as campaign material, which runs afoul of the Uniform Code of Military Justice.

During his campaign, Hamadeh also has lied about his experience as a prosecutor in the Maricopa County Attorney’s Office. He bragged about his trial experience, but personnel records showed he has never been to trial.

Yet it was Hamadeh at the Lake press event who told New Times, “You’re spreading these lies so quickly.”

That was moments before he spewed yet another antisemitic falsehood: “County attorneys are [George] Soros-funded, and they’re refusing to prosecute some of these basic crimes.”

Except county attorney offices are funded by tax revenue, state and federal grants, and funds from seizures and settlements, according to the Arizona Attorney General's Office. Not a Jewish billionaire who backs progressive causes. The Maricopa County Attorney's Office, long helmed by a Republican, received more than $126 million from the county for its current annual budget.

“The Jewish community remains incredibly tired of Hamadeh’s inappropriate use of antisemitic tropes and his normalization of antisemitism,” Paul Rockower, executive director of the Jewish Community Relations Council of Greater Phoenix, told New Times in response to Hamadeh’s comment. “It is truly shameful.”

Hamadeh trails Democrat Kris Mayes by three points, according to the latest poll from Phoenix-based OH Predictive.
KEEP PHOENIX NEW TIMES FREE... Since we started Phoenix New Times, it has been defined as the free, independent voice of Phoenix, and we'd like to keep it that way. With local media under siege, it's more important than ever for us to rally support behind funding our local journalism. You can help by participating in our "I Support" program, allowing us to keep offering readers access to our incisive coverage of local news, food and culture with no paywalls.
Make a one-time donation today for as little as $1.
Elias Weiss is a staff writer at the Phoenix New Times. A native of Charlotte, North Carolina, he reported first for the Northwest Arkansas Democrat-Gazette and was editor of the Chatham Star-Tribune in Southern Virginia, where he covered politics and law. In 2020, the Virginia Press Association awarded him first place in the categories of Government Writing and Breaking News Writing for non-daily newspapers statewide.
Contact: Elias Weiss
Follow:
Twitter: @ecweiss 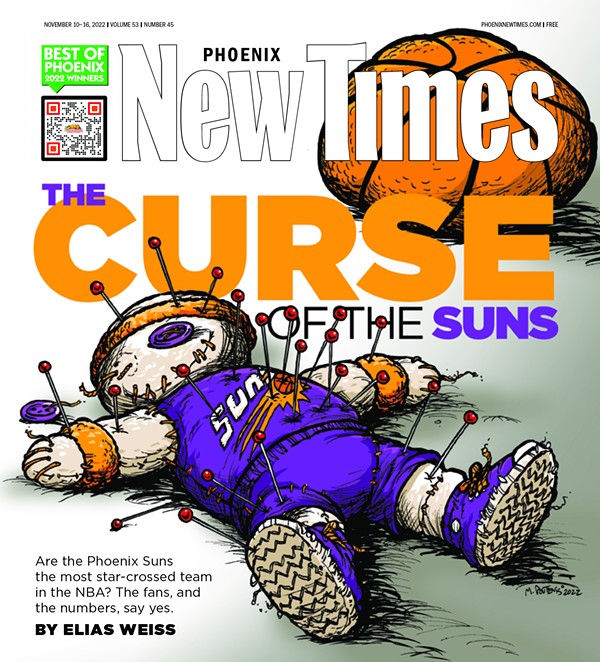