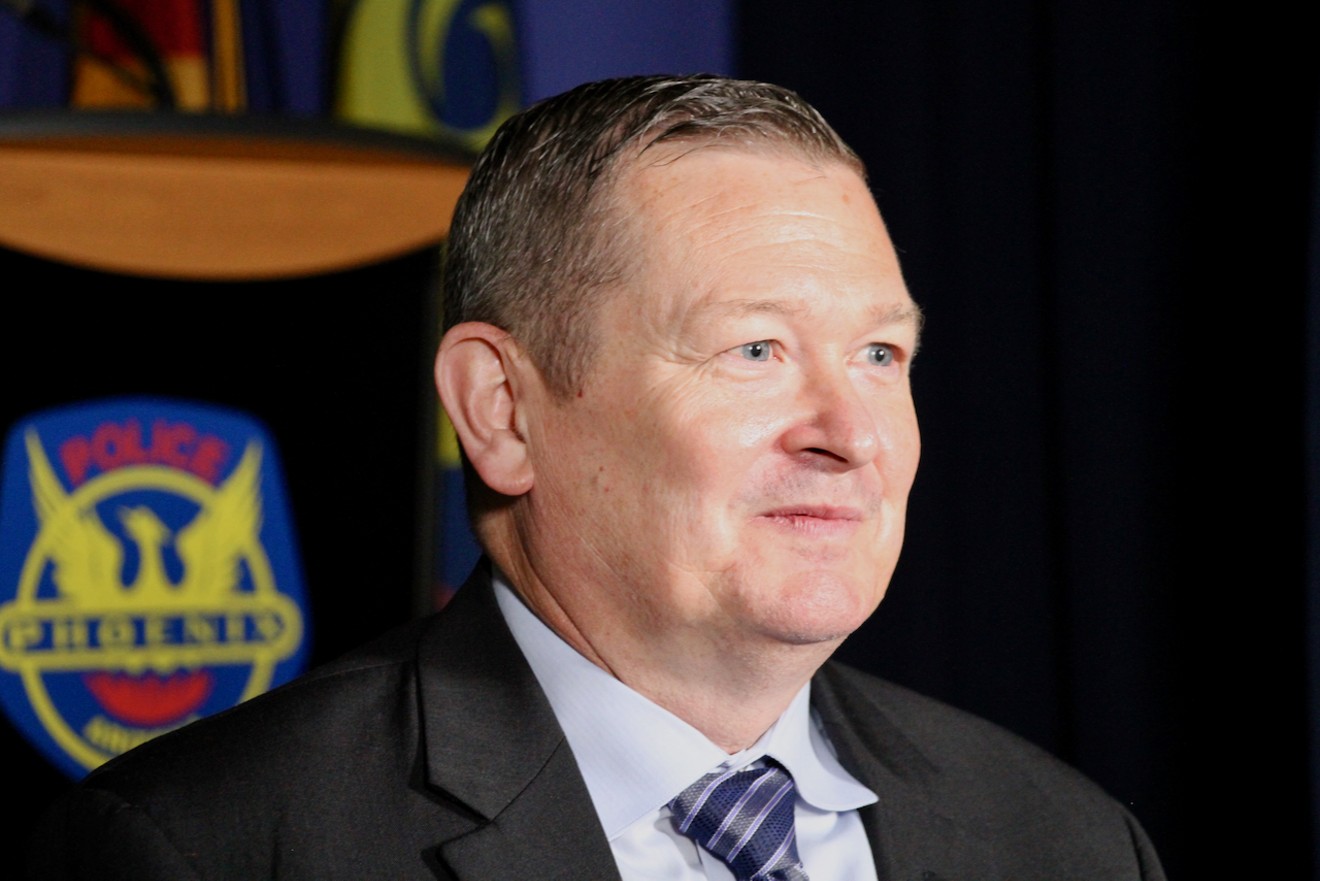 Michael Sullivan, Phoenix's new police chief, is making some changes at the department. Matt Hennie
After two months on the job, police Chief Michael Sullivan is making changes — at least tentative ones — at the Phoenix Police Department.

Sullivan announced his four-part plan for the department on November 21. Though not particularly detailed, the plan outlines focus areas for the chief: training in de-escalation, reviewing the use of force policy, and expanding the agency's use of alternatives to deadly force.

The plan is the first glimpse into changes under Sullivan's watch at the embattled agency. He was brought on in September to replace former Chief Jeri Williams after she retired. Sullivan, who receives a base salary of $232,000 per year with a contract that could last up to 36 months, was hired to help the department address the ongoing U.S Department of Justice probe into its practices.

The Phoenix Police Department declined to make Sullivan available for an interview this week. But in a statement he said, "This plan revolves around the concept that preservation of life is at the core of policing." He also repeated his previous comments that the agency should be "self-correcting."

Sullivan's plan includes a new series of briefings for officers on "the principals of creating time, distance and cover in critical situations," as well as new training developed by the Police Executive Research Forum, a research organization, on how to deal with "volatile situations with erratic and potentially dangerous subjects who are not armed with a gun."

The plan also mandates a review of the department's use-of-force policy and expands the arsenal of nondeadly tools officers can use while on patrol.

The plan seems tailored to address DOJ concerns about violence by Phoenix police officers. Lawsuits over excessive force cases have dogged the department. In 2018, Phoenix police shot and killed 23 people, which was the most among law enforcement agencies in the country. Officers also fired their guns at people some 44 times that year, a number that also led the nation. When the federal agency launched its wide-ranging civil investigation last year, it noted that use of force by officers would be a key focus.

In his review of policies, Sullivan will consider "standards known to be approved by the Department of Justice," according to the police department.

The DOJ probe started in August 2021 and has cost the city nearly $2 million. Once the feds release the results of the investigation, the city is likely to enter into a yearslong consent decree governing its policies. So far, DOJ investigators have asked the city for reams of police records and conducted site visits.

Sullivan has experience working in cities that have come under DOJ scrutiny. Before he joined Phoenix, he worked on compliance at the Baltimore Police Department, which for years has been under a consent decree. Before that, Sullivan was second-in-command at the Louisville Metro Police Department in Kentucky. Two years after Sullivan left Louisville, that agency, too, became a subject of a DOJ investigation.

Phoenix police plan to train 400 officers on pepper spray and impact launchers by the end of 2023.
Matt Hennie

A key component of Sullivan's plan is expanding the use of weapons other than guns by officers. The two that are highlighted are pepper ball launchers, which deploy a chemical irritant such as pepper spray, and 40 mm impact launchers, which fire sponge grenades. Both weapons, though particularly sponge grenades, can still cause serious injuries.

The use of deadly force by Phoenix officers has come under scrutiny lately. In September, officers shot and killed Ali Osman as he threw small rocks at their vehicles in a case that wide public outcry. The officers who shot him had bean bag rounds but elected not to use them.

In October, the department — alongside other law enforcement agencies in the Valley — suspended its use of bean bag rounds and stated that the ammunition was "traveling at a higher velocity than manufacturer specifications," according to Sergeant Brian Bower, a Phoenix police spokesperson. The agency announced in early December that it permanently ended its use of the weapon, according to Your Valley.

The bean bags are being replaced with 400 pepper ball and impact launchers by the end of 2023, Bower told New Times.

“He has a record of bringing out the best in public safety and working to create stronger and safer communities. I am optimistic for the future of Phoenix Police and look forward to continued work with the chief to make Phoenix an even safer city," Gallego said in a prepared statement.
KEEP PHOENIX NEW TIMES FREE... Since we started Phoenix New Times, it has been defined as the free, independent voice of Phoenix, and we'd like to keep it that way. With local media under siege, it's more important than ever for us to rally support behind funding our local journalism. You can help by participating in our "I Support" program, allowing us to keep offering readers access to our incisive coverage of local news, food and culture with no paywalls.
Make a one-time donation today for as little as $1.