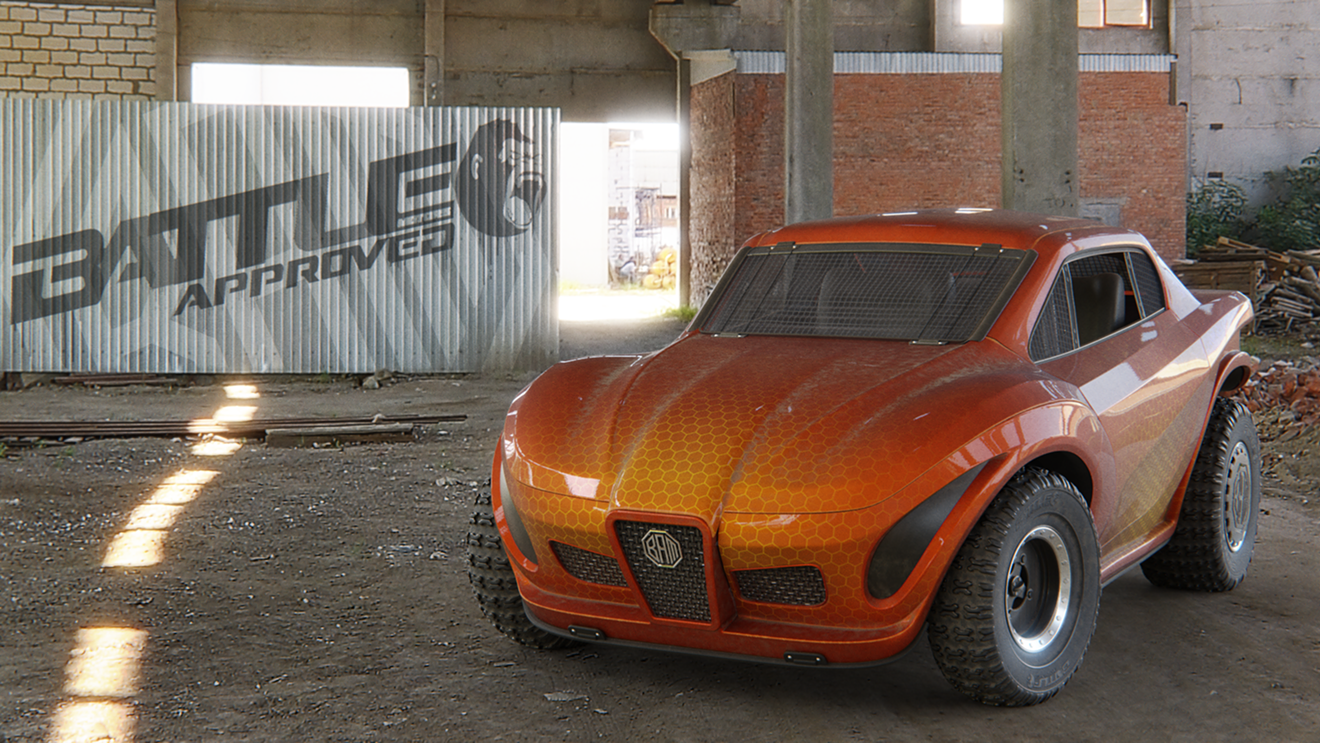 On the second floor of a luxe coworking space in the Biltmore District of Phoenix, Chris James hunkers over his desk, sipping a glass of seltzer water, planning his next move.


He’s steeling himself for a daunting task — to compete with the pioneering electric car kingpin Tesla, one of five American companies to eclipse a market value of $1 trillion.


In recent years, Phoenix has emerged as a hub for electric vehicles. Tesla, Lucid, Polestar, Rivian, ElectraMeccanica, and Atlis Motor Vehicles have all set up shop in metro Phoenix, with Lucid motors rolling out the first all-electric, made-in-Arizona vehicle late last year.

James’ idea is different, he said. It’s not a sedan, SUV, sports car, or truck. It’s kind of like all those rolled into one.


“We gotta compete against the big boys,” he told Phoenix New Times on Friday. “The only way to compete with them is to think differently.”


Across the globe, the electric vehicle market has continued an upward growth trajectory over the past decade with manufacturers and consumers focused on increasing energy efficiency, reducing fuel dependency, and decreasing carbon emissions.


After a string of successes in the entertainment industry, James founded the company in Phoenix in 2019 and styled it “BAM.”


“We’re a startup, but we know where we’re going,” he said. “I know Battle Approved Motors is going to be the future of off-road.”


Now almost through with that glass of seltzer, someone in the office makes a reference to James' position as CEO, and he snickers and shrugs off the title. 
James’ vision is what sets BAM apart in a crowded market full of incipient electric vehicle makers. It's the swagger of a sports car, the rugged performance of an off-road truck, the eco-friendliness of a Tesla, and the sleek software of an Apple iPhone.


The company is also developing models called the s102 and the e103, its flagship commuter model. These will be safer, professional UTVs that can transition easily between the trail and the road.


James couldn’t estimate what the range of the cars will be “due to better batteries dropping in 2023,” he said.


Electric vehicles on the market today can drive 275 miles on a full charge, on average, although some produced in Arizona can travel an EPA-estimated 520 miles between trips to the charging station.

Metro Phoenix is dotted with about 1,300 charging stations, one of several factors that led James, who lived in Florida during the coronavirus pandemic, to make a home in Arizona.


“We always wanted to be in Phoenix,” James said. “When I first came to Phoenix and saw the mountains, they looked fake. The first time you see it, it looks like a watercolor painting. That feeling is so unreal and amazing.”

The electric vehicle industry has ballooned in greater Phoenix thanks to the host of electronics companies based around the Valley, according to Jim Gillette, a retired auto industry analyst based near Grand Rapids, Michigan.


Electric vehicle brands look for electronics suppliers in close proximity, making Arizona an attractive choice for a home base. The state ranks second in the nation for projected tech job growth over the next decade, according to a May report from the Computing Technology Industry Association.

"It's also a retiree state," Gillette told New Times on Tuesday. "That would be an ideal vehicle for retired people. They’re usually only good for up to 200 miles, so if you’re not doing a lot of long-distance driving, it’s a very convenient vehicle."
click to enlarge Plans from Battle Approved Motors call for turning this empty plot near the Arizona-California border into a development that includes an off-road racetrack, homes and restaurants.
Chris James


It’s not just the natural beauty that attracted James to Arizona.


James recently purchased more than 200 acres of land in the tiny community of Yucca in Mohave County, about 25 minutes from Kingman and a stone’s throw from the California border. It’s a midpoint between Phoenix, Las Vegas, and Los Angeles.


Yucca is a town of just 96 people, but it plays an important role in Arizona’s automotive landscape. Chrysler and Ford each stake claim to proving grounds there, directly off of Interstate 40.


After eight months of shopping on Zillow and working with a real estate agent, James found his holy grail. It ticked all the boxes: near an interstate, off a paved road, and at a reduced risk of wind and dust storms, which are common in nearby areas.


Public records show that BAM purchased the 203-acre lot for $155,000. James noted that the company is “very close to acquiring another 280 acres” of land in the same area. “We want to build a mini community around that [track],” he said. “It’s a great location.”


His vision includes luxury condos for investors, upscale shopping, and adobe revival homes for Airbnb rentals. He hopes the area will entice attractions similar to his favorite places to go in greater Phoenix, including the Wild Horse Pass Hotel and Casino, and the Phoenix Premium Outlets.

“We have huge visions,” James said. “But what is the reality? The reality is that we just started. We’re a pandemic baby, born in the dirt.”

Construction of a track and permanent buildings is slated for completion in 2024, but James said he wants to start beta testing cars there next year. How Much Will It Cost?


Electric vehicles from BAM, however, will come with a sticker price more than double that.


“This is going to be an expensive vehicle,” James said. “Would it be sold in Camping World? If anything, it’s going to be in a Ferrari dealership.”

James predicted that hard-core off-road enthusiasts will spend another $50,000 to $80,000 at a fabrication shop on suspension upgrades and other customizations.


Of course, the more cars BAM sells, the more it can lower prices.


“Buying a car is the most miserable experience you can do,” James said.

That's why, when the vehicles become commercially available — in five to seven years, James hopes — the company has plans to meld the approaches of Tesla and Tempe-based Carvana, the used-car retailer.

You'll be able to customize and purchase your car online, then have it delivered to your driveway. 
James describes his idea as “Ferrari meets Tesla in the dirt.” The creator is as multifaceted as his invention.


James was born in Woking, England, where the British luxury automotive manufacturer McLaren is headquartered.


From a young age, he was captivated by extreme sports. He breakdanced and raced BMX professionally, while his father was a pro in the Formula One circuit.

James has also run a trio of successful U.K.- and U.S.-based record labels. He managed recording studios for Phil Manzanera of Roxy Music fame and worked as label manager for Bull & Butcher Recordingʼs U.K. division. He co-founded and managed Billboard Top 5 jazz label Internal Bass Records and Billboard Top 2 jazz group Down To The Bone. He also had a No. 1 record in Japan as a recording artist and sold more than 4.7 million units independently.


The show was renamed Your Country and ran until 2012. As the program came to an end, James reignited his love for extreme sports with Mod Kids USA, a four-part documentary series on Amazon Prime Video that follows tweens and teens ages 12 to 15 who raced “really badass mini trucks on a massive short-course BMX track,” James said.


Contestants on the show included NASCAR Truck Series racer Hailie Deegan. James hopes to bring famous Hollywood kids to the Yucca track and film a reality show that’s “like their own version of Formula One,” he said.


But creative work takes its toll over time.


“Working in the creative space is really, really hard,” James said. “You can get really depressed about it.” 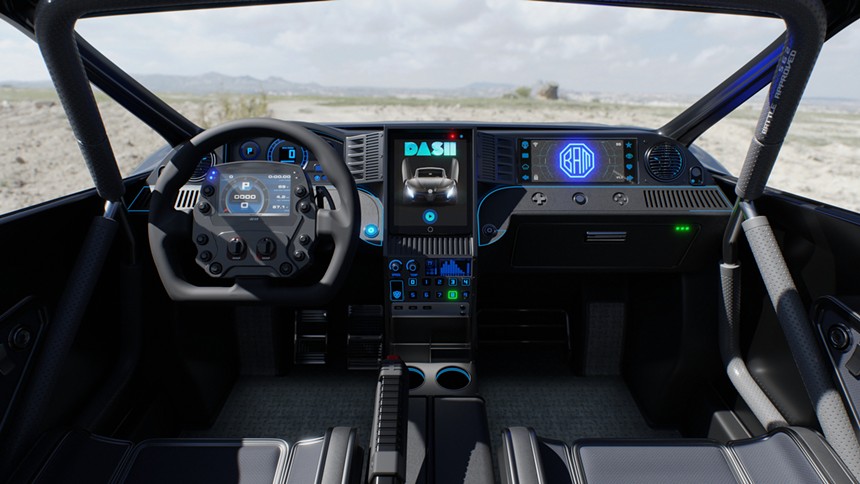 A massive multi-touchscreen interface will be featured inside each electric UTV.
Battle Approved Motors

Cash in the Bank, No Gas in the Tank


With his music career and Mod Kids USA in the rearview mirror, at the dawn of the pandemic, James was stuck at home in a mask.

Luckily, so was everyone else.


Last year saw a meteoric rise in online equity crowdfunding in the United States. Half of all crowdfund investments made in the last five years occurred in 2021, according to a January survey from Crowdfund Capital Advisors.


After striking out with investors offline, BAM raised $1.3 million from more than 1,500 investors online without even creating a concept video. The company claims that’s a first.

On its first $1 million, BAM doled out one-third on marketing, James said.

James wants to raise at least $5 million before floating a test model, which is slated for 2023.

But developing a new electric vehicle could take more than $6 billion, according to Gillette.

"There are a lot of disadvantages to electric vehicles," he said. "It takes a lot of patience and very deep pockets. We’ll see a lot of companies like this one get bought, and we'll see a lot go bankrupt."


Ford recently poured $3.7 billion into its own electric vehicle endeavors to create a new vehicle and expand the production of existing models.

Right now, James and his global team of 17 are focused on fundraising, design, and testing. Team members are spread across North America, Europe, and East Asia.


BAM is working to patent its vehicles, but James said he’d rather join forces with Tesla or Apple as he already has with Italian auto parts maker Sparco.


Sparco is designing the seats and steering wheels that will be featured alongside a massive multi-touchscreen interface inside each car.


“I would rather partner up than patent up,” James said.


When people hear the name Battle Approved Motors, it often conjures up images of Mad Max-style vehicles prepped for doomsday and outfitted with machine guns on top, James said.

But don’t get it twisted — the name comes from battling it out on the track and proving electric off-road race cars can be even more viable than their gas-guzzling counterparts.


With proving grounds planned in Yucca, James is seeking an investor to help build another off-road track in Phoenix.


“I love Phoenix,” he said. “I want to invest money in Phoenix. And when I get to my deathbed, I want to be here.”