Making Magic out of Cauliflower and Jackfruit, These Are the Best Vegan Dishes in Phoenix A note to The Coronado: Please never take the cauliflower tacos off your menu. Jacob Tyler Dunn
The problem with “best of” lists is they inevitably leave something off, and then piss someone off. The common singsong goes: How could you include this and not that?

We get it. We reluctantly and somewhat regrettably left off the vegan falafel sandwich from Haji-Baba in Tempe… and the standout Buffalo Chkn Sandwich from Trash Panda Vegan in South Phoenix… and the mac skillet from Pomegranate Café in Chandler. Heck, we’re mad at ourselves. But we've got to stop somewhere.

So think of this vegan list less as definitive and more as delicious, a lineup to get you started on your meat-free eating odyssey across Phoenix. But for you, it's certainly not a place to stop. 1740 East McDowell Road
602-252-2286
Authentic EthioAfrican has steadily grown since it opened 10 years ago, expanding from a 650-square-foot, two-table takeout joint to a 50-seat restaurant with a wrap-around bar, handcrafted seating, and Ethiopian-inspired artwork.

Owned by husband and wife Anduale Hassan and Elsabet Tirune, what hasn’t changed at the restaurant is the genuine service and traditional Ethiopian cooking, recipes that have been refined and handed down for generations.

Order the vegan combination platter and sop up the fragrant sides with bottomless injera, a spongy crepe-like pancake made with teff flour. The bread is topped with tasty wonders including meser wot, spicy red lentils fragranced with Ethiopian spices, fossolia, a green bean and carrot stew, keyser beet and potato salad, shiro wot chickpeas, and gomen collard greens spiced with ginger. This is a fest best enjoyed with friends. These rich, tender morsels deliver a juicy, charred, and smoky flavor. It all comes atop heaps of homemade tortilla chips that somehow manage to keep their crunch despite the torrent of toppings, probably because they come out fresh from the fryer, all hot and blistery. These loaded lovelies are listed under “sharables” on the menu, but there's no shame in keeping them all to yourself. 929 East Pierce Street
602-495-1111
If there was such a thing as a perfect bite, the jackfruit fries from Welcome Diner would come pretty close. It starts with the presentation. A generous basket of shoestring fries – the crispy-edged kind with skins intact – are piled with meaty morsels of jackfruit that are beer-braised and spiced just right with hints of cumin and cinnamon.

Then on goes cabbage slaw, a slightly sweet, slightly sour topper that adds the perfect amount of crunch and color. Finally, a mustard-based Carolina barbecue sauce balances it all out. The whole thing is just four seemingly simple ingredients. But when combined into one mouthful, you get a hit of crunchy and creamy plus savory and satisfying, a total taste bud ignitor that sings with flavor and feast appeal. Oh, and it just happens to be vegan. A note to The Coronado: Please never take the cauliflower tacos off your menu.
Jacob Tyler Dunn

Cauliflower Tacos at The Coronado PHX

2245 North 12th Street
602-767-8133
There’s a reason The Coronado never plans on taking the cauliflower tacos off their all-vegan menu. Patrons would revolt.

By far the most popular and praised dish, these hand helds tick all the boxes of what makes a great taco. Corn tortillas are crisped up on the grill. Generous florets of cauliflower are coated in masa and beer-batter and deep-fried until creamy on the inside with a crispy outer crust, before they’re dressed up with crunchy pepitas, vibrant strips of spinach, creamy avocado dressing, and wedges of lime. All together it’s a totally composed dish with a comforting vibe. A total look-alike to the Golden Arches’ double-decker, this one comes with two hand-packed, plant-based patties made with a combo of Beyond Meat and textured soy protein. They so closely mimic McDonald’s, if you close your eyes, you wouldn’t know the difference. 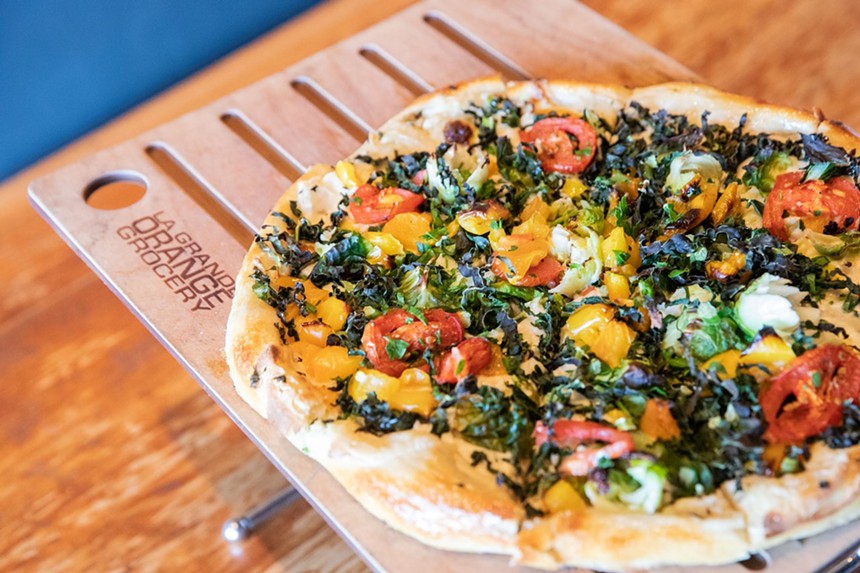 This pie comes loaded with piles of plump roasted tomatoes, yellow peppers, Brussels sprouts, and oodles of crispy kale. Every bite is enhanced by a signature sourdough that imparts a tangy chew and ensures no crusts will be left behind.

But the real standout here is the house-made cashew cheese, a secret recipe that turns the whole pie into an ooey, gooey indulgence. Insider tip: You can also sub vegan cheese on the veg-forward Rocket Man and Mother Earth pizzas. A trio of vegan tacos from Earth Plant Based Cuisine.
Allison Young

1325 Grand Avenue
480-465-2110
When the craving for tacos hits, head to Earth, a family-owned and operated all-vegan Mexican restaurant on Grand Avenue. But what to order?

But if we had to pick a favorite, it would have to be the al pastor tacos with tender seitan meat marinated in adobo sauce paired with diced onion, caramelized chunks of grilled pineapple and creamy avocado salsa. Absolutely wash it down with a house-made agua fresca or horchata. But the must-order item here is the buffalo cauliflower. A whole head of the stuff is battered in flour, coconut milk, and vinegar, for a vegan spin on buttermilk, then flash fried to crispy perfection, and tossed in buffalo sauce for a spicy finish. The hefty chunks are plated with creamy house ranch, crumbly gorgonzola, and celery strips for an indulgent helping that’ll test even big appetites. 3417 North Seventh Avenue
602-254-6374
When you want to slurp noodles with your meat-eating friends, head to Pho Noodles, a Vietnamese standout with steaming bowls of pho and perhaps the fastest service in Phoenix.

The majority of the menu includes meat, but the vegan phở chay is so flavorful. Lacy rice noodles, vibrant vegetables, chunks of tofu, crunchy bean sprouts, sliced jalapeno, and fresh herbs float in a heady broth layered with spices and simmered for hours. It could turn anyone vegetarian. Start with the gỏi cuốn chay or tofu spring rolls, meat-free packets of fresh vegetables and Vietnamese herbs rolled tight in rice paper, or the tofu rang muối, crispy fried tofu bites coated in pepper and salt, for a vegan feast.
KEEP PHOENIX NEW TIMES FREE... Since we started Phoenix New Times, it has been defined as the free, independent voice of Phoenix, and we'd like to keep it that way. With local media under siege, it's more important than ever for us to rally support behind funding our local journalism. You can help by participating in our "I Support" program, allowing us to keep offering readers access to our incisive coverage of local news, food and culture with no paywalls.
Make a one-time donation today for as little as $1.