Tacos Barbon, a popular Buckeye food truck, has opened a brick-and-mortar inside the Holiday Inn on Dysart Road in Goodyear. Tacos Barbon
With restaurant space at a premium these days, food truck owners in the Valley have to get creative if they want to open a brick-and-mortar without the hefty cost of building from the ground up. Tacos Barbon, a popular food truck commonly seen around Buckeye and other parts of metro Phoenix, recently signed an agreement with the Holiday Inn off Interstate 10 and Dysart road to bring their Mexican street tacos to the hotel permanently.

Owners Isai and Karina Martinez opened Tacos Barbon inside the hotel about a month ago. The decision to open their restaurant inside a hotel comes down to proximity to their home base in Buckeye and operating in a commercial kitchen, says Isai Martinez.

"It's a different type of concept," he says. "We get people that are more curious than anything. When I explain it to someone, I compare it to a Starbucks inside a Fry's [grocery store]."

The married couple started a taco cart in 2019 as a weekend catering gig for extra income. At the time, Isai had a career as a department head for a local business in the architecture field but became out of work when the pandemic hit in 2020. He and Karina decided to turn their taco-making hobby to the next level to make ends meet.

"I never expected things to continue the way they did," says Martinez. "The situation turned into an opportunity to get by until I got another job in my field. After a month, we were doing well enough to think this could work full time." 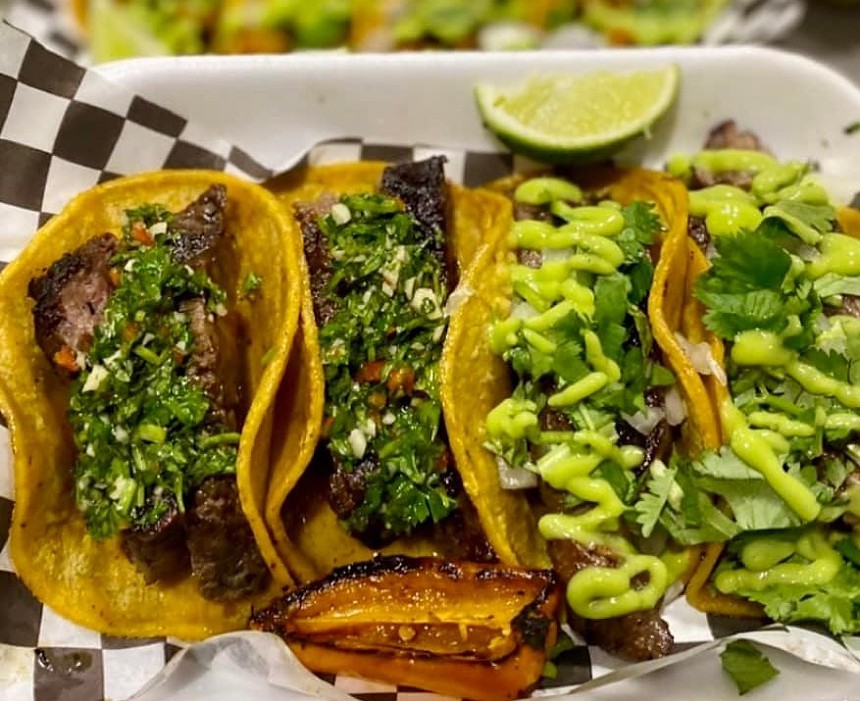 Since opening inside the Holiday Inn, Tacos Barbon has expanded its menu with red tacos and mini dillas. The red taco ($3.85) is a cheese-crusted taco with birria beef cooked with spices and peppers. It comes with a dipping sauce available with or without meat.

"Our sleeper is the al pastor; it's more savory than sweet," he says. "That is more of a Sonoran thing, where my family came from."

Tacos come complete with guacamole, onions, and cilantro on a house-made corn tortilla. The salsas, meat, guacamole, and tortillas are all made fresh daily. Refreshments like horchatas come in 32-ounce cups ($6.00) or grab a cucumber-lime refresher ($6.00) or Mexican soda ($3.00).

"All around, we use high-quality products and meats, as we stand by our motto of 'Not Your Average Taco,'" Martinez says.

Martinez says they are currently remodeling the dining room, enhancing the lighting, and adding tiling to the floor. Other changes include new TVs and additional seating. Martinez says the improvements should be complete by January 11.

"I want people to leave overall satisfied with the experience, the quality of the food, the vibe," he says.

Tacos Barbon
1118 North Dysart Road, Goodyear
Sunday through Thursday, 4 to 9 p.m.; Friday and Saturday, 4 to 10 p.m.
KEEP PHOENIX NEW TIMES FREE... Since we started Phoenix New Times, it has been defined as the free, independent voice of Phoenix, and we'd like to keep it that way. With local media under siege, it's more important than ever for us to rally support behind funding our local journalism. You can help by participating in our "I Support" program, allowing us to keep offering readers access to our incisive coverage of local news, food and culture with no paywalls.
Make a one-time donation today for as little as $1.