Luckily, in downtown Phoenix, amid the buzz of construction-induced traffic and confusing one-way streets, there are plenty of places to chill.

But some spots are decidedly off the beaten path, available only to those who know the secrets of the city’s back alleyways and building basements, and the histories they hold. These places are perfect for those looking to escape the heat and disappear for a while to unwind.

Here are a few of our favorite secluded and mysterious Phoenix hangouts hiding downtown, waiting for customers to sip on a cold one and dream of more temperate days. Wednesdays and Thursdays, 5 p.m. to midnight; Fridays and Saturdays, 5 p.m. to 1 a.m., Sundays, 5 to 11 p.m.
Behind the black bungalow that houses Thai restaurant Lom Wong, across from the Cambria Hotel near Portland and Third Streets, lies Khla, an Asian-style cocktail bar. Khla means tiger in Khmer, and you don’t have to look hard to find one.

Follow the alleyway to a purple-lit sign with the striped orange animal, dead center, and you have arrived. Venture through a large door into a dark bar speckled with tealight candles and neon lights that illuminate golden lion figurines.

Order the Manila Vice, a bright purple drink made of Filipino and Jamaican rums, ube, a purple yam that gives the cocktail its color, coconut, calamansi citrus, orange, and pineapple. The sweet concoction will come to you in a wine glass topped with pastel mochi candies.

For something more spirit-forward and less sweet, try the Khla Martini with perilla tea-infused sherry, vermouth, and eucalyptus bitters. Head out to the patio adorned by hanging fabric lanterns, floral tablecloths, and trippy black and white murals that will beckon you to enter the vortex as you down your drink.

And if you get hungry, small bites like fried chicken and sticky rice from Lom Wong should do the trick. 50 East Adams Street
602-245-6026
Fridays and Saturdays, 9 p.m. to 1 a.m.
It may be tucked inside the Renaissance Phoenix Downtown Hotel, but tourists aren't stepping foot inside Melinda’s Alley unless they really know their way around. The dimly-lit basement speakeasy can be accessed from an alleyway north of the hotel between Central Avenue and First Street.

A colorful mural titled Malinda marks the entrance, commemorating Malinda Curtis, a Black woman who lived in the neighborhood in the late 19th century and the namesake of the bar. Her hair is aflame in bright shades of blue, yellow, and orange, with an unassuming door to the bar in the middle of the colorful mural.

Descend the stairs into a red-lit concrete basement. The location once housed the Hotel Adams, an 1896-built luxury hotel that was destroyed by a fire in 1910, hence the flames depicted in the mural. And the bar's red lights are another ode to Malinda, a charming and rambunctious woman who is said to have spent time in Tucson’s Maiden Lane, a red light district.

With vintage furniture and unfinished concrete walls, the underground space has an upscale yet creepy vibe to it, though it’s nothing a couple of cocktails can’t fix. There are a few drinks on the menu, which change very frequently, but the Old Fashioned is rumored to be a regular. 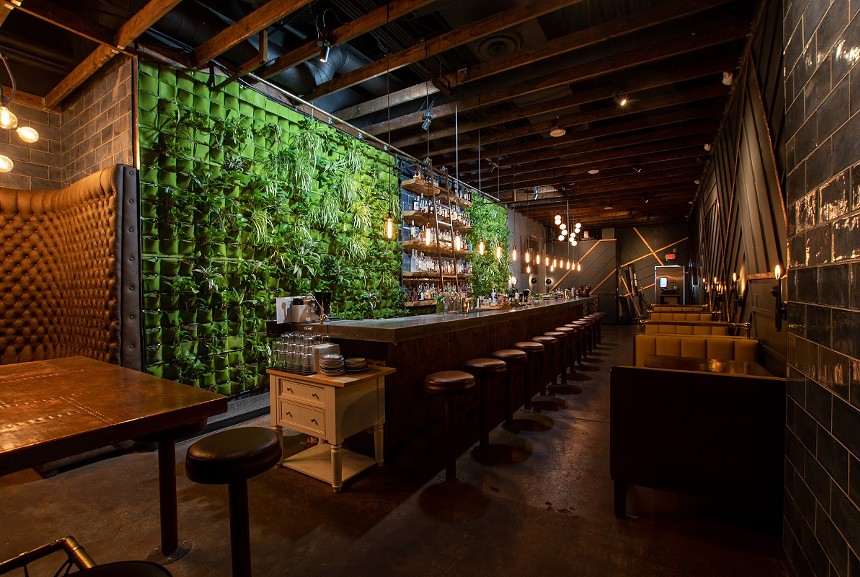 Pigtails is a hidden bar in the heart of downtown Phoenix.
Juntos Media

1 East Washington Street, Suite 128
602-675-4416
Mondays through Thursdays, 4 p.m. to midnight; Saturdays 2 p.m. to 2 a.m.; Sundays, 2 to 10 p.m.
At CityScape on Washington Street and Central Avenue, across from Urban Outfitters, one will find orange traffic barricades, stacks of two-by-fours, and workers donning hard hats. But don’t let the light rail construction deter you from Pigtails, a craft cocktail bar.

Entering into a raw bar with fresh oysters and jumbo shrimp makes you question if you've accidentally walked into a restaurant's back kitchen. But a neon red “Cocktails” sign reassures you're on the right path. The bright space then gives way to a dim room with black walls, tan leather-upholstered booths, and a bar framed by plants with spirits sitting atop curvy wooden shelves.

If you come with a group and are feeling adventurous, go for the Mystery Punch Bowl, which serves four to five. This place has plenty of cocktails, whether you’re in the mood for a Sweetz Cold Brew with your choice of spirit or an Eye of the Thai-ger with Dos Maderas Rum, Thai tea, Angostura Amaro, house coconut mix, vanilla, and lemon.

Instagram-worthy drinks are marked with the little camera logo, because they’re so pretty they’ll make your influencer “friends” jealous, like the Fresa Than a Muh Fucka, a vodka and strawberry drink topped with tiny strawberry seeds, or opt for something a bit more technically challenging, like the Femme Fatale, a smoked cocktail with Private Barrel Select Maker’s Mark, Creme de Noyaux, Lucano Amaro, salted caramel, and walnut.

The food menu is great for grazing, with familiar snacks like a charcuterie board, carnitas nachos, and a Caprese flatbread. Happy hour runs from 4 to 6 p.m. daily, with $10 drinks, $1 off raw bar items, and discounted snacks. 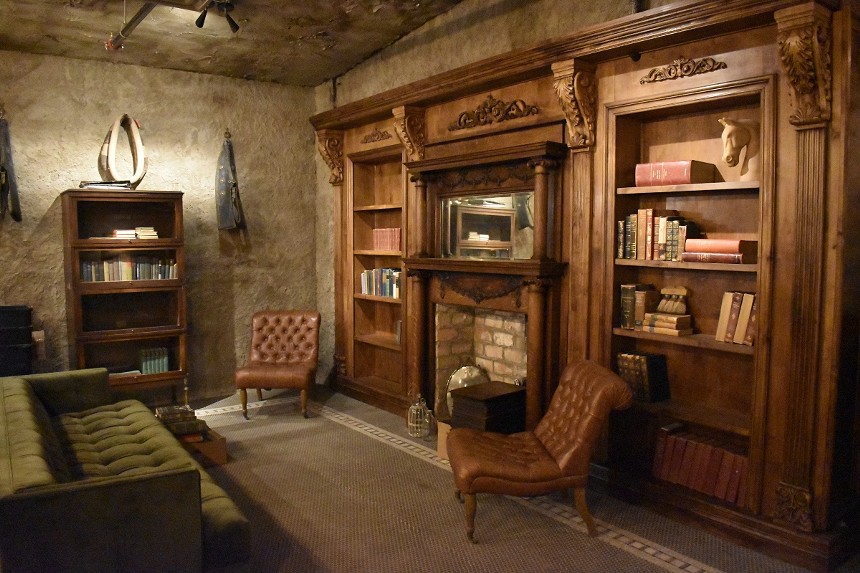 A lounge area with a hand-crafted fireplace and bookshelf at Rough Rider.
Devan Sauer

Enter the lobby from the east or north side of the modern building, then take the middle elevator down to the basement to be transported into the late 19th century in this Western-themed bar. The bar is an ode to former President Theodore Roosevelt, who governed from 1901 to 1909.

Before he became president, Roosevelt led the First U.S. Volunteer Cavalry, "a mix of troops ranging from Ivy League athletes to glee-club singers to Texas Rangers and Indians" who fought in Cuba in the Spanish-American War in 1898, according to the Library of Congress.

The volunteer group was the only one that saw combat during the war, earning the nickname "Rough Riders."

Reminders of their conquests can be found all over the restaurant, from pictures of Roosevelt to golden bullet casings inserted into the edge of the marble bar, wood paneling, dark leather, and plenty of whiskey.

Cocktails abound, with traditional recipes dating back to the 1800s like the Abuelita's Elixer with Plantation Fiji Rum, cinnamon Demerara, coconut, vanilla, and egg white, and cobbler-style drinks with house-made jams like the Treaty of Paris, made with a house sherry blend, blood orange vanilla jam, falernum, a Caribbean liqueur, and lemon.

But the food here is not to be missed either, with lots of options to fill you up. The Baked Crab Dip served with toasted Noble Bread is a nice starter, while the Veal Schnitzel, ten ounces of breaded veal loin chop topped with creamy mustard sauce and served with sauerkraut, should satisfy even the most substantial cravings. 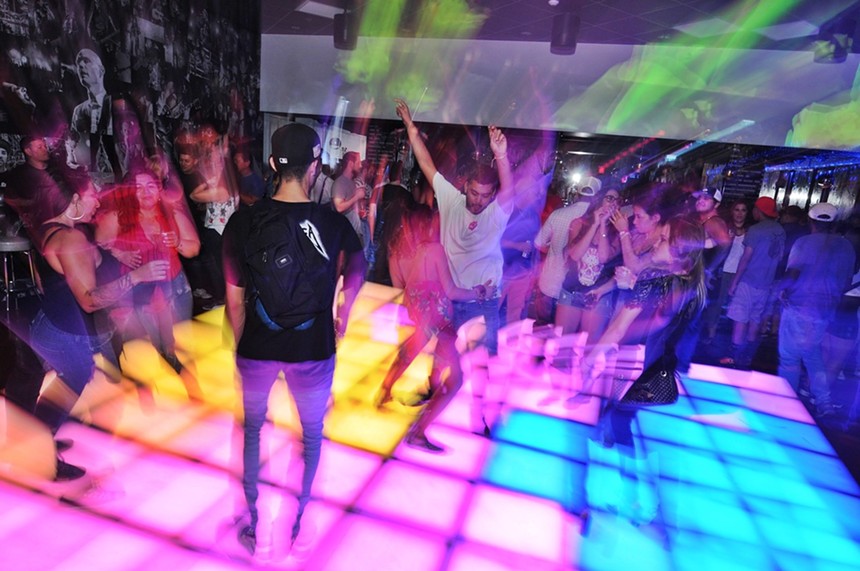 The dancefloor lights up at Stardust Pinbar.
Benjamin Leatherman

401 West Van Buren Street, Suite C
602-354-2931
Mondays through Thursdays, 5 p.m. to midnight; Fridays, 5 p.m. to 2 a.m., Saturdays, noon to 2 a.m.; Sundays, noon to midnight.
It's pizza in the front, party in the back at this hidden dance club. Enter Ziggy's Magic Pizza Shop, a tan building with striped awnings at Fifth Avenue and Van Buren Street, and grab a couple of slices.

Pepperoni and cheese are regulars, while the pizza of the week ranges from selections like the Rude and Sexy, with pepperoni cups, grilled chicken, spinach, pineapple, and mozzarella, to the Touch of Bourbon with Bourbon beef, sauteed peppers, onions, and mushrooms, cheddar, and ricotta, topped with spicy sauce.

Saunter past the yellow-tiled pizza counter, slices in hand, to a pair of swing doors that give way to a steel door with a latch. Open it and find yourself inside Stardust Pinbar, a disco of days gone by, complete with a lit-up dance floor centered by a disco ball and surrounded by Deadpool and Star Wars-themed pinball machines.

The cocktails are sweet and colorful, like the Ziggy Pop, made with Stoli Cucumber Vodka, pineapple juice, raspberry Jolly Rancher simple syrup, and a Pop Rock rim, or the Bad Bunny, a mix of Captain Morgan coconut rum, hibiscus simple syrup, mango puree, and lime, rimmed with Tajin.

Sit atop a vintage upholstered stool or take to the dance floor as you lose yourself in this hidden galaxy. And if your stomach begins to grumble, more cheesy slices are just a few steps away. 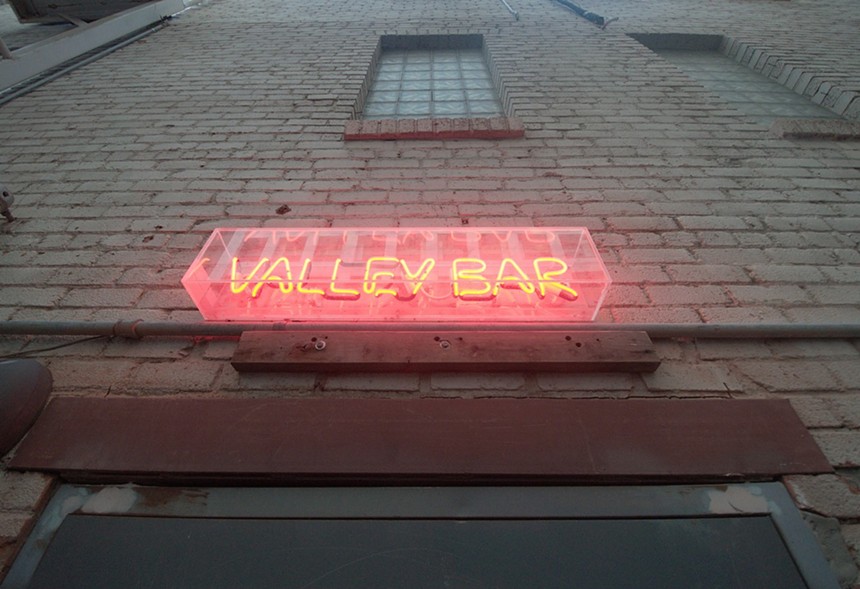 The entrance to Valley Bar in downtown Phoenix.
Benjamin Leatherman

The bar is located on Central Avenue in an alley between Adams and Monroe Streets. You'll pass a few dumpsters and parked cars before coming to the entrance, a door embedded in a white brick wall with a small neon sign above it that reads "Valley Bar" in all caps.

Descend down the stairs into the popular space inspired by Winnie Ruth Judd, a Phoenix medical secretary who murdered two of her friends, dismembered their bodies and stuffed them in trunks, then boarded a train for Los Angeles in 1931. When she arrived, police asked Judd to open her trunks, citing a terrible smell. She was eventually convicted of murder at the Maricopa County Courthouse.

A mobile spinning above the bar tells Judd's horrific story through small cutouts of a train, dismembered body parts, and prison bars, illuminated by lights that cast creepy shadows over the yellow walls.

True crime aside, Valley Bar is a fun spot to listen to your favorite band or DJ, play billiards with some friends, or sip on an Arizona-inspired cocktail.

The Yassamin-i Martini, made with Borghetti Caffe liqueur, Singani 63 Brandy, and nitro cold brew is an ode to Phoenix City Councilwoman Yassamin Ansari, while the That's a Ducey is a nod to the governor, made with Angostura Bitters, cinnamon, Tawny Port, Four Roses Bourbon, and lemon juice.

Bites from Crescent Ballroom's Cocina 10 are also on the menu, from guacamole to a cheese quesadilla or carne asada burrito. Just don't let the murderous tales ruin your appetite.
KEEP PHOENIX NEW TIMES FREE... Since we started Phoenix New Times, it has been defined as the free, independent voice of Phoenix, and we'd like to keep it that way. With local media under siege, it's more important than ever for us to rally support behind funding our local journalism. You can help by participating in our "I Support" program, allowing us to keep offering readers access to our incisive coverage of local news, food and culture with no paywalls.
Make a one-time donation today for as little as $1.