Meet the Baker Behind Phoenix's Most Instagrammable Pastries 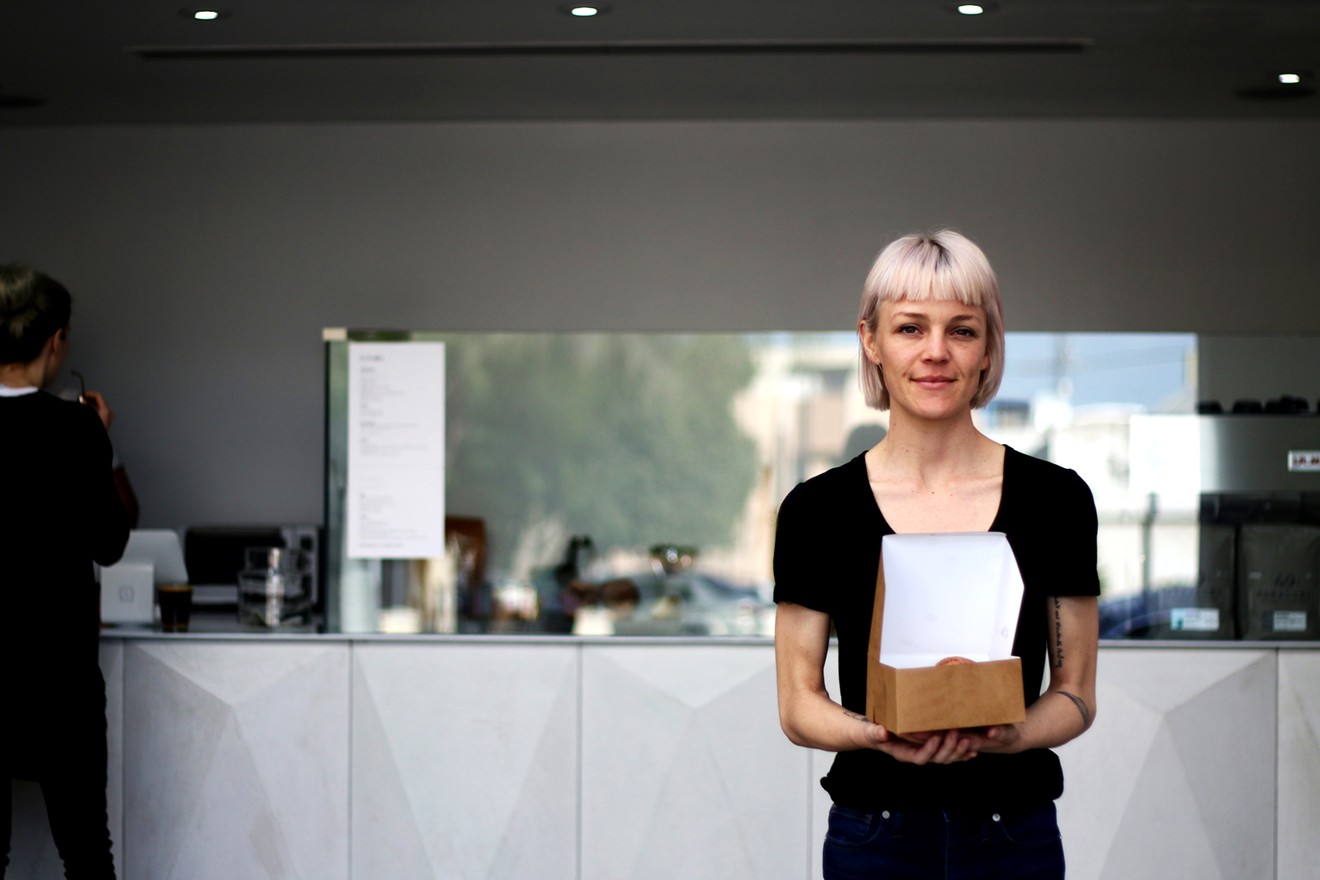 Meet Olivia Girard, the creator of Le Dinersaur. Evie Carpenter
It’s 8 on a Saturday morning, and Olivia Girard has already been up for seven hours. She walks into white-walled, minimalist Futuro in downtown Phoenix just as the barista opens the coffee shop’s doors.

Her arms are full of colorful trays and brown paper boxes that she brought from home. Her boyfriend, John, follows close behind, also with arms full.

Girard washes her hands and begins placing geometric and diamond-shaped pastries behind Futuro’s display window. She precisely places each of the adorable, barely glazed shortbreads, the towering churrovers, and pistachio-decorated cubes of cake in rows as customers overwhelm the small space, pointing at Girard’s creations.

They’ve probably seen photos of the baked goods on Instagram. They may not know Girards’s name but they likely do know those cakes and cookies were made by Le Dinersaur.

The diamond-shaped shortbreads are one of Le Dinersaur's most popular pastries.
Evie Carpenter
Though Girard has been in the restaurant industry in some way or another since she was a teenager, the 28-year-old has only been teaching herself how to bake seriously for a few years.

It all started with bread … and a printing press.

After her attempts at getting a printing press fell through, Girard found herself with an excess of creative energy.

“I just go nuts if I’m not making anything, so I started making bread,” she says.

She credits her experience going from the kitchen of a retirement home to the ones in Roka Akor, the Windsor, and Ollie Vaughn’s to giving her the background she needed to create Le Dinersaur.

Le Dinersaur provides the pastries to Futuro in downtown Phoenix.
Evie Carpenter
But it wasn’t long before she was baking things for her friends and bringing them lunches on her days off. In January 2016, Girard decided to share her talents beyond her personal circle and launch Le Dinersaur.

The lifelong dinosaur fan started her business by delivering individual lunch boxes including a sandwich, chips, and cookie to people who would text or e-mail their orders in the day before.

“There’s definitely a lot of trial and error, but I feel like that gets less and less as you get to know the product,” Girard says.

Now, she can deliver up to 200 lunches per week, and instead of individuals ordering their personal meals, entire offices will call on Girard to cater their lunches and events. She still delivers every one herself.

When Girard started baking, she never saw herself baking pastries, but then Jorge Ignacio Torres of Futuro approached her and asked if she’d be willing to make some things for the coffee shop. So, she decided to give it a shot.

“I do really enjoy [the pastries], more than I thought I would,” Girard says.

“I’m just so attracted to process,” Girard says. “There’s all these teeny-tiny things you can do and the end product is totally different.”

Plus, she’s always been more inspired by savory flavors over sweet ones. That’s why you’ll often find herbs in her shortbread cookies and cakes.

Between batches of baked doughnuts and venturing beyond midday meals, Girard is trying to figure out her next steps.

Futuro customers choose among Le Dinersaur's pastries.
Evie Carpenter
She plans to stay true to the kind of grassroots, underground profile she's kept so far in Le Dinersaur’s life, so don’t expect a storefront or sit-down restaurant. But keep an eye out for a possible permanent spot or maybe an investment in a building in the warehouse district for catering and events.

Until then, she encourages people to try her creations with an open mind.

“I hate when someone won’t try something. What’s the worst that’ll happen?” Girard says. “But then they try it and enjoy it and I love that.”