New Penny Café is the first venture together for Queendom Concepts owners, from left, Laura Hansen, Brittany Salazar, and Deni Banach. Sara Crocker
The women behind two Goodyear favorites have teamed up to bring a new cafe to the West Valley.

The new concept is currently in a soft-opening phase with limited hours and menu options. But with their new cafe, which will serve breakfast, brunch, lunch, coffee, and cocktails, the owners aim to combine the best of the coffee shop and gastropub.

“We are doing a lot of fun, creative things at both locations and melding them into this,” Banach says. “We’re taking things that we love from everything that we do and we’re making it a new baby over here.”

One of the essential elements of the new business is paying close attention to quality and scratch cooking, the owners agree.

“It’s just better,” Banach says. “People recognize that and can taste that.” 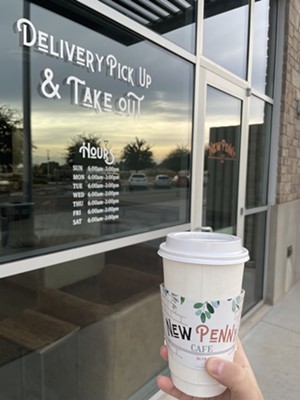 Coffee and tea join Instagramable lotus energy drinks on the menu at New Penny Café.
Sara Crocker
The menu will center on smoothie bowls, breakfast sandwiches, burritos, biscuits and gravy, plus salads and sandwiches for the afternoon. For those who can’t choose between sweet or savory, there’s the Split Personality which comes with one biscuit with sausage gravy and another topped with butter, jam, and whipped cream.

Classic coffees and tea join espresso drinks jazzed-up with house-made syrups, like Mojave vanilla bean, and bright, Instagramable lotus energy drinks. Saddle Mountain beers and morning cocktails will be among the adult beverages, as well as flights of Champagne and coffee.

Kids menu items are also on the menu, like Fairy Toast – cinnamon and sugar toast with sprinkles – and an orange creamsicle drink made with a blend of orange juice and vanilla bean syrup.

Banach and Salazar met Hansen through an only-in-Arizona kind of meet-cute. The Enroute owners were in need of a more powerful ice machine. Hansen had just bought a second machine and had plenty of ice, so she invited them to help themselves when they needed it. As they continued to make trips across the parking lot over the next year, the trio's friendly relationship blossomed.

“That started our friendship – over ice,” Salazar says. She and Banach, who purchased Enroute in 2019, would often bounce business questions off of Hansen, and the Saddle Mountain owner was immediately impressed by the pair.

“They are two of the hardest working women I have had the pleasure of meeting,” she says. New Penny Café proprietors Deni Banach, Brittany Salazar, and Laura Hansen met in Goodyear where their other businesses, Enroute Coffee and Tea House and Saddle Mountain Brewing Co., share a parking lot.
Sara Crocker
Then, the business owners were separately approached by Avondale about opening an eatery there. Salazar and Banach were looking to spread their wings.

“We loved their focus on small business,” Salazar says. “Deni and I have always dreamed of doing more than just coffee.”


Hansen, meanwhile, had always wanted to open a breakfast spot. With that, Queendom Concepts was born.

“We all have our own strengths and I think that’s what we love so much about this partnership is we all bring different things to the table,” Banach says. New Penny Café, a new concept from the owners of Enroute Coffee and Tea House and Saddle Mountain Brewing Co., is now open in Avondale.
Sara Crocker
Located in a large, airy corner of The BLVD, a mixed-use shopping, living, and retail district steps from the American Sports Centers complex, the New Penny space is organic and modern. Concrete floors and subway tiles are warmed up with copper and navy accents and canned lighting.

The cafe will be counter service, with plenty of seating for diners that spills onto an L-shaped patio with bright yellow canopies, along with a lounge space envisioned for those who are imbibing or looking for a quieter spot for a meeting or work.

New Penny will open next to Tap2, a taproom from the owners of Tap Savvy, and the forthcoming drinks shop Soda Bomb.

In addition to food, New Penny will have a shopping space featuring local artisans and vendors – something Banach and Salazar also have at Enroute.

“We’re of, for, and about the community in every way possible,” Banach says.

The opening has been a long time coming as delays and challenges have pushed back the opening over a year. But, the trio says they are excited to finally share New Penny with the community, and hope the new concept might be the first of more to come.

“We would like to, with the knowledge we’re taking from this one, do it again,” Hansen says.

735 North 114th Avenue, Avondale
623-249-4192
6 a.m. to 3 p.m. daily
KEEP PHOENIX NEW TIMES FREE... Since we started Phoenix New Times, it has been defined as the free, independent voice of Phoenix, and we'd like to keep it that way. With local media under siege, it's more important than ever for us to rally support behind funding our local journalism. You can help by participating in our "I Support" program, allowing us to keep offering readers access to our incisive coverage of local news, food and culture with no paywalls.
Make a one-time donation today for as little as $1.
Sara Crocker is a freelance writer who has called Phoenix home since 2020. Her work has appeared in The Denver Post, Colorado Life Magazine, and Phoenix Home & Garden.
Contact: Sara Crocker
Follow:
Twitter: @saraccrocker
Instagram: @crockertherocker