Cool down with a cold one at Four Peaks Oktoberfest. Alexandra Gaspar
Fall is here, and for beer fans, that means only one thing. It's Oktoberfest season. So put on your lederhosen, warm up your arms for those stein-holding contests, and work up an appetite for plenty of German food. We've got celebrations happening all around the Valley.

From Chandler to Wickenburg, and  Scottsdale to Glendale, here are six Oktoberfest events not to miss this fall. Prost!

Dr. A.J. Chandler Park
178 East Commonwealth Avenue, Chandler
October 1
Two favorite local breweries, Pedal Haus Brewery and SanTan Brewing Co., are forming a dynamic duo to host an epic 2022 Downtown Chandler Oktoberfest. At Dr. A.J. Chandler Park, the breweries will serve German-style brews and food, such as Bavarian pretzels and brats. There will be live music all day, and Julian Wright, founder and CEO of Pedal Haus Brewery, will emcee stein holding and sausage eating competitions. Tickets cost $15 in advance, or $20 at the door and the event runs from 3 to 11 p.m.

3622 North Scottsdale Road, Scottsdale
480-947-4006
October 1
Old Town Scottsdale restaurant and patio Brat Haus is hosting its annual Oktoberfest celebration on the first of the month this year. The event runs from noon until 8 p.m., with two stein holding competitions happening at 3 and 6 p.m. The stakes are high in these cup-holding contests, as the winners will be invited to participate in the Arizona Stein Holding Competition at the Four Peaks Oktoberfest celebration at Tempe Town Lake on October 9. There will be live music, games, prizes, and of course, plenty of beer. Admission costs $5, and those dressed in festive gear can receive $1 off a Four Peaks Oktoberfest pour. 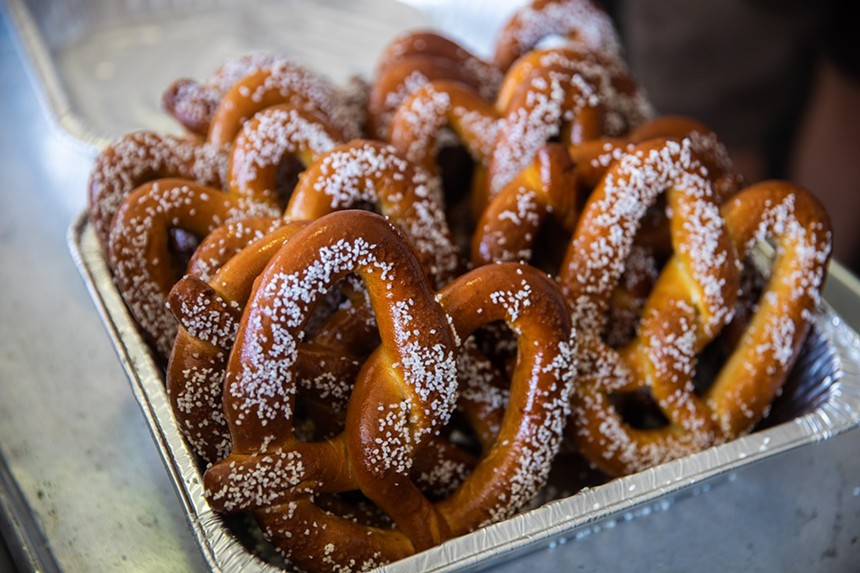 Everyone loves pretzels, especially at the Oktoberfest in Tempe.
Jacob Tyler Dunn

Tempe Beach Park
80 West Rio Salado Pkwy, Tempe
October 7-9
Tempe Town Lake is always a location for shenanigans, and this October it welcomes back Four Peaks Oktoberfest for its 49th year. The three-day festival includes live music, new carnival rides, a Weiner dog fashion show, and a "Runnin’ for Brats" race. Plus, of course, delicious food and drinks. New on the menu this year are chicken and vegetarian empanadas. Proceeds from Oktoberfest benefit Tempe Sister Cities, a non-profit that works to send Tempe high school students to ten cities around the globe. Admission is $20 on Friday and Saturday, and free for attendees on Sunday. Those under 21 get free entrance all weekend.

Get yourself a schnitzel and some bottled bier at Haus Murphy's.
Lauren Cusimano

5739 West Glendale Avenue, Glendale
623-939-2480
October 14-15, 21-22, 28-29
There's no better place to celebrate Oktoberfest in the Valley than Glendale's classic German restaurant, Haus Murphy's. German-style food and drinks abound at this West Valley spot all year long, but for three weekends in October, the fun gets dialed up a notch. Listen to live music, taste seasonal imported German beers, and take in the sights and sounds of Germany from this Glendale biergarten. The celebrations take place on Friday and Saturday evenings from 5 to 9 p.m. and reservations, made by phone, are recommended.

The Westin Kierland Resort
October 15
While Oktoberfest typically celebrates German culture, music, and food, this new event is taking a decidedly different approach. The Westin Kierland Resort in Scottsdale is hosting OktoberWest, a country western-themed event complete with country music performances, line dances, a mechanical bull, and a bourbon-tasting garden. Beer will also be available along with snacks from local food trucks. Performers for the evening include Ashley Wineland, Mogollon Band, Donny Grubb, and fiddle player Patrick Clark. The event kicks off at 4 p.m. and ends at 10 p.m. Tickets cost $45 and are available online. Proceeds benefit Phoenix-based nonprofit Friends of Freedom.
KEEP PHOENIX NEW TIMES FREE... Since we started Phoenix New Times, it has been defined as the free, independent voice of Phoenix, and we'd like to keep it that way. With local media under siege, it's more important than ever for us to rally support behind funding our local journalism. You can help by participating in our "I Support" program, allowing us to keep offering readers access to our incisive coverage of local news, food and culture with no paywalls.
Make a one-time donation today for as little as $1. 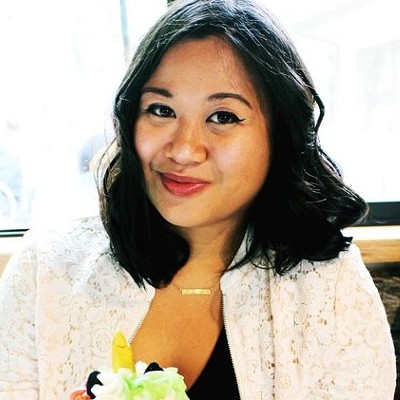