Chef Sasha Raj talks about the Arizona voice, the new era of Phoenix food, and the inspiring chef, Charleen Badman. Sasha Raj
“I hope the chai is okay,” says Sasha Raj, owner and chef of the south Tempe’s vegan staple, 24 Carrots Natural Café & Urban Juicery. The chai is excellent — worth drinking hot even in 100-plus degree weather. “We actually bring the spices from India as often as we can. I have my parents and in-laws spice mule-ing,” Raj says, laughing.

While in college, Raj worked at a juice bar serving smoothies made from canned fruits, juice concentrates, and a suspicious, non-dairy frozen yogurt slurry. This obviously had an impact, as the first 24 Carrot offerings were smoothies and juices made from whole ingredients Raj could list with integrity. This was 2008, when the concept of drinking fresh-pressed kale juice was completely foreign to most people.

Today, 24 Carrots is a full-service kitchen, bakery, and safe haven for people with food allergies, sensitivities, and diet restrictions. It serves breakfast, lunch, and dinner from a 100-percent vegan menu. Though the chai spices come from far away, the produce comes from local vendors. This Tempe cafe blazed the trail for comforting, nutritive food in greater Phoenix. 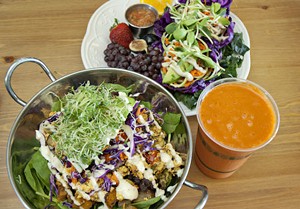 Example of an offering from 24 Carrots, Sasha Raj's Tempe restaurant.
Jackie Mercandetti
But the next wave of innovation for restaurants, Raj says, is social and environmental consciousness.

When trendy food publications make routine rounds to compile “hot, new” lists or curate city dining guides (or record podcast episodes, in this case), it feels like Phoenix usually gets skipped over. This year, however, FnB chef Charleen Badman’s new James Beard Award for Best Chef Southwest may have Arizona looking like less of an ugly duckling.

“That’s the first thing [Badman] said when she got on stage — ‘Arizona.’ And it’s true,” says Raj, referring to Badman's award acceptance speech. “Hopefully the world will be ready to hear that.”

Raj has her theories on why the Phoenix food scene isn’t seen as a national player. It’s a city built with grid-like master community designs in mind, she says, which made it a corporate playground. And that’s the reputation that has stuck. However, the 2007 economic crash shook everything up; an influx of people from coastal cities combined with ultra-low commercial real estate prices introduced new demands and opportunities for creative food across many metro cities.

“I think part of what the nation as a whole doesn’t understand is that as Phoenix’s population has increased, and as its community densities have increased, we’ve developed our pockets, and our niches, and our hole-in-the-walls, and our not-so-hole-in-the-walls. We found our Arizona voice,” says Raj. “The face of Phoenix as well has become culturally diverse, and with that comes really interesting food.”

And women like Raj are at the forefront of all of it. Enter: Cherry Bombe, a biannual magazine and weekly podcast all about the female leaders of food. On June 25, Raj joined chef Badman and Talavera chef de cuisine Samantha Sanz to discuss the future of food in Phoenix. 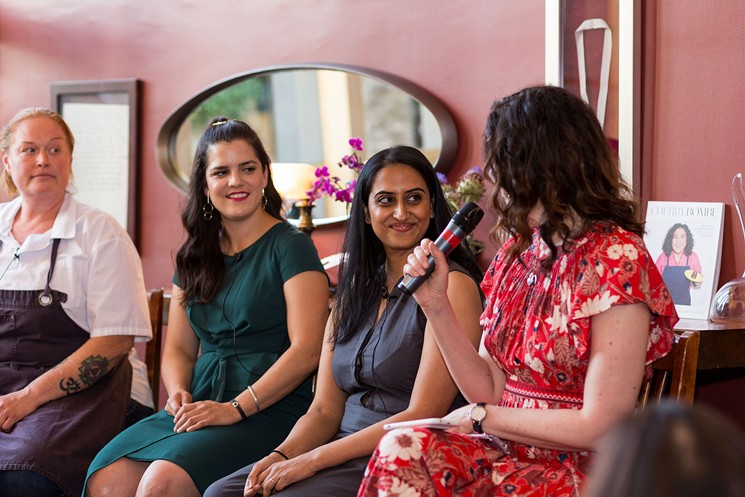 Sasha Raj of 24 Carrots (middle right) on an episode of Radio Cherry Bombe podcast with Samantha Sanz of Talavera (middle left) and Charleen Badman of FnB (left).
Taylor Jade Photography
This was orchestrated for the Cherry Bombe Food for Thought tour.The conversation was recorded in front of a live audience for an episode of the magazine’s podcast, Radio Cherry Bombe, during the  stop at Scottsdale's FnB Restaurant. (As of press time, the episode has not yet been released.)

The most valuable part of the evening for Raj, she says, was the discussion on how to lead one’s kitchen, and by proxy, the restaurant industry.

At one point, each woman was asked to describe her leadership style in one word. Raj’s word was “tenacious,” Sanz’s was “determined,” and Badman’s was, “nurturer.” You can also read our full review of the evening.

“I do think that any woman entrepreneur needs all three,” Raj says. “You have to be very tenacious. You have to have vision. And then you have to be willing to nurture the people along with you, to be able to not just evangelize that vision, but also to become an actual force of good within your community.”

To that end, Raj says Badman has been a prime example for her. 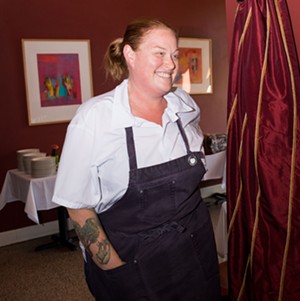 “She’s a giver," Raj says of the award-winning FnB chef, Charleen Badman.
Taylor Jade Photography
“She’s a giver. She is continuously perfecting the way to give, and that’s something that really speaks to me and is a path that I would be privileged to follow. I love her so much,” Raj says. “I really appreciated [the Cherry Bombe] opportunity. It wouldn’t have happened if it weren’t for Charleen helping to nurture other voices in her community.”

To further the spirit of nurturing in the Phoenix food community, Raj, Badman, and chef Danielle Leoni of the Breadfruit (chosen by the James Beard Foundation as a 2018 fellow for the group's Women's Entrepreneurial Leadership program) are teaching a workshop. The James Beard Foundation-led event, "Owning It," will be held from 9 a.m. to 5 p.m. on Monday, September 23.

The workshop will guide female-identifying business owners, as well as aspiring business owners, in hospitality through some of the industry's nitty gritty — including honing vision and crafting a pitch. Interested candidates can apply online. The deadline is Monday, September 9.

And for more information on Raj, visit the 24 Carrots website.
KEEP PHOENIX NEW TIMES FREE... Since we started Phoenix New Times, it has been defined as the free, independent voice of Phoenix, and we'd like to keep it that way. With local media under siege, it's more important than ever for us to rally support behind funding our local journalism. You can help by participating in our "I Support" program, allowing us to keep offering readers access to our incisive coverage of local news, food and culture with no paywalls.
Make a one-time donation today for as little as $1.