Some of the World's Best Chocolate Is Made in Scottsdale

Shipler and McCaslin moved from Texas and North Carolina, respectively, to attend Arizona State University. They met while working at the now-closed Bread Basket in Mesa and selling baked goods at local farmers’ markets. The two decided to start their own business in 2012 as a farmers' market vendor selling raw nutrition bars, kale chips, stone-ground nut butter, and chocolate. The first few weeks of Stone Grindz were sold-out successful.

But one morning, the fun suddenly ended.

McCaslin says a customer brought back a bar of chocolate and said, "Your chocolate is shit. It crumbled apart and tasted like garbage and I had to throw it away." He wanted his money back.

“I kind of have him to thank,” says McCaslin, who speaks in a grounded and calm way (and is always ready to answer any questions about chocolate). “Once I gave him the refund, I resolved to go home, learn how to temper chocolate, and experiment with roasting cacao.”

Tempering is the process of melting and then cooling chocolate at certain temperatures that then allow it to be shaped. Without tempering, the chocolate has no shine and tends to soften at room temperature.

The new business partners agreed to focus on only one product: chocolate. They began researching and testing, spending four years experimenting with roasting profiles. “Steven has an uncanny ability to delve deeply into any subject,” says McCaslin.

And things eventually picked up. 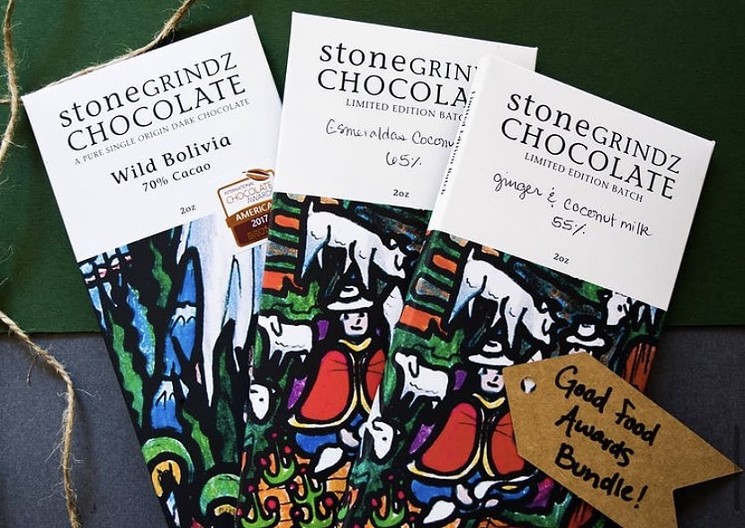 Some award-winning bars.
Stone Grindz Chocolate
Finally, in 2019, they won their third Good Food Award along with 10 International Chocolate Awards. This included two gold medals at the world competition level in Italy, which named Stone Grindz's Ucayali River, Peru, and Suntory Whiskey & Asian Pear Caramels as the best chocolates on the planet in their respective categories.

All this magic happened in a (certified) apartment kitchen with some tiny grinders and a few cardboard boxes used to trap heat for conching the chocolate at 160 degrees Fahrenheit. (Conching is the process of mixing cocoa solids with sugar and milk powder until the particles get smaller in size and the mixture liquefies. It allows the chocolatier to pour the chocolate into molds.)

The two have released videos if you're interested in getting a glimpse of the process. For Shilper and McCaslin, chocolate is about artistic expression as well as a sense of community. Chocolate to Shipler is, “integrity, honesty, art, expression, beauty, color, texture, and aroma," he says. "Chocolate to me is an absolute obsession.”

“Our chocolate philosophy is simple,” McCaslin says. “Quality first. We are trying to make chocolate the absolute most pleasurable way we can, and leave as small of a footprint as possible. Also, fair-trade, ethically sourced, premium-priced cacao is really important to us.”

All products are also vegan and free of soy, dairy, and gluten. And unlike most commercial chocolates, which are a blend of cacao beans, Stone Grindz’s beans are single-origin, heirloom, and organic. This is impressive to people who know chocolate because, with single-source beans, there’s nowhere to hide. No blending can “fix” the flavor. Chocolatiers must use only their skillset. The flavor comes from roasting and conching.

Stone Grindz’s beans go through more than 25 test roasts to find the best representation of a particular bean. Its roasting is also a lesson in patience. The beans roast at lower temperatures for a longer time to produce the depth of flavor.

Stone Grindz partnered with local artist Joe Mehl for their wrapper designs, which are easily spotted by their explosive use of multiple colors. Mehl found inspiration for this from traditional South American art, a reference to where the beans come from (Peru, Ecuador, and Bolivia).

After all this — years of practice, worldwide fame, and stunning wrappers — Stone Grindz is still quite accessible. Its chocolate bars and bonbons (which change seasonally) are available online, or at Whole Foods and AJ’s Food Foods. But, as before, you can also find Stone Grindz at the Uptown, Old Town Scottsdale, and Gilbert farmers’ markets.

And if you can’t decide what to buy, have a conversation with McCaslin. She’ll find your perfect bar.
KEEP PHOENIX NEW TIMES FREE... Since we started Phoenix New Times, it has been defined as the free, independent voice of Phoenix, and we'd like to keep it that way. With local media under siege, it's more important than ever for us to rally support behind funding our local journalism. You can help by participating in our "I Support" program, allowing us to keep offering readers access to our incisive coverage of local news, food and culture with no paywalls.
Make a one-time donation today for as little as $1.