Upon entering, customers look up at the menu printed on white banners tacked to the walls. Of the five taco-filling options, there’s the familiar pollo, carne asada, and al pastor. The last two on the list are, like the restaurant itself, newcomers to the downtown Tempe Mexican food scene. Not many pick nopales, which is grilled cactus or cabeza, pulled beef cheek.

Over the next hour, hungry patrons monopolize the dozen or so tables, seeking satiation in soft corn tortillas topped with chicken, steak or marinated pork. But there were zero takers for the pulled beef cheek that’s seasoned with Calalfia’s secret blend and lovingly braised for six hours until melt-in-your-mouth tender.

That was, however, until Cade Solito ended the streak. Solito’s office is a five-minute walk from Calafia and he's quickly become a regular. After a co-worker, who had tried cabeza elsewhere, vouched for it Solito placed an order for his first ever cabeza.

“I saw it was different and unique. I’ve had the chicken and steak tacos here and they were some of the best tacos I’ve ever had so I’m definitely excited to try the cheek,” says Solito, a lender by day and Old Town Scottsdale DJ by night.

So far, the cheek was batting 1-for-50-ish. Downtown Tempe has seen its share of head shops. But for many students and newcomers to the Valley's rich Mexican food scene, a head taco is a first.

This spot is unusual for Mill Avenue, an area crammed with student bars serving mainstream menus. Sure, there are tacos, but they usually come with a side of sour cream and a giant margarita. 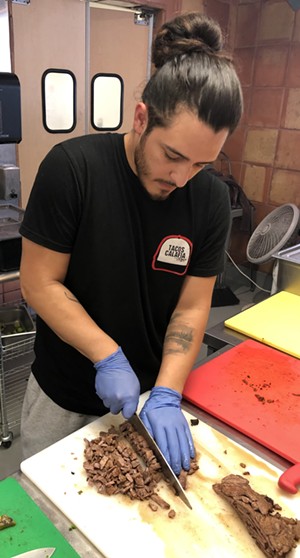 Christian Vasquez slices carne asada at Tacos Calafia. The downtown Tempe taco shop draws a business crowd during the day and a college and bar crowd on weekend nights.
Georgann Yara
In July, Tacos Calafia Tempe franchisees Celeste Lopez and her husband Christian Vasquez quietly opened their restaurant on Mill Avenue and Fourth Street. Lopez was pregnant with the couple’s second child, who is now 5-months-old, when they acquired the coveted street level corner space and started renovations.

It’s the seventh Calafia location in the Valley and one of two in the East Valley. The company began as a food truck churning out the recipes founder Adolfo Torres grew up with at his parents’ taqueria in Tijuana.

Those recipes mean tacos emerge fresh from the kitchen, with plain meat or nopales atop a soft corn tortilla. They also mean no sour cream. No lettuce. No rice. And there's not a hard shell on the premises. Occasionally, Lopez has to break the news to first-timers requesting one or all of these.

“They do get a little bummed when they find out we don’t have lettuce or sour cream, but that’s Americanized stuff that has been added. It’s not a thing with tacos served in Tijuana,” Lopez says.

Instead, there's a complimentary salsa bar where customers can customize their orders with mild, hot and very hot sauces along with onions, cilantro and radishes. There’s also guacamole, a practically unheard of freebie. A stainless steel hot box on the pickup counter contains grilled jalapenos and onions.

If someone wants the crunch of a hardshell taco, Lopez points them to the vampiro, a fried corn tortilla topped with cheese and a choice of meat or nopales.

Other off-menu secrets include the option to get tacos “naked,” Calafia’s take on the keto version with melted cheese playing the part of the tortilla. Ask for a cup of consome, the juices yielded from the beef cheek as it’s cooking, and use it as a savory dipper or drizzle to add even more oomph.

Many Spanish words have become so much a part of the English vernacular, they need no translation. Most customers know “cabeza” means “head.” While it’s technically the cheek of the cow, this can be tough to get past.

“They see the word ‘cabeza,’ and at first they’re kind of freaked out,” Lopez says. “But then we explain what it is.”

Sometimes it takes a sample to fully convince customers. This is also true for the nopales.

Like Solito, employees of nearby businesses within walking distance composed most of the lunch crowd on this day. When asked why they didn’t order the nopales or cabezas, some said they came in knowing what they wanted. Others didn’t notice those on the menu. A few candidly admitted they weren’t as “adventurous.”

Ken Gutierrez walked over from his office for lunch. When picking up his chicken quesadilla and al pastor taco, he walked up to the hot box and grabbed a couple of grilled jalapenos, an indication he’d been here before.

Gutierrez has tried the cabezas at Calafia and says it was one of the better ones he’s had. While he thinks it may take a while for the idea of dining on cheek and cactus to be embraced by the Mill Avenue masses, he was optimistic that an authentic taco shop can find an audience in Sun Devil Country.

“Especially the nopales. I feel like people around here are vegan so that’s a good alternative for them,” he says. “It should fit in well.”

Lopez has served many vegetarians and vegans who come in with meat-eating pals and assume there’ll be nothing for them, she says. They’re hesitant at first, but after a taste they’re all in.

Like the young woman who came in late on a Saturday night with girlfriends after a bachelorette party at the club above Calafia. Lopez offered the non-meat eater the nopales. The woman returned the next weekend and ordered 10 nopales tacos. She came a third time and got them with beans, making a heartier vegan dish.

Calafia has distinct audiences, the business lunch crowd by day, the bar crowd on weekend nights. Unlike the chain's other locations, this one relies solely on heavy foot traffic in the area and passersby whose curiosity draws them in.

Lopez and Vasquez took this into consideration when deciding to open their shop in a college town and made adjustments to accommodate their demographic.

It’s the only Calafia location that offers beer on tap in addition to bottled Modelo, Corona and Coors. On Friday and Saturday nights, it’s open til 3 a.m. to catch bar patrons craving something to soak up the alcohol after closing time. Tacos Calafia has two Reggaeton playlists on Spotify, one of which is specific to Tempe and skews younger.

“Students come in after the clubs. They know the songs and they sing along,” Lopez says.

“We want to be part of the ASU community,” Lopez says. “I’m glad we picked Tempe.” 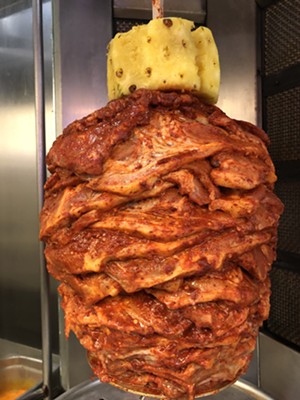 A trompo loaded with pastor rotates at Tacos Calafia in Tempe.
Georgann Yara
Calafia is a quick-service spot serving made-to-order dishes. It boasts the comforts of a restaurant with the vibe of a taco truck, which inspired the restaurant’s name. Calafia is the nickname for microbuses that transport tourists throughTijuana streets flanked with family-run street taco stands. No enchiladas. No posole. Only handmade tacos.

Beverages include margaritas, micheladas and Mexican Coke. Just behind the pickup counter, a tantalizing cone of pastor topped with a chunk of fresh pineapple revolves on a large vertical spit called a trompo. The no frills menu and casual, portable furnishings are intentional.

“We didn’t want to be too commercial. That’s why there’s no fancy tables, no fancy menus and there’s fold up chairs as if you were at a taco truck,” Lopez says.

“The cabeza tacos from Calafia were outstanding. They have this savory zest and fresh authentic taste that definitely makes it easy for me to say that these are my favorite tacos in Arizona,” Solito says after lunch. “It’s super refreshing to be able to enjoy a new spot on Mill with real authentic Tijuana-style food.”

Calafia Tempe's closest geographic competitors include Taco Bell Cantina and Colorado-based Illegal Pete’s. A block north is national chain Fuzzy’s Taco Shop, which moved out from the Calafia space a year ago.

Lopez says taking over a former taco joint invites comparisons despite the contrasting business models. She understands that Calafia challenges many people’s idea of Mexican food by introducing them to something new.

“People come here thinking we’re Fuzzy’s but they end up eating here because they want to try it,” Lopez says. “I think people like authentic tacos too.”

414 South Mill Avenue, Tempe
tacoscalafia.com
KEEP PHOENIX NEW TIMES FREE... Since we started Phoenix New Times, it has been defined as the free, independent voice of Phoenix, and we'd like to keep it that way. With local media under siege, it's more important than ever for us to rally support behind funding our local journalism. You can help by participating in our "I Support" program, allowing us to keep offering readers access to our incisive coverage of local news, food and culture with no paywalls.
Make a one-time donation today for as little as $1.
Georgann Yara is a freelance writer and former newspaper reporter who's also a proud equal opportunity eater. She loves all things Arizona, including the professional sports teams that continue to break her heart. Food, cocktails and cats dominate her IG.
Contact: Georgann Yara
Follow:
Twitter: @georgannyara
Instagram: @georganny/