Delux was one of many eateries that did not make it through the March-to-May shutdown. Lauren Cusimano
We don't have to tell you it was a chaotic year in the metro Phoenix food and drink world, because you were clearly paying attention. Meaning, you read a lot of our food and drink stories depicting as much.

Here are the 10 most-read stories covering the Valley food scene in 2020. A few stories were excluded, as they pertain to restaurants temporarily closing and/or reopening in the early pandemic days, but we still have some gems.

"Gone for Good: Phoenix Restaurants That Didn't Survive the Shutdown"

By Lauren Cusimano
Let's look back at the time span from March 17, when all restaurants and bars in Phoenix (and other cities in the metro area) were closed to the public, to May 31. During that window, a group of eateries did not make it. This was the first wave of Phoenix restaurants closing for good, and you can see a fully updated list of closures here.

Bars and breweries are offering booze to go across the Valley.
Thunderbird Lounge

By Lauren Cusimano
As you most likely already know, bars in Arizona were shuttered for an extended period of time (March 17 to this very day for some). But there were/are still ways to support your local watering holes. Here is a running list of Valley bars offering to-go booze, growlers, crowlers, cigarettes, food, and much more. Who's ready for some takeout? Well, you're going to have to be.
Sushi Roku Scottsdale

By Lauren Cusimano
On March 17, all dining areas in the city of Phoenix were closed to the public. A multitude of restaurants had to make the switch to takeout, curbside pickup, and delivery models — some eateries offering to-go orders and delivery options for the first time. As a result, we created the Phoenix Restaurant Directory, a guide to Valley-area restaurants shifting services (and many now offering dine-in with expansive safety precautions).

Chimichanga under a small mountain of sour cream.
Chris Malloy

By New Times Staff
Phoenix has great Mexican restaurants. That's no secret. But so many fly under the radar, not getting the attention or the love they deserve. Here, we share seven Mexican eateries that are something of hidden gems. The food these spots cook ranges from Sonoran to Oaxacan, tortas to mariscos, offbeat corn preparations like memela to the good old corn-tortilla taco.

King died from melanoma, a form of cancer, on April 4 at age 55.
CJ Communications, Inc.

By Lauren Cusimano
Restaurateur Patrick W. King, co-owner of Valley eateries like The Living Room, CHoP Steakhouse, and Rock Lobster, died from melanoma, a form of cancer, on April 4 at age 55. King started his career in the Phoenix restaurant industry with Mastro's Group at the classic Scottsdale steakhouse What's Your Beef. King is said to have assisted in opening and developing more than 70 restaurants.

By Lauren Cusimano
Sky-high plates of chicken and waffles in Youngtown. Crispy catfish po'boys in south Phoenix. Bites of Hoppin’ John that would transport you to the muggy outdoor cafe tables in the French Quarter. The Valley is lucky to have a wide variety of black-owned restaurants offering incredible food in vital spaces. We have many suggestions. Here is a running list of eateries and food ventures in greater Phoenix we recommend for today and well beyond. Many more ALDIs are on the way.
ALDI

By Lauren Cusimano
ALDI is in the midst of something like a westward expansion. This summer, the discount grocery store chain said it will open 70 new locations in 2020. Part of that growth includes setting up shop in Arizona, its 37th state. Four new ALDI stores were announced for the metro Phoenix area — two in the west Valley, two in the east — by the end of 2020. And yes, the Goodyear and Chandler locations have already opened. 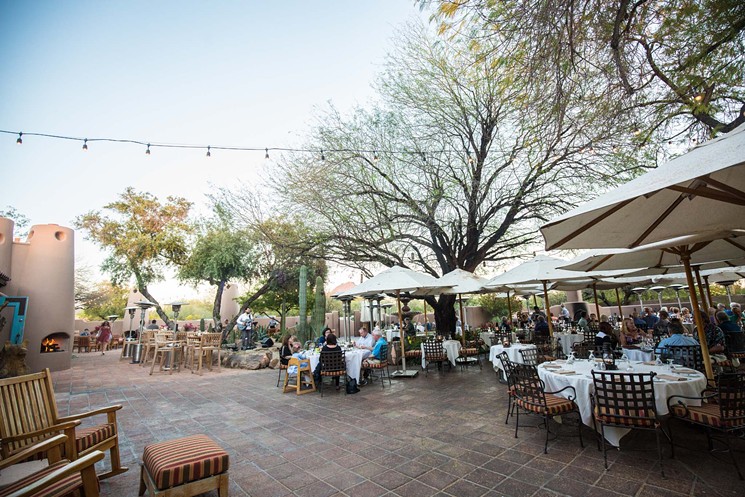 A wide shot of the huge area at Lon's — there's more space outside than inside.
Jacob Tyler Dunn

"The 15 Best Restaurant Patios for Outdoor Dining in Metro Phoenix"

By New Times Staff
Al fresco dining is having its best year ever, for obvious reasons. And if you're hoping to enjoy a meal in an atmosphere consisting of a breeze, maybe some umbrellas and festive lights, and light chatter, we have some recommendations. We suggest hitting the patios of these 15 eateries in metro Phoenix.

Your guide to downtown dining and drinking.
Lauren Cusimano

"Dining Guide: Where to Eat and Drink in Downtown Phoenix"

By Natasha Yee
At first glance, you might think there are only a few spots to enjoy a nice coffee, bite to eat, sip of vino in downtown Phoenix. But think of the center of the city as an onion; all you need to do is peel back the layers. We'll even peel it for you. Enjoy our rundown of where to get it all — from morning brews to breakfast, lunch, afternoon pick-me-ups, dinner, and late-night eats.

By Chris Malloy
Cecelia Miller, who founded Fry Bread House in 1992 and ran it until the mid-2010s, died in May after a long, non-COVID-related illness. She was 81. For decades, her eatery has been a pillar of indigenous food in Phoenix and a jewel in Arizona’s restaurant scene. As proof, Fry Bread House won a James Beard Award, the highest honor in American food, in 2012.
KEEP PHOENIX NEW TIMES FREE... Since we started Phoenix New Times, it has been defined as the free, independent voice of Phoenix, and we'd like to keep it that way. With local media under siege, it's more important than ever for us to rally support behind funding our local journalism. You can help by participating in our "I Support" program, allowing us to keep offering readers access to our incisive coverage of local news, food and culture with no paywalls.
Make a one-time donation today for as little as $1.