Everything You Need to Know About Phoenix Lights 2018 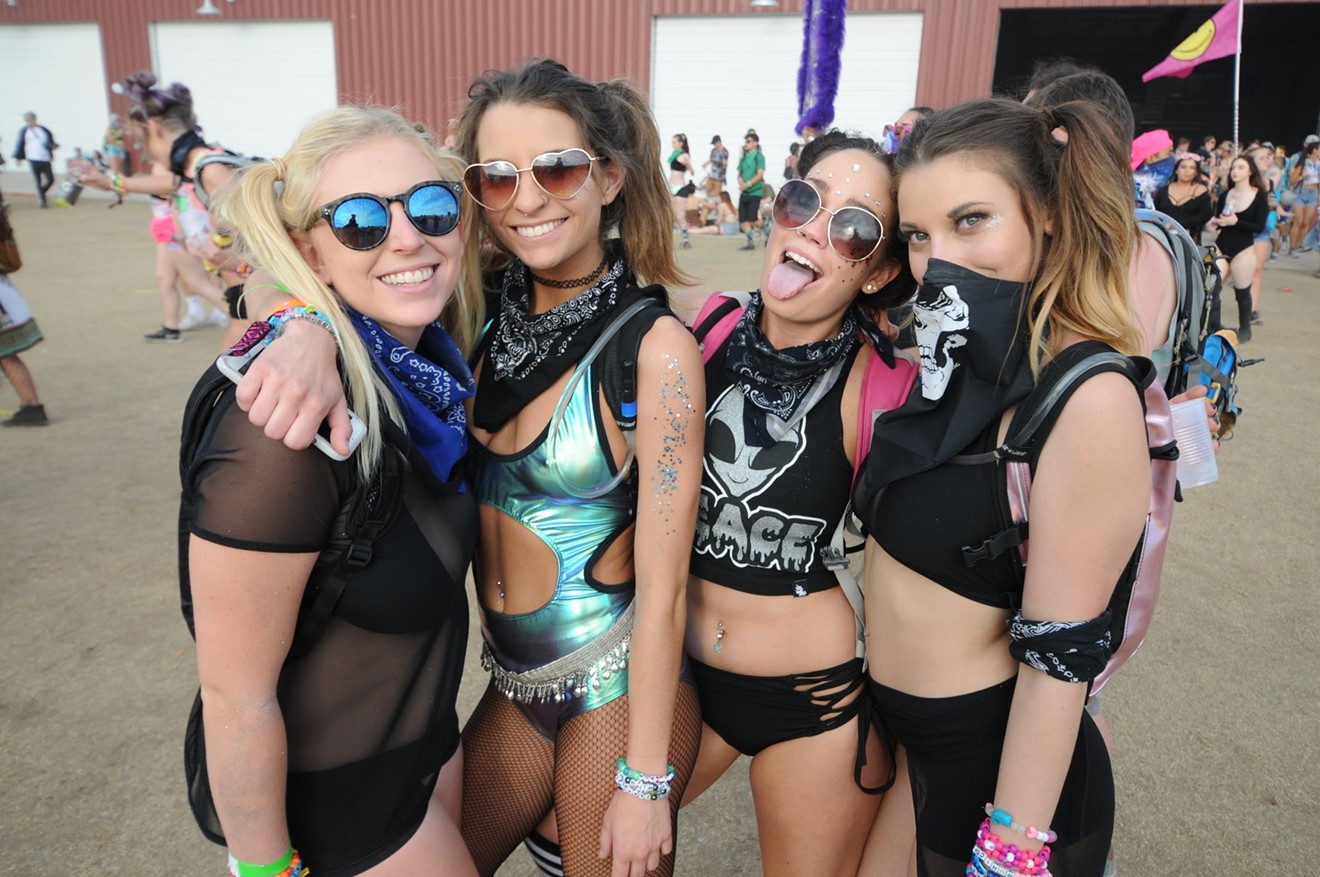 Patrons of last year's Phoenix Lights festival. Benjamin Leatherman
It takes a lot of time and effort to stage an alien invasion. Just ask the staff of Relentless Beats, the local electronic dance music event promoter, who are currently busy readying the Valley for an otherworldly experience involving UFOs and little green men.

They're in the final stages of prepping for Phoenix Lights, the extraterrestrial-themed EDM festival that will take place at The Park at Wild Horse in Chandler on Saturday and Sunday, April 7 and 8.

It's the first-ever event to take place at the newly opened outdoor venue, which is located on the Gila River Indian Community. And getting the place ready to be colonized by thousands of EDM fans is no easy feat.

“We've got to make it into a festival grounds and build it out for a 48-hour event, which is really a lot of work,” says Relentless Beats owner Thomas Turner. “Once we're done, you hopefully won't feel like you're just on a patch of grass anymore; you'll feel surrounded by the event we've created. And there's going to be a lot things we use to do that.”

One of the biggest will be the enormous art installation resembling a crashed UFO, which will be one of the centerpieces of the festival. Turner says that a number of other alien-like displays, including some that float and levitate, will be present at the Park during Phoenix Lights 2018.

“People will want to look out for surprises,” he says. “We've tried to go above and beyond to turn the space into a unique experience.”

Phoenix Lights attendees will also have close encounters with performers doing their thing on four different stages at the park, each of which will feature alien monikers like the “Mothership” or “The Colony.” One of the stages, which is dubbed “The Fallout,” will offer sets by local DJs including Sean Watson, Briggs, Medicine Mike, Cormac, and Nathan Reeser.

What else is in store for this year's Phoenix Lights? Check out the following guide to the event, which includes set times, ticket details, and info on where to party both before and after the festival. 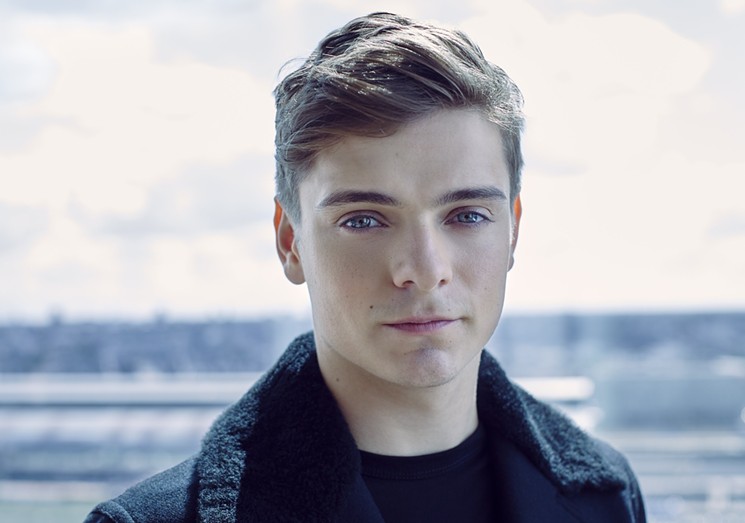 Prices: General admission is $99 per day, $179 for the weekend. VIP tickets (which include express entry, access to exclusive lounges and viewing decks, and a souvenir lanyard) are $149 each day or $259 for the entire festival.

Platinum VIP packages are $349 to $599 and include all the aforementioned perks, as well as a steakhouse dinner, gift bag, onstage viewing, and access to the artist hospitality lounge.

Wristbands:  Every festival patron will be issued one and you won't be able to enter without it. (Click here to activate yours.) An RFID tag that's attached to each wristband will be scanned upon entry and is the only thing you can use to purchase stuff at the festival, since Phoenix Lights is a cashless event.

Age Limits: Any Earthling can attend, regardless of age. Those younger than 15 must be accompanied by a human adult, however, and everyone must buy a ticket. You also have to be at least 21 to drink alcohol. 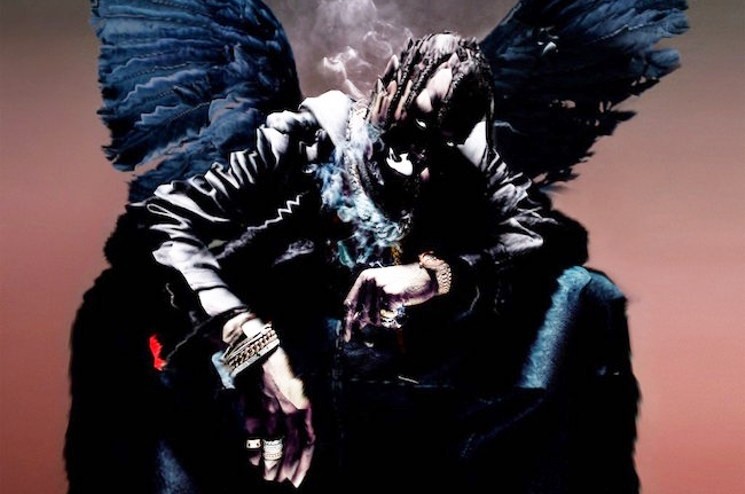 Travis Scott is scheduled to perform on Sunday, April 8, at Phoenix Lights.
Courtesy of Epic Records
Getting There: Take Interstate 10 to take Exit 162 for Wild Horse Pass Boulevard. Drive west from there and follow the signs that will direct you to where to park.

Parking: It's $10 per day, per vehicle. If you'd like to park as close to the venue as possible, that's $30. You can pre-purchase both options online.

Getting Inside: Have your ID handy, since you'll need it to get your tickets and wristband. Security will perform pat-downs and bag checks on everyone. Keep in mind, there is no re-entry allowed.

Lockers: If you'd like to stash your stuff, two-day locker rentals are $30 each. A phone charger will be available in case yours runs out of juice.

Weather: It'll be hot both days of the festival; temperatures will be in the mid-90s. Dress appropriately, seek shade whenever possible, use sunblock, and hydrate often. Gucci Mane is scheduled to perform on Saturday, April 7, at Phoenix Lights.
Jonathan Mannion
Schedule and Set Times: The music will start immediately after gates open. Four different stages will be located around the park and are appropriately alien-themed. And if you'd like to know when your favorite DJ or rapper is performing, here's the complete schedule for each stage. 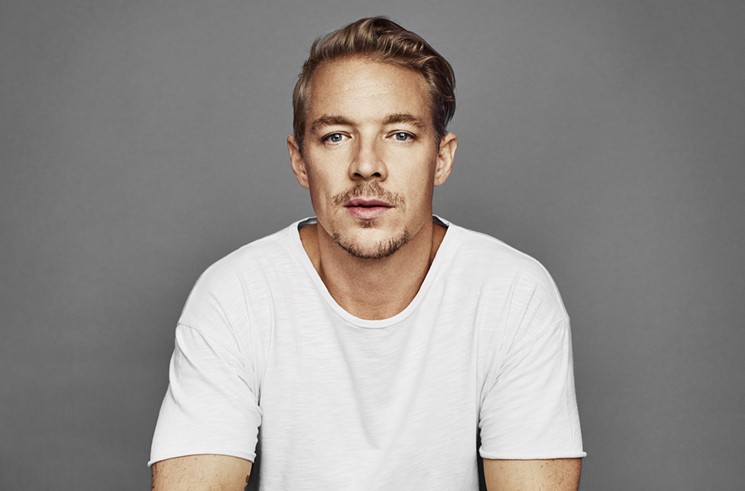 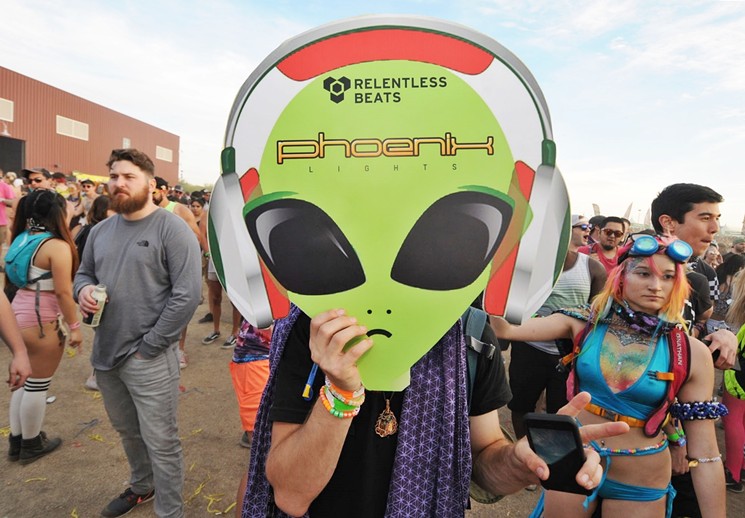 Phoenix Lights is a mix of ETs and EDM.
Benjamin Leatherman
Food and Drink: Vendors, concession stands, and food trucks will all have grub for sale. If you're 21 or older, there will be multiple bars with adult beverages. They probably won't have any Pan Galactic Gargle Blasters, though.

Water: You know the drill. It's the beginning of the warm season, which means staying hydrated is of the utmost importance. Plastic and aluminum bottles and Camelbak-style water bladders are allowed, provided that they're all empty upon entry. A free refill station will be available at the park.

Bring: A government-issued ID, as well as a fully charged cellphone, friendly vibes, glow toys, colorful outfits, and kandi. And don’t forget a hat or other sun protection, since it's Arizona and all. You can also bring your awesome totems, but only if they are made from lightweight materials and no bigger than 10 feet in height.

Pre-Parties: If you'd like to get hyped for the festival, two “Phoenix Lights Sightings” pre-parties will take place on Friday, April 6, in Tempe.

The first will happen at Shady Park, 26 West University Drive, and feature a performance by electro-house DJ/producer Michal Menert and the Pretty Fantastics. Doors are at 9 p.m. and admission is $15. A few blocks away, Stellar will be serving up EDM at Americana Burgers & Beer, 350 South Mill Avenue, starting at 9 p.m. There's no cover if you RSVP online.

After-Party: L.A.'s infamous Brownies and Lemonade party crew will put on a Phoenix Lights after-party on Saturday night at the Rawhide Event Center that will include sets from GTA, Wax Motif, Wuki, and others. Doors open at 11 p.m. and tickets are $25.