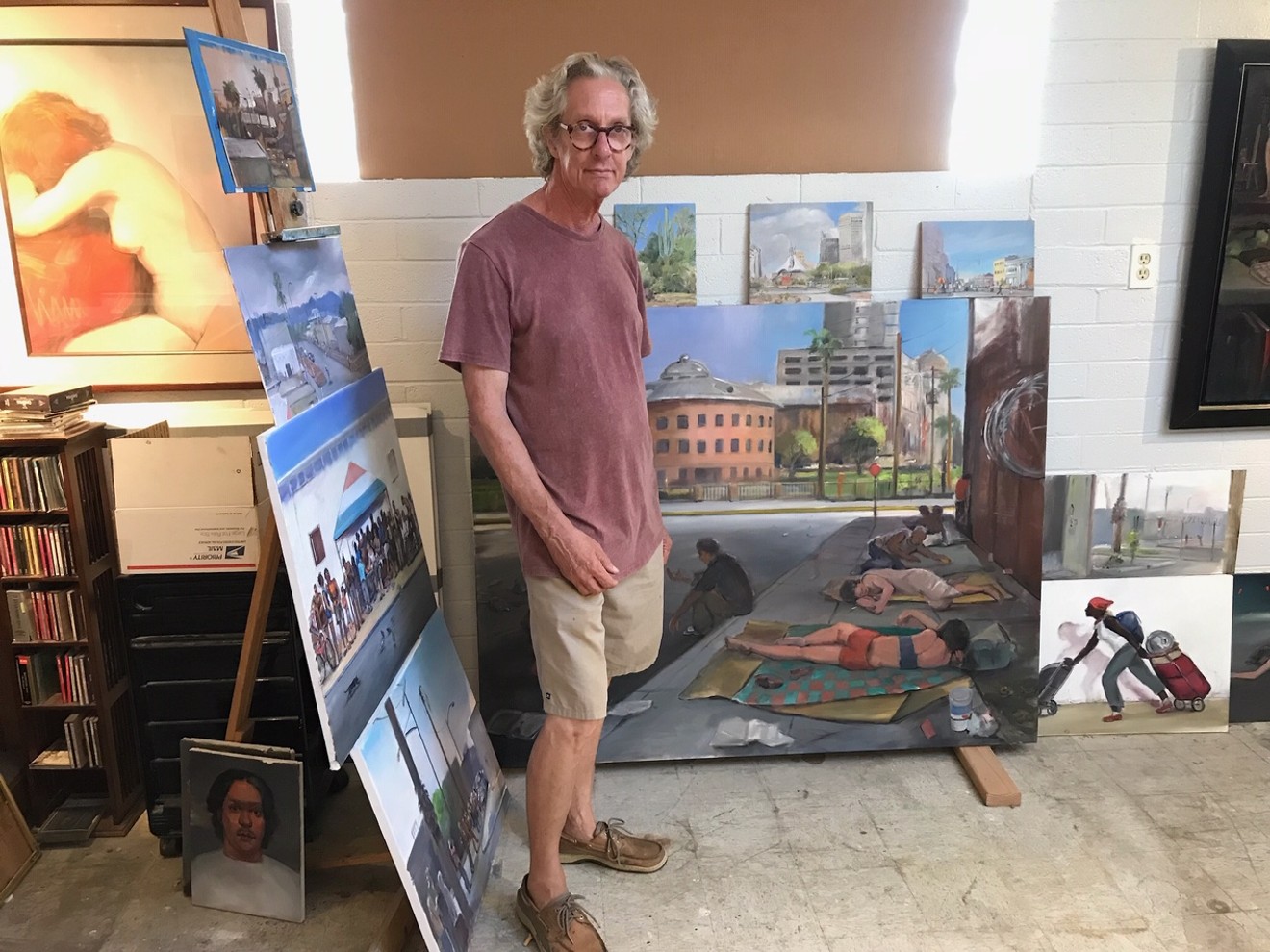 Joel Coplin paints portraits of the invisible. Lynn Trimble
Just six blocks east of the Arizona State Capitol, there’s a street where you can always find people walking, no matter the temperature or time of day. Those people are experiencing homelessness. A series of portraits by Phoenix artist Joel Coplin features many of their faces.

Coplin and his wife, artist Jo-Ann Lowney, have a creative space named Gallery 119, which is situated inside a former warehouse on 11th Avenue just south of Washington Street. That’s where Joel spends much of his day, painting and interacting with people he meets on the street.

“There are stories all around us,” Coplin says.

In one room, 15 portraits measuring 18 by 24 inches sit side-by-side on the floor, leaning up against a red brick wall. Nearby, Coplin keeps a couple of chairs, where people he’s met on the street sit for portraits.

“They’re all one-hour portraits,” he says.

As Coplin paints, he listens to his subject’s life stories.

There’s Sylvester, who talks about getting a dishonorable discharge because he couldn’t fathom going back to the Vietnam War after being seriously wounded. And Jennifer, who talks about her struggles as a single mom. One subject wears a baseball cap, and another a bandanna. 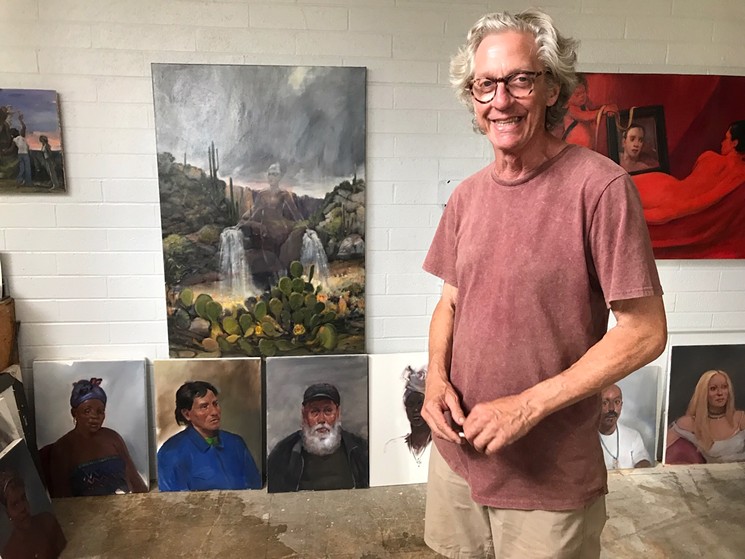 Joel Coplin listens to his subject's life stories as he paints their portraits.
Lynn Trimble
People experience homelessness for a variety of reasons, according to Father Tom Doyle of André House, a nonprofit located one block south of Gallery 119 that serves the homeless population. Some have jobs but still can’t afford housing. Others are looking for employment, and some aren’t capable of working.

“Homelessness impacts all kinds of people, from every ethnic background,” Doyle says. “I’ve met people living on the street as young as 16 and as old as 91.”

Coplin’s portraits and his paintings of street scenes reflect that diversity. Often, he paints what he sees happening just outside the gallery or around the block. One painting depicts a woman pulling a red suitcase with broken wheels. Another shows three people huddled together, using a blanket as a tarp.

On any given night, there are about 6,500 homeless people on the streets of Phoenix, Doyle says. Yet Central Arizona Shelter Services has fewer than 500 beds. So Coplin is used to seeing people sleep right outside the gallery.

“Most people avert their eyes when they see people who look disheveled on the streets,” Doyle says. “Joel gives them dignity, by looking inside them rather than looking at them.”

Odds are, the people Coplin encounters have no idea he’s a longtime staple of the Phoenix arts scene. For years, Coplin and Lowney were part of an artist collective called East Side Art in Mesa. One of Coplin’s mural-like paintings, depicting significant periods in Phoenix history, is installed on the ground floor at Phoenix City Hall. More recently, he’s done work for André House, helping to paint in a new section of an old mural.

Coplin isn’t the only Phoenix artist addressing the issue of homelessness.

Photographer Jon Linton has been doing portraits of homeless people for years, as part of his “I Have a Name” project designed to raise awareness and foster empathy. And fiber artist Ann Morton created a social enterprise project called “Street Gems,” which teaches people experiencing chronic homelessness to make jewelry using recyclable materials.

Coplin plans to keep painting portraits if only to help tell the stories of what’s happening on the streets of Phoenix.

“I see parts of the city that other people don’t see,” he says. “I’ll just keep documenting.”

He says, “What I’m really doing is painting America.”
KEEP PHOENIX NEW TIMES FREE... Since we started Phoenix New Times, it has been defined as the free, independent voice of Phoenix, and we'd like to keep it that way. With local media under siege, it's more important than ever for us to rally support behind funding our local journalism. You can help by participating in our "I Support" program, allowing us to keep offering readers access to our incisive coverage of local news, food and culture with no paywalls.
Make a one-time donation today for as little as $1.