Painting the Town: How Such and Champ Styles Became a Father-Son Graffiti Team 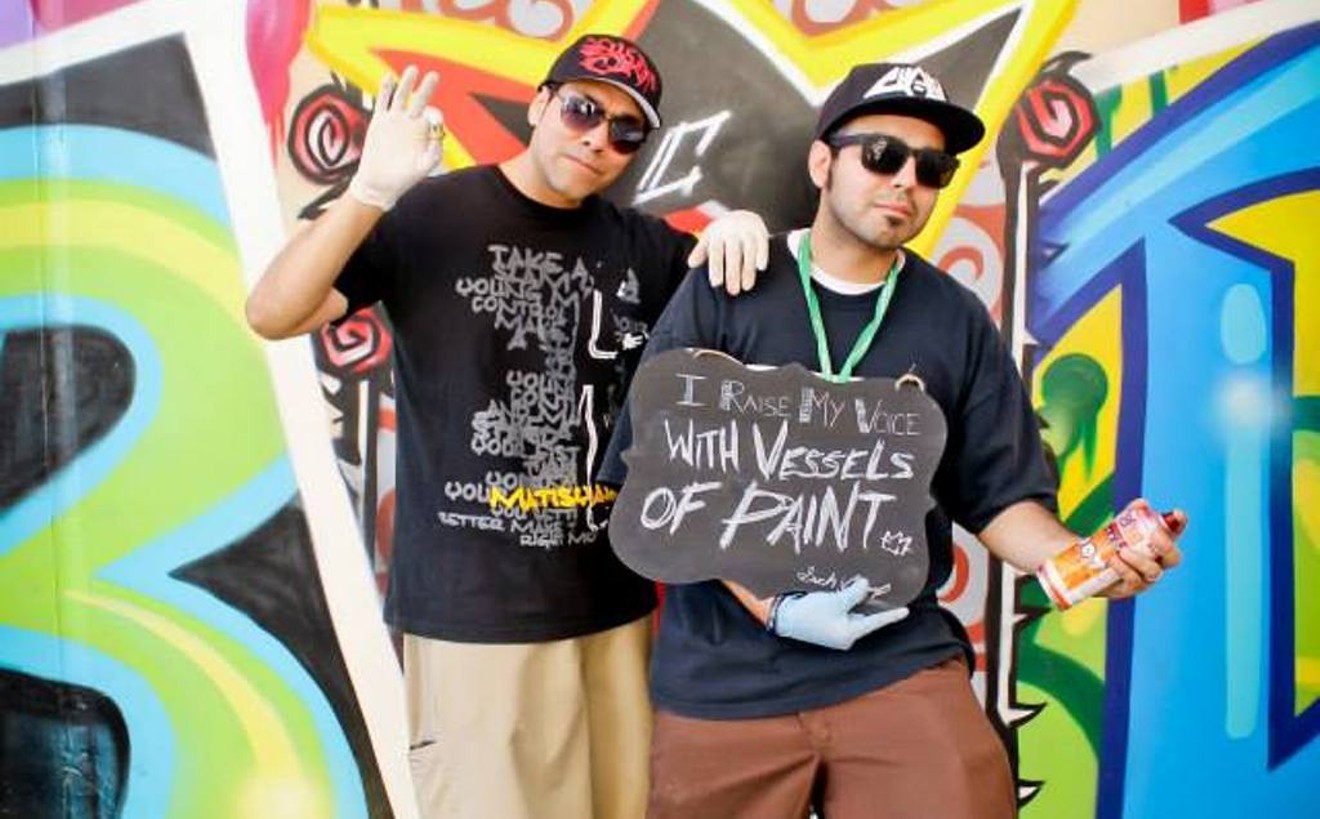 Father Such Styles (left) with his son and fellow artist, Champ Styles. Michael and Charith Densen
Like a lot of little boys, Champ Styles wanted to be just like his dad. But that got a little complicated at times, because Such Styles was doing graffiti when Champ was born back in 1983. They've been reliving old memories now that Father's Day is nearly here, like the time Champ used cans from a special box of Krylon paints Such was saving because the colors had all been discontinued.

Odds are, you’ve seen their work around town – in the Grand Avenue arts enclave or on Chandler’s San Tan Brewing Company. Today they make a living painting together through commissions from places like businesses and schools. And they're both studio artists with the city of Tempe, which means they visit every fifth-grade class and do an art lesson.

That's a far cry from where it all began. Early on, Such was doing graffiti art off the grid. He’d married his high school sweetheart, Annette, and had sons Champ and Christian. And he loved spraying graffiti on Southern Pacific trains that used to run through the city, like other artists who risked running afoul of the law to practice their craft.

“I just wanted to do train cars because no one was looking for it and I didn’t want to draw any attention,” Such says. Such is his artist name, by the way. He was born Noe Baez in south Phoenix in 1968, and grew up in south Tempe. His own father never approved of his painting, but that didn’t keep him from doing it.

Such recalls Champ sharing his interests early on, lining up cans of spray paint as a toddler, as if they were freight cars on a train. “I’d document my graffiti by taking pictures, and Champ would get into my box of photos and line those up around the house to make a train.” Just a toddler at the time, Champ tagged along when his dad was painting or showing his early artworks, which included model box cars with graffiti.

Still, he shared his love for all things graffiti with his son. When Keith Haring came to town in the '80s, where he painted a mural on a building at Central Avenue and Adams Street that’s since been demolished, Such bought Champ a T-shirt with Haring’s famous "Radiant Baby" design. 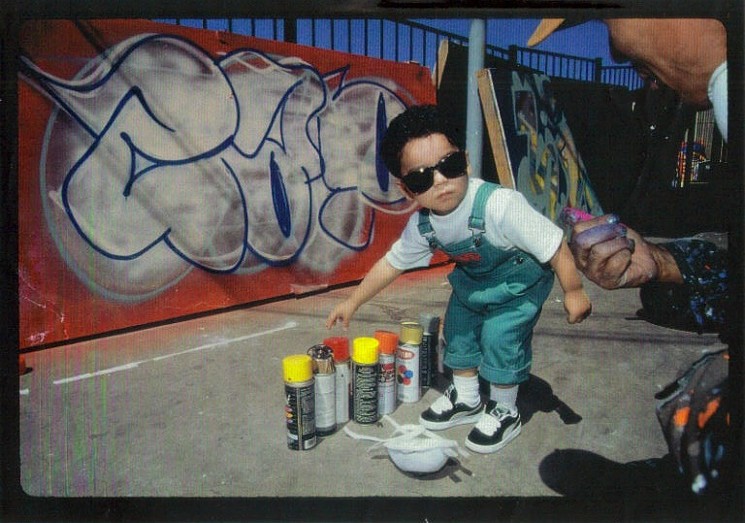 A young Champ Styles tagging along with his dad for some graffiti time.
Martha Cooper
Most kids use coloring books, but Champ drew in "black books" as a child, filling them with dinosaurs and cartoon characters. Black books are sketch books used by graffiti writers, who often pass the books around to share their work with other writers. “Dad got me my first real black book when I was 9,” Champ says.

By fifth grade, it was clear that Champ was going to follow in his father’s footsteps. “One day he got demerits at school, so I told him no TV,” Such says. “But I told him he could read a book or grab a documentary from my art room.”

Champ chose Style Wars, a film exploring hip-hop and graffiti culture in New York City during the late ‘70s and early ‘80s. “Seeing those big, larger-than-life letters on the subway cars, I knew I wanted to do that,” Champ recalls.

Such supported his son’s interest, throwing a big piece of sheet metal over milk crates in the back yard so Champ could practice painting. “He gave me Rustos, Krylons, and some awful watery paint from Walmart,” Champ says. “None of the art purpose paint was out yet.” Turns out, it was a frustrating experience, because the smooth metal surface didn’t catch the paint like a porous wall.

Champ practiced inside as well, working on one letter of the alphabet each day for his dad. “I guess he was just trying to test my commitment,” Champ says. “Sometimes he’d turn the lights out or stop me and say we had to go.” Turns out, Such was replicating situations he’d experienced as a young graffiti writer, working on train cars by moonlight or ditching his work when the cops showed up.

“I tried to train my kids in a chaotic state because not everything in life is going to be smooth,” Such says. “I’ve really seen his style develop, and now I’m starting to lean on him.” Such (left) and Champ Styles pause from live painting during a festival at Mesa Arts Center.
Jasmine Maganda
They’ve been painting together professionally many years now, often incorporating graffiti-style lettering and familiar characters from Howard the Duck to Hello Kitty. About 10 years ago, they did a painting that’s still on view at the Musical Instrument Museum. They’ve exhibited work in a show curated by Patti Astor of the renowned FUN gallery and several galleries around metro Phoenix, and done work for Valley Metro. In February, they’ll be showing art inspired by video game culture for a solo exhibition called “Two Players, Two Quarters” at Vision Gallery in Chandler.

“Some fathers and sons play baseball or go fishing together,” Champ says. “I’ve had more fun painting with my dad than anything else.”

Nowadays, Such does a lot of the lettering and Champ works on the background or other design elements. They'll take a break from painting on Father's Day, going to church as a family and enjoying Annette's homemade enchiladas. But they'll be back at it the next day, fussing over details like which shade of yellow to use.

“When I smell paint I think of my dad,” Champ says. “To me, graffiti means family."
KEEP PHOENIX NEW TIMES FREE... Since we started Phoenix New Times, it has been defined as the free, independent voice of Phoenix, and we'd like to keep it that way. With local media under siege, it's more important than ever for us to rally support behind funding our local journalism. You can help by participating in our "I Support" program, allowing us to keep offering readers access to our incisive coverage of local news, food and culture with no paywalls.
Make a one-time donation today for as little as $1.