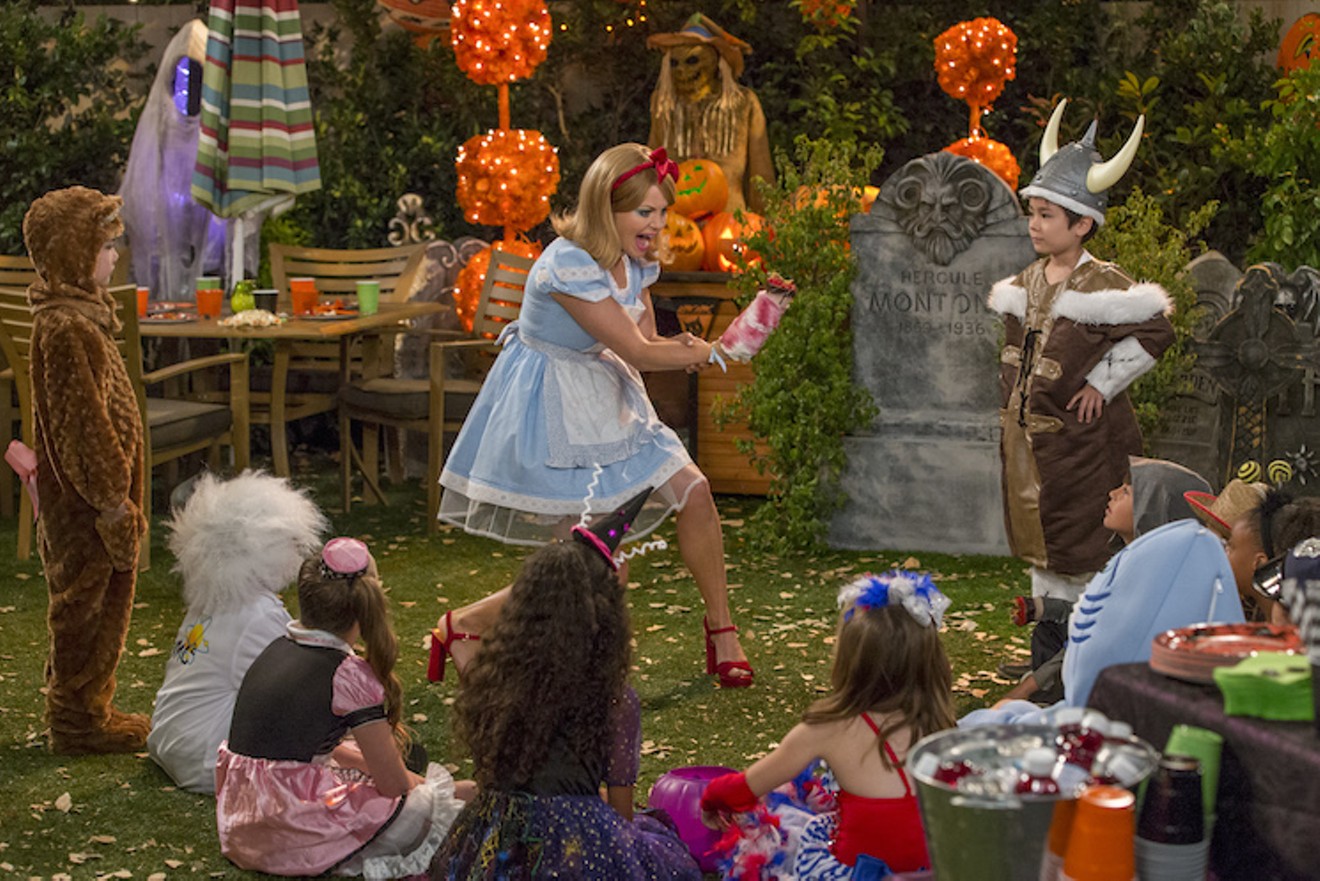 DJ tries to repair her Halloween cred (in the least scary costume). Michael Yarrish / Netflix
Every week, we'll be recapping season two of Fuller House, episode-by-episode. It's a graveyard smash.

One really great thing about the new season of Fuller House is that there are very defined milestones in the timeline, versus a show simply about the day-to-day life of this unconventional family. The première took place at the end of summer, and by episode four, we're already at Halloween. That seems pretty fast, considering there are still 11 episodes left. Based on the trailer, we know they'll cover at least through New Year's Eve, so November/December will cover a lot of ground.

Unfortunately, this episode doesn't bode well for the amount of story that's still left. Even anchored to a holiday, much of the episode truly felt like filler, only superficially progressing storylines like Steph and Jimmy's romance or Fernando and Kimmy's will-they-won't-they. The show was recently picked up for a third season, and it was revealed that it would go from 13 episodes to a whopping 18. At nearly 30 solid minutes each, we're a bit weary of just how much family fun we can truly handle.

For now though, we're on board, but not as much as DJ is on board with Halloween.

In true Tanner fashion, she's downright obsessed with it, which is understandable for a mom of three boys. In the midst of sewing family costumes, her middle son Max stages a Halloween intervention. In spite of all her enthusiasm, their house has been dubbed the lamest in town when it comes to overall spookiness. In fact, they lost major points on his friend Taylor's blog because they passed out pamphlets on childhood diabetes (no doubt a Danny Tanner special). This unnerves Deej, who quickly springs into action and offers to throw the spookiest party of all time for Max and his friends. She employs Kimmy's party planning prowess to pull together a last-minute party.

The Walking ... Romance?
Michael Yarrish / Netflix
Meanwhile, Jimmy Gibbler makes his return after being M.I.A. in the previous episode. He asks his main squeeze, Steph, to spend Halloween with him, which she (finally) enthusiastically accepts. His first idea was purchasing two tickets to Mighty Mountain's Haunted Halloween, a fright night event in the city. However, his quirkiness then leads him to the idea of the two of them actually participating in the haunt. He signs them both up to be zombies, which for some reason, Steph doesn't even question.

Ramona and Jackson make their way to Mighty Mountain, and Steph and Jimmy — in full zombie gear — are able to spot them as they make their way toward their designated scare spot. They pull them into the lab, genuinely unrecognizable in wigs and makeup. They taunt the two tweens by knowing their names and parts of their lives, including the fact that they had ditched DJ's party because they were "too cool." Even though it was Jimmy's idea in the first place, they guilt the two into going back to the homestead.

We do NOT love this Lucy and Ricky.
Michael Yarrish / Netflix
However, things aren't going well back at the party. Despite his Mom's best efforts, a very surly Max can't get over the fact that it's just not spooky enough. He mopes around in his bear costume (which zaps any sort of credibility he has, tbh). The snacks, decorations, and even the dog (dressed as a devil) are more adorable than anything, and baby blogger Taylor is equally underwhelmed. It's pretty unfair considering how much work DJ put in and frankly, Max was being a real dou ... err ... party pooper.

While Max sulks, his brother, Ramona, Steph, and Jimmy return home. Seeing the two dressed as zombies, Deej has an idea to turn the scary up to 11. They manage to call up many of the cast members at the last minute, who jump out of bushes and pretend to eat Max's brains for full effect. This sends Taylor in a tailspin, finally deeming the house's "lamest" curse as over.

There was also a whole bit we were supposed to care about between Kimmy and Fernando, who were dressed up as Lucy and Ricky from I Love Lucy. However, because Fernando continues to be the worst, he forbids Kimmy from performing with him at the party. Sure, it's meant to mirror some loveable Lucy moments, and even included a black-and-white musical montage that made the episode a few minutes too long. However, it was also a solid wake-up call for Kimmy. Homeboy didn't want her in the show, which seems like a big fat metaphor for how this relationship has been progressing. She wanted to do something together and this dude is too selfish. A friendly reminder: He cheated on her, and after she couldn't muster the strength to re-marry him, they've lived in an engagement limbo while he moved himself in without asking. Kimmy, darling, we know he's your baby daddy, but you gotta cut him loose, no matter how cute the accent.

If you didn't Snapchat this moment, did it even happen? #millennials
Michael Yarrish / Netflix
Perhaps the scariest part of the whole show? The egregious the call-outs to "modern day" advances, in case we were to ever forget that it's present tense. A few gems: