Your Guide to WWE Royal Rumble Week in Phoenix 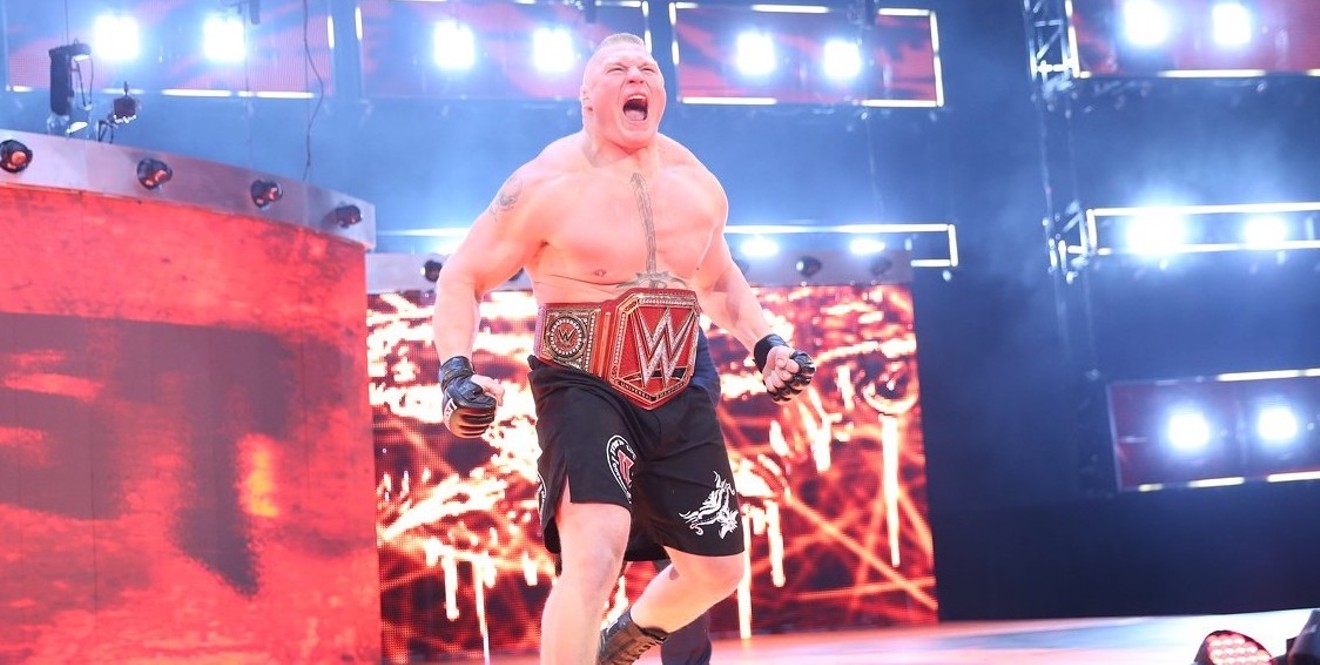 Get ready to rumble, y'all. Brock Lesnar and the rest of the WWE is invading the Valley. Courtesy of WWE 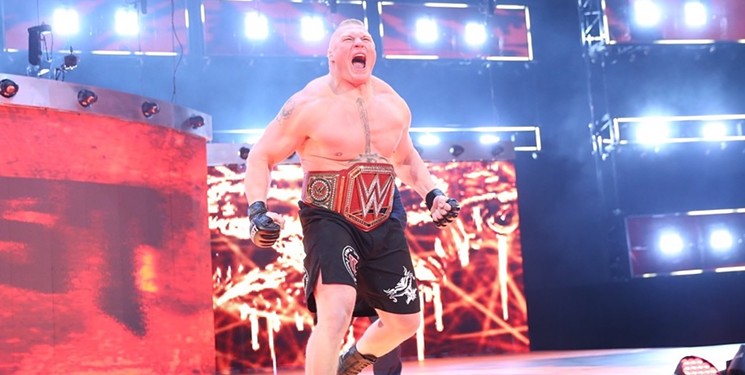 Get ready to rumble, y'all. Brock Lesnar and the rest of the WWE is invading the Valley.
Courtesy of WWE

It’s pretty safe to say that the Valley will be the focal point of the WWE universe for most of the next week – and that’s no wrestling-style hyperbole. All eyes will be on downtown Phoenix for five days straight, including the tens of thousands of wrestling fans in attendance and millions more watching around the world.

Besides the Royal Rumble itself, there will be a slew of events happening, such as live broadcasts, meet-and-greets, and fan gatherings, not to mention scores of matches. And the WWE won’t be the only game in town, however, as a few local indie promotions and notable wrestling geeks will also get into the action.

Here’s a look at everything wrestling-related that’s scheduled to happen in the Valley over the next few days. (Note: * denotes an official WWE event.)

WWE Royal Rumble Axxess*
Friday, January 25
Phoenix Convention Center
This three-day interactive fan event runs from Friday, January 25 to Sunday, January 27, and will  the chance to meet WWE superstars, watch matches, check out rare memorabilia, or just geek out. The Friday night session kicks things off and will run from 6 to 10 p.m.

General admission is $45, which includes the chance to get autographs and photos with Baron Corbin, Jeff Hardy, Asuka, Carmella, R-Truth, Bobby Roode, Chad Gable, and others. VIP tickets are $100 and offer express entry and an autograph and professional photo with Becky Lynch and Shinsuke Nakamura. Premium VIP is $150 and includes an autograph and photo with Daniel Bryan and Dean Ambrose and other perks. Kids 2 and under are free. (Note: Tickets cover a single session only.)

NotSam Wrestling Podcast Live
Friday, January 25
CB Live
Radio host, pro wrestling super-fan, and WWE commentator Sam Roberts will host a live version of his hilarious and informative NotSam Wrestling podcast on Friday night at the newly opened CB Live at Desert Ridge Marketplace. Joining him will be ultra-popular WWE commentator Corey Graves (a.k.a. “The Savior of Misbehavior”). Start time is 7:30 p.m. General admission is $25 and VIP tickets (which include up-front seating and a meet-and-greet) are $50.

Party Hard Wrestling’s PartyMania 3
Friday, January 25
The Nile Theater in Mesa
The party-hearty wrestlers of PHW will put their biggest event of the year. Eight matches are scheduled, including a main event title bout between PHW’s “Champion of the Multiverse” Shane Marvel and The Party Ranger. Bell time is 8 p.m. Tickets are $15 for general admission and $8 for kids 12 and under.

Local rapper and wrestling geek Mega Ran.
MedafOracle Photography
Ramble Before the Rumble
Friday, January 25
Crescent Ballroom
The wrestling geeks of local podcasts Mat Mania and The Steel Cage will team up for an evening of gabbing about grappling. Local rappers (and Mat Mania co-hosts) Mega Ran and Hall will also perform, as will indie band Bear Ghost. Start time is 6 p.m. Tickets are $10 in advance, $15 at the door.

WWE Superstar Meet-And-Greet
Saturday, January 26
Cricket Wireless in Tempe
Wrestlers Sasha Banks and Bayley will conduct a Facebook inside the Cricket Wireless location at 733 East Guadalupe Road in Tempe starting at 10:30 a.m. A special meet-and-greet with fans will follow.

WWE Royal Rumble Axxess*
Saturday, January 26
Phoenix Convention Center
Saturday sessions will happen from 8 a.m. to noon and 1 to 5 p.m. Matches for the “Worlds Collide” tournament will take place and WWE superstars at the first session include Booker T, Ember Moon, Mickie James, Kurt Angle, and The Bar. Meanwhile, Bobby Lashley, Lio Rush, and Elias will offer autographs for VIP and Finn Bálor and A.J. Styles will do the same for Premium VIP attendees.

The second session will feature appearances by Alexa Bliss, Lana, Titus O’Neil, Jinder Mahal, Nia Jax, and Rusev. VIP ticketholders can get autographs from Braun Strowman and Rey Mysterio while The New Day, The Miz, and Maryse will be in the Premium VIP area. $45 general admission, $100 for VIP, and $150 for Premium VIP. Kids 2 and under are free. (Note: Tickets cover a single session only.)

Party Hard Wrestling’s Pancake Party
Saturday, January 26
The Nile Theater in Mesa
Partake in both flapjacks and bodyslams during this pancake-filled wrestling breakfast put on by local promotion Party Hard Wrestling. Five surprise matches will take place while Nile Cafe serves the eats for $5 a plate. The event starts at 10 a.m. and its free to attend with a PartyMania 3 ticket stub.

NXT's Aleister Black.
Miguel Discart/CC BY-SA 2.0/via Flickr
NXT Takeover: Phoenix*
Saturday, January 26
Talking Stick Resort Arena
One of the hottest events during Royal Rumble week will be NXT TakeOver: Phoenix. For those who aren’t familiar with NXT, its the developmental brand for the WWE and is where many future WWE superstars hone their craft and characters before joining shows like Raw or SmackDown. Its also become insanely popular with die-hard wrestling fans in recent years.

Every few months, the brand stages a pay-per-view-like event called NXT TakeOver, which features its biggest stars squaring off. The latest edition is NXT TakeOver: Phoenix, which will happen on Saturday night at Talking Stick Resort Arena. Five matches are scheduled to take place, with the biggest bout being NXT Champion Tommaso Ciampa taking on challenger (and former champ) by Aleister Black.

Other bouts include Johnny Gargano facing Ricochet for NXT’s North American championship, a showdown between the “King of Bros” Matt Riddle and Kassius Ohno, and NXT Women’s Champion Shayna Baszler taking on challenger Bianca Belair for the title. Plus, the NXT’s Tag Team Championship will be up for grabs when The War Raiders challenge current champs The Undisputed Era. NXT TakeOver: Phoenix kicks off at 4:15 p.m. Tickets are $20 to$400 via ticketmaster.com.

WWE Royal Rumble Axxess*
Sunday, January 27
Phoenix Convention Center
The final session goes from 8 a.m. to noon and will feature the conclusion of the Worlds Collide tournament. Those with general admission can meet The Usos, Mandy Rose, Lucha House Party, and The Squad. Drew McIntyre and Charlotte Flair will be autographing in the VIP section while Sasha Banks, Bayley, and Seth Rollins will be signing for Premium VIP attendees. $45 general admission, $100 for VIP, and $150 for Premium VIP. Kids 2 and under are free. (Note: Tickets cover a single session only.)

Something to Wrestle With
Sunday, January 27
Stand Up Live
Veteran WWE creative team member Bruce Pritchard will conduct a live version of his popular podcast Something to Wrestle With along with co-host Conrad Thompson. Expect plenty of tales of wrestling’s past. 18-and-over only. 1 p.m., $35 for general admission, $65 for a preshow meet-and-greet at 11:30 a.m. (There’s also a two-drink minimum.) 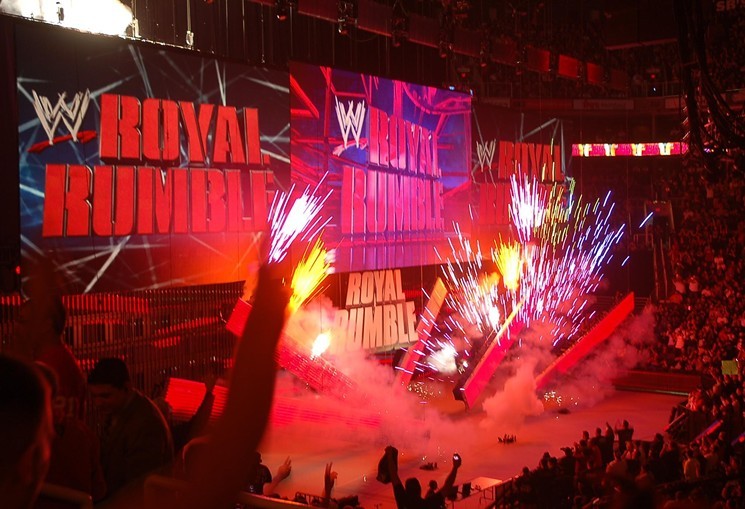 There's going to be a lot of action at this year's Royal Rumble.
Benjamin Leatherman
WWE Royal Rumble 2019*
Sunday, January 27
Chase Field
WWE superstars will compete in two 30-person Royal Rumble matches (one for men and the other for women), each offering the winner a title shot at WrestleMania 35 in April. Male participants will include John Cena, Seth Rollins, Samoa Joe, Drew McIntyre, Bobby Lashley, and Jeff Hardy. The women’s Rumble will feature such wrestlers as Ember Moon, Ruby , Liv Morgan, Natalya, and Naomi.

Six other matches are scheduled, including Daniel Bryan versus A.J. Styles for the WWE Championship, Brock Lesnar versus Finn Balor for the Universal Championship, and Becky Lynch taking on Asuka for the Smackdown women’s title. The action begins at 4 p.m. Tickets are $36.50 to $1,506.50.

Dolph Ziggler & Friends
Sunday, January 27
Stand Up Live
WWE star, stand-up comedian, and Valley resident Dolph Ziggler will serve up laughs after the Rumble along with fellow comic Sarah Tianna. The 18-and-over only event starts at 9:30 p.m. Tickets are $25 for general admission, $40 for admission plus a meet-and-greet and autograph, and $50 for reserved seating and the aforementioned perks. (There’s also a two-drink minimum.)

Mat Mania's Royal Rumble After-Party
Sunday, January 27
Cobra Arcade Bar
Mega Ran will get behind the mixers for a rare DJ set during Mat Mania's post-Rumble party affair and plans to spin a mix of video game music, wrestling themes, and hip-hop. Meanwhile, The bar will serve geek-inspired cocktails and a WWE-themed cosplay contest for prizes will take place. There also may or may not be a few special guests dropping by the party. The mania begins at 10 p.m. Admission is free.

Two main events will happen during the evening. Newly minted Intercontinental Champion Bobby Lashley will defend against challenger Seth Rollins (who he beat for the title in a three-way match that also Dean Ambrose) in what should be an epic encounter. The other main event match will see Finn Bálor teaming up with Elias to take on Ambrose and Drew McIntyre. Start time is 5:30 p.m. Tickets are $20 to $600 and can be purchased via ticketmaster.com.

Valley resident Daniel Bryan, who may or may not be WWE Champion after his battle with AJ Styles at the Royal Rumble, will join forces with Randy Orton and Samoa Joe in a six-man tag team match against Styles, Rey Mysterio, and Jeff Hardy.

Other WWE superstars scheduled to appear during the broadcast will include Becky Lynch, Charlotte Flair, and Asuka. The New Day will also be there and there may or may not be pancakes involved. SmackDown Live! is scheduled to start at 5:45 p.m. Tickets are $20 to $600.
KEEP PHOENIX NEW TIMES FREE... Since we started Phoenix New Times, it has been defined as the free, independent voice of Phoenix, and we'd like to keep it that way. With local media under siege, it's more important than ever for us to rally support behind funding our local journalism. You can help by participating in our "I Support" program, allowing us to keep offering readers access to our incisive coverage of local news, food and culture with no paywalls.
Make a one-time donation today for as little as $1.