Dawn Marie reads at The Whole Story: Part III. Rachel Egboro
The weekend is here, Phoenix. Whether you wanna spend it bouncing with Big Freedia, hearing The Whole Story at Phoenix Art Museum, perusing the work of Tucson artist George Strasburger, or playing in Skee-Ball a competition, there's something for you. For more things to do, visit the New Times' curated calendar.

The Whole Story: Part III
Since January, Phoenix has been energized by quarterly storytelling evenings that represent the black community, thanks to The Whole Story and Phoenix Art Museum. Fostering both solidarity and outreach, the performances are curated and coached (as is typical for live literature) and relate events of the tellers’ lives in engaging and entertaining ways.

Get ready to roll.
Megan Lundquist
In The Whole Story: Part III, on Friday, August 4, director Rachel Eseoghene Egboro (The Storyline) will draw from her experience, along with featured storytellers Sentari Minor, Floyd Galloway, Tina Brown, Dawn Marie Klecka, and Candice Tolliver. It’s a diverse set of worldviews, informed by the lives of teachers, activists, artists, consultants, journalists, and others.

’90s Party and Skee-Ball Tournament
The Phoenix Fray, a social sports-league group, is pulling together two things for one party: 1990s nostalgia and Skee-Ball.

Visit Bevvy, 4420 North Saddlebag Trail, #100, in Scottsdale, for the two-in-one ’90s Party and Skee-Ball Tournament. Arrive ready to dance the night away (and battle it out, arcade-style) starting at 7:30 p.m. on Friday, August 4. Each six-person team gets two kegs at the start of the Skee-Ball — and the chance to win a cash prize. Registration for the competition is $10 per team at the Phoenix Fray website. Admission the party is free. Lindsay Roberts 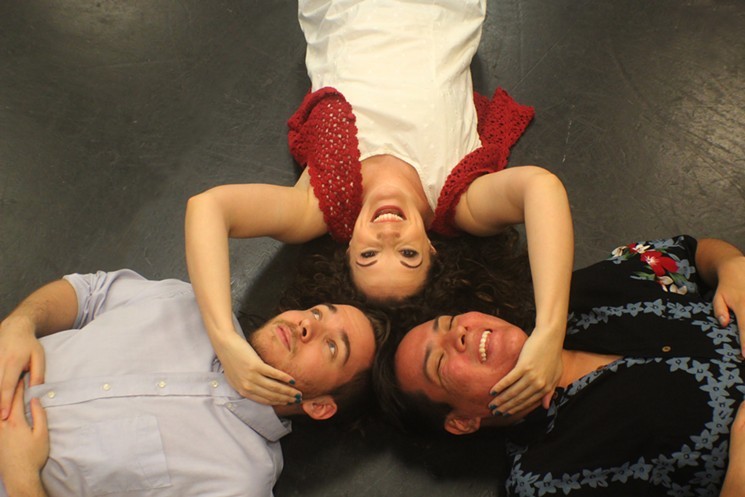 Melody Knudson, David Magadan, and Chavez Benally are [sic].
Kim See
[sic]
Just as a black box theater is a small, modest space where things get experimental, your 20s can find you in a teensy apartment, trying out life skills, not always successfully. Playwright Melissa James Gibson, currently known for projects such as Netflix’s House of Cards, penned an Obie-winning script, [sic], about that very situation. Mesa Encore Theatre’s Black Box Series presents the play through Sunday, August 20.

Three young neighbors, struggling with career and personal stuff, make and break connections as they dwell behind their own walls yet within mere feet of one another. That’s kind of metaphorical.

Lucha Libre Arizona’s Mas Lucha includes multiple bouts, which means more masks, a parade of colorful tights, and endless entertainment. These lively competitions feature (wrestlers) who utilize an array of outlandish and sometimes pretty crazy moves in order to become victorious. Whether they’re tossing one another through the air or bouncing off the ropes of the ring, it’s a blast from start to finish.

The family-friendly acrobatic matches start at 6 p.m. on Saturday, August 5, at AWF Arena, 5658 North 51st Avenue in Glendale. Admission is $10 for adults, $5 for kids. Premium seats are available for $13. Visit the Facebook event page. Amy Young

From a photography studio on the South Rim of the Grand Canyon, Ellsworth and Emery Kolb risked the elements to capture scenic snapshots of the stunning tourist spot in the early 1900s. Travel writer Roger Naylor tells the colorful duo’s story in his beautifully illustrated book The Amazing Kolb Brothers of Grand Canyon, a well-researched chronicle of how the siblings took chances time and time again to capture Arizona’s history.

Ron May will (potentially) get turnt at the roast in his honor.
Eric Thurnbeck
Roast of Ron May
Stray Cat Theatre’s been a beloved institution since 2001. Founding artistic director Ron May is the company’s face, guts, and heart. Theater’s a collaborative art, you’d be nowhere without your teammates, blah blah blah, and May would be the first to point that out. But there’s just something about the guy.

So his close friends and colleagues will say terrible things about him during the Roast of Ron May, an evening of luau-themed dining and Stray Cat fundraising. Joe Kremer leads a panel including Cathy Dresbach, Brooke Unverferth, and Kerry Lengel. Auctions and a raffle-like game called Tops or Bottoms (perhaps not what you think) round out the festivities.

No-host cocktails and mingling begin at 5:30 p.m. on Saturday, August 5, at the Radisson Hotel Phoenix Airport, 427 North 44th Street. Admission is $75, or $25 without dinner. Tickets and opportunities to be more generous are at the Stray Cat Theatre website or 480-227-1766. Julie Peterson 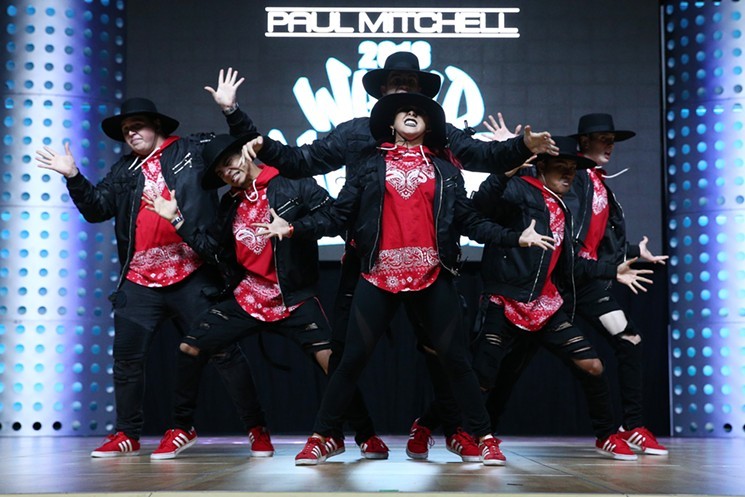 See what happens when ocean forms hit the desert streets at Eye Lounge.
Danielle Wood
“Symbiosis: Urbanity and the Natural Landscape”
Danielle Wood recently took her ocean-inspired ceramic art on the road. For the artist’s latest exhibition, “Symbiosis: Urbanity and the Natural Landscape,” she’s displaying photographs blending natural and urban landscapes accompanied by a wave-like installation of her ceramic forms.

Some photographs show her sculptural pieces placed around the city, in sites ranging from a light rail stop to a graffiti wall. Others show them in outdoor settings free from human constructions. It’s Wood’s way of exploring the interface of organic and manmade landscapes. But it also pays homage to the community. 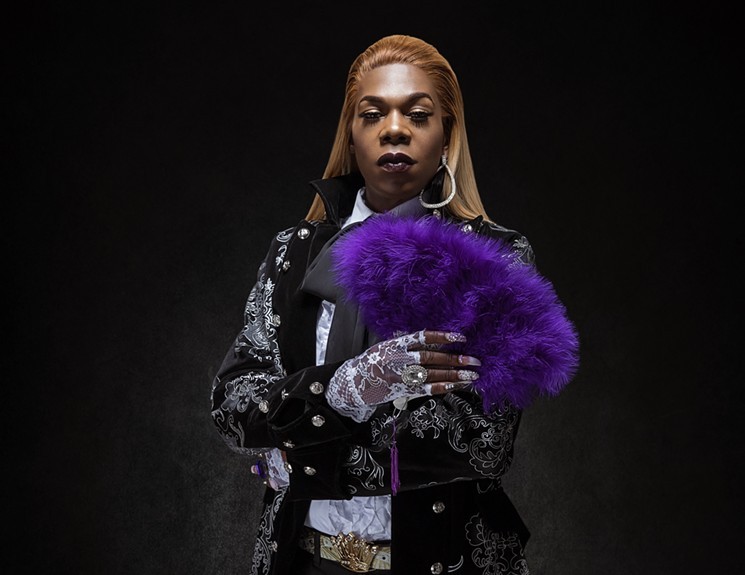 Bounce it big with Freedia.
Courtesy of Big Freedia
Big Freedia
When music scholars write the history of bounce music, we’d bet Big Freedia will get her due as the artist who pushed the genre into the spotlight after years underground. That probably has something to do with Freedia’s numerous festival appearances or the popular Fuse reality program Big Freedia: Queen of Bounce. Beyoncé even sampled Freedia on the single “Formation.”

On Saturday, August 5, Freedia will bring her brand of bounce to the Valley to raise awareness about HIV in the black community.

Freedia is scheduled to perform at the Because We Care 2017 Music Series at 7:15 p.m. at The Parsons Center for Health and Wellness, 1101 North Central Avenue. Tickets are $25 and up. For more information, visit the Big Freedia website. Jason Keil

It’s a snowball of creativity, starting with a band of clueless actors and playwrights and crashing into an evening of new 10-minute plays, memorized and fully staged. You’ll have no idea what you’re going to see, but it should comfort you to know that mere hours ago, the writers and cast were in the same boat. The results tend to include a lot of laughs and “hold my beer” moments.

Watch actor Val Kilmer completely become Mark Twain.
Courtesy of Standup Live
Cinema Twain
Acting hits its most magical peak when one person seamlessly transforms into another. It’s especially good when it’s kind of hard to fathom, like actor Val Kilmer completely becoming author Mark Twain. Let him tell you what that was like at this film screening.

Join Kilmer at the Cinema Twain event for a screening of his one-man show, Citizen Twain, where he stars as the legendary author. The show offers insight Twain’s life, as well as his rigid, and often humorous, perspectives. Kilmer performed the play at different theaters around Los Angeles, often to sold-out crowds. He will introduce the 90-minute movie and conduct a question-and-answer with the audience following the screening. See Kilmer at his 19th-century best at 7 p.m. on Sunday, August 6, at Stand Up Live, 50 West Jefferson Street. Admission is $30 for guests 18 and older. There’s a two-drink minimum. Call 480-719-6100 or visit the Stand Up Live website. Amy Young

Geeks welcome.
Benjamin Leatherman
Star Wars Launch Party & Pinball Tournament
If you’re a pinball-’ Star Wars fanatic, you might think Tilt Studio’s Star Wars Launch Party & Pinball Tournament was created just for you. But actually, Tilt’s hosting the bash in honor of Stern Pinball launching its new Star Wars game. Attendees are encouraged to dress in their best Star Wars threads and enter contest. Getting to touch that machine before your friends could put you in an enviable position.

Form a group and compete in the Three-Strike Pinball Tournament for prizes and trophies. Geeky gamer fun happens from 1 to 6 p.m. on Sunday, August 6, at Tilt Studio in the Arizona Mills Mall, 5000 Arizona Mills Circle, #669, in Tempe. Admission is free, and food and drink specials are available. Call 480-648-1222 or visit the Facebook event page. Amy Young