B-E-E-R. Courtesy of Valley Bar
Nothing to do this week? No problem. Hear a reading from the poet behind "Good Bones," spend an evening with Ira Glass, or kick back for a special edition of Phoenix New Times' Shooflies. For more things to do, visit New Times' calendar.

Spelling Bee-r
Ever heard of a Spelling Bee-r? Let us define it for you. “Spelling Bee-r:” an event where you can relive your elementary school spelling bee days by competing against friends and other bargoers. Oh, and there’s lots of beer.

Competitors should brush up on spelling skills and beer terminology, and spectators should bring some extra cash for drink specials. Hosted by Brooksie, the competition will start at 8 p.m. on Thursday, January 18, at Valley Bar, 130 North Central Avenue.

Email [email protected] if you’d like to compete. Admission for the 21-and-over event is free. For more information, visit the Facebook event page. Lindsay Roberts
Harvey
Apparently, embarrassing your family until they try to get you committed generates good comedy, not just dreadful memories that last a lifetime. Mary Chase’s Harvey won the 1945 Pulitzer Prize for drama and was wildly successful on stage and screen, starring Jimmy Stewart as a man whose best friend is a tall, invisible rabbit. Transported by the script’s virtues and Stewart’s acting chops, thousands of people allegedly remembered having seen Harvey during the performance (which does not actually happen, on account of the invisibility).

Jazz up your jokes.
Lynn Trimble
Jazz & Jokes
Used to be that stand-up comedians got their start performing in jazz clubs and variety shows. Jazz & Jokes throws it back to those days. It’s a monthly event that brings together musicians and comedians to create funny, thoughtful, and improvisational new work.

Every third Thursday at The Nash, 110 East Roosevelt Street, a jazz trio performs alongside jokesters putting on routines. Each edition features improvisational moments, as the players and comedians collaborate on the spot. The 18-and-older show starts at 9 p.m. on January 18, and tickets are $10. For more information, call 602-795-0464 or go to the Nash website. Laura Latzko 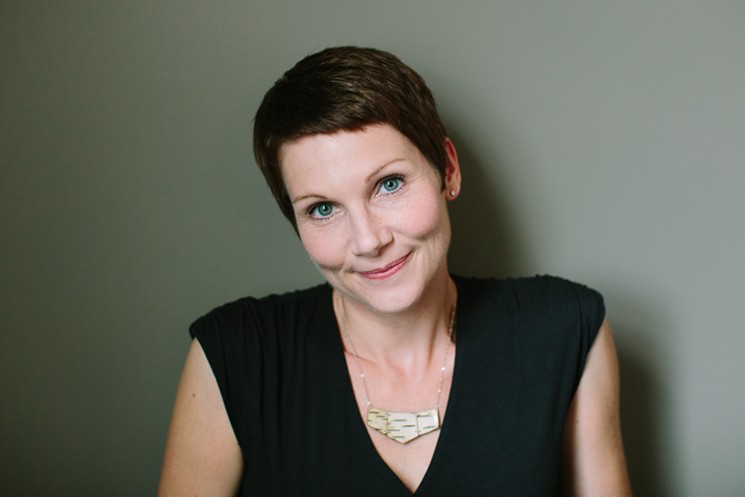 Maggie Smith will visit ASU.
Studio127 Photography
Maggie Smith
In August 2016, Maggie Smith captured the shock and zeitgeist surrounding the Pulse Nightclub shooting in Orlando and the assassination of British politican Jo Cox with the title poem of her collection Good Bones. It became a viral sensation worldwide, and has since been translated into numerous languages, from French to Tamil. It earned Public Radio International’s “Official Poem of 2016” and was even read by Meryl Streep at the 2017 Academy of American Poets Gala at Lincoln Center.

Admission is free, but space is limited and RSVPs are recommended. Smith’s poetry collections will be available for purchase. For more information or to RSVP, visit the Virginia G. Piper Center of Creative Writing website or call 480-965-6018. Michael Senft 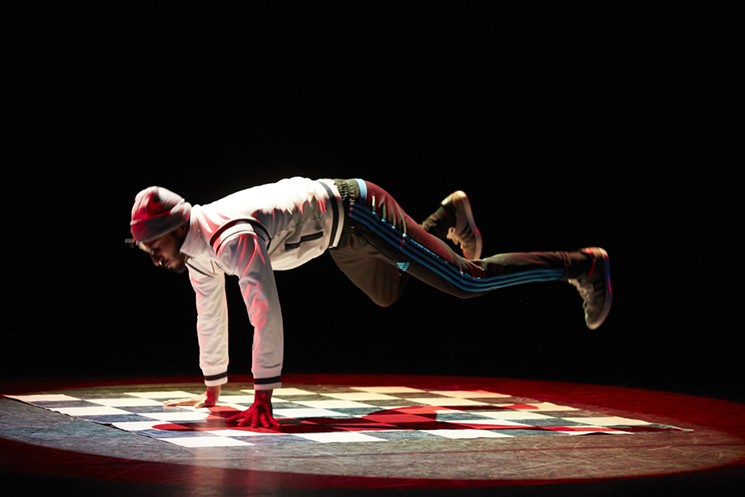 See Julio U. Medina perform during Breaking Ground 2018 in Tempe.
Courtesy of Carley Conder
Breaking Ground Dance and Film Festival
Several years ago, Carley Conder launched the Breaking Ground Dance and Film Festival that’s become an annual staple of the Phoenix dance scene. Conder is artistic director for Conder/DANCE, a Tempe-based company that specializes in contemporary dance. Her festival returns to Tempe Center for the Arts, 7000 West Rio Salado Parkway, at 7:30 p.m. on Friday, January 19. But, there’s a new twist.

During the first evening of a two-night festival, attendees will see eight dances and one dance film. Expect hip-hop, yarn, Bach, and psychology, among other things. If you love Friday’s show, go back Saturday, January 20, to see more dancers in motion, performing a different bill of works. Advance tickets each night are $25 for adults. Visit the Conder/DANCE website. Lynn Trimble

Shhhhh.
Benjamin Leatherman
Silent Party
Silent parties are a thing. Sure, those two words don’t seem to make sense together, but for those who whine about parties being too loud to have a decent conversation, these events are on the money. This Silent Party, hosted by Urban Fêtes, might be your new jam.

Here’s how it works: When you get to the club, you receive a pair of wireless headphones that allow you to switch between three different DJs playing reggae, R&B, hip-hop, and Top 40 faves. You’re also in control of the volume, making it easy to jump between dancing and chatting.

Ran
Ran is the final saga by legendary Japanese director Akira Kurosawa. The filmmaker put his heart and soul into this ambitious and visually powerful award-winning 1985 film, which is a modern retelling of Shakespeare’s King Lear. Generations clash for power when a 16th-century warlord gives up his throne to his three sons.

Admission to the 7 p.m. screening is $7. For more information, visit the Scottsdale Center for the Performing Arts website. Jason Keil

Alan Austin and Vanessa Benjamin are Trying.
Mark Gluckman
Trying
Francis Biddle was one of FDR’s attorneys general and later presided over the Nuremberg trials. He embraced positions during wartime that he repudiated later (better late than never). During his long, productive retirement, he had trouble retaining personal secretaries, due to a trait known as “cussedness.” The final assistant, a young Saskatchewanian named Joanna McClelland Glass, eventually wrote a play, Trying, about her years working with Biddle in the 1960s.

The two-person show, at Theatre Artists Studio through Sunday, February 4, isn’t just about yelling and filing. Explorations of aging and communication will suck you in, even if super-lawyers aren’t your thing.

The science behind the sound.
Courtesy of MIM
Discover Science: How Science Brings Music to Life
When you’re rocking out to your favorite tunes, you probably aren’t thinking about how science is involved. No worries, the folks at the Musical Instrument Museum thought about it for you.

The two-day event Discover Science: How Science Brings Music to Life will feature workshops, hands-on activities, lectures, and performances to examine how science and technology influence how music is created and heard. Make your own electronic music at a workshop hosted by AZ Beat Lab or watch the B1 Duo explore the sounds made by different metal objects. There’s also a photo booth with music- and science-themed props, to memorialize the day.

Veg out.
AZ Veg Food Fest
Arizona Vegetarian Food Festival
Living a plant-based lifestyle is about more than just what you eat. The U.S. Veg Corp’s Arizona Vegetarian Food Festival on Saturday and Sunday, January 20 and 21, will present different facets of veganism through chef demos of various cuisines, guest speaker discussions, storytellers, arts and crafts, and vendors with innovative vegan food and beverages, beauty products, and clothing and accessories.

During the festival, attendees can participate in yoga and meditation sessions or take in performances by acoustic, pop, hip-hop, and country musicians. The event takes place from 10 a.m. to 5 p.m. each day at Scottsdale Civic Center Amphitheater, 7380 East Second Street. Tickets are $20 for general admission, $75 for VIP, and free for children 10 and younger. For more information, see the Arizona Vegetarian Food Festival website. Laura Latzko