Funnyman Felipe. Courtesy of Stand Up Live
Reschedule your Netflix binge, because you have stuff to do this weekend. Like? Gallivanting in a wedding gown at Brides of March, celebrating the first Flying Burrito Festival, or getting dramatic at the The Barber of Seville. For more things to do, visit Phoenix New Times' calendar.

Felipe Esparza
Felipe Esparza took a solid move from the comedian’s playbook: He cataloged the adversities he’s faced — including drug addiction and gang life — and turned them into humorous subject matter to entertain the masses.
Esparza pursued his career for 16 years before catching a great break. He was the 2010 winner on NBC’s Last Comic Standing. He’s had recurring roles on different TV shows, like Superstore and The Eric Andre Show. And, of course, he has his own podcast. It’s called What’s Up Fool?

The comedian takes the stage at 7:30 p.m. on Friday, March 9, at Stand Up Live, 50 West Jefferson Street. Admission is $25 for guests 21and older. Attendance requires a two-drink minimum. Esparza has sets scheduled at the club through Sunday, March 11. Call 480-719- 6100 or visit the Stand Up Live website. Amy Young

It’s one of two plays in development that you can catch at 100 East McDowell Road as part of the Phoenix Theatre Festival of New American Theatre on Friday, March 9. The finished piece will be part of the theater’s 2018-19 season.

The other is Sheila Cowley’s The Burlesque Astronomy Play, which blends art and science while exploring “the challenges women face when balancing career and femininity,” according to festival materials.
Showtime is 7 p.m., and tickets are $10. The festival continues through Sunday, March 18. Visit the Phoenix Theatre website. Lynn Trimble 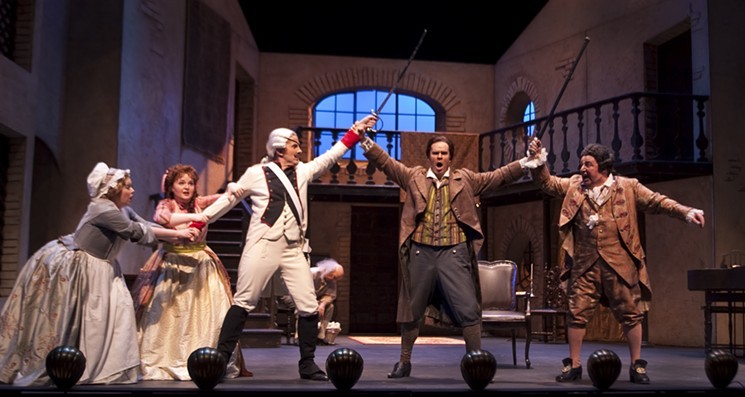 Expect operatic high-jinks to ensue.
Arizona Opera
The Barber of Seville
If your knowledge of The Barber of Seville goes as deep as Bugs Bunny and Elmer Fudd chasing each other to the overture of Gioachino Rossini’s greatest work, the time to change that is now. The Arizona Opera presents the two-act comedy about a barber who’s been enlisted by a lovelorn count to convince Rosina, the object of the count’s affection, to fall in love with him. Operatic high-jinks ensue.

Get lasered up.
Courtesy of Arizona Science Center
Lasers and Liquors
Taking in a planetarium show isn’t just for kids on a field trip. During the Arizona Science Center’s Lasers and Liquors, you can experience your favorite Pink Floyd music in synchronization with a light show. The Friday, March 9, event will offer a show dedicated to Dark Side of the Moon at 8 p.m. and The Wall at 9:30.

Doors will open at 6 p.m. at 600 East Washington Street. Snacks, beverages, and cocktails will be available for purchase. The shows cost $10 each for adults and $8 for members and students. For more information, call 602-716-2000 or visit the Arizona Science Center website. Laura Latzko

Live your best life when you gather with other food and music fanatics for a day packed with bands and burritos. Music is coming to four stages, and the diverse lineup features locals and acts from all over the world. There’s Albert Hammond Jr., No Age, Los Chollas Peligrosas, Porches, and La Luz, to name a handful.

More than 15 vendors will be on-site with full-size burritos and samples. Expect local spots like Cocina 10, Chico Malo, Ladera Taverna y Cocina, and Elote Man AZ to give you plenty of delicious options for stuffing your face.
This rollicking party starts at 4 p.m. on Saturday, March 10, at Crescent Ballroom, 308 North Second Avenue. Admission is $12. For access to the festival and an 18-and-over after-party at The Van Buren, you’ll pay $27. Call 602-716-2222 or visit the Crescent Ballroom website for details. Amy Young

Here come the brides.
Benjamin Leatherman
Brides of March
It’s estimated that approximately 2.3 million weddings take place in the U.S. each year, according to folks who keep track of such things. We’re willing to bet, however, that the majority of these blessed affairs are nowhere near as fun as the madcap matrimonial fun of the annual Brides of March bar crawl.

Organized by the gonzo pranksters of the Arizona Cacophony Society, the annual event involves men and women alike donning wedding and bridesmaids dresses while hitting up several bars in downtown and Central Phoenix. It’s an afternoon of goofy fun that spoofs bridal traditions and riffs off the Ides of March (hence the name).

This year’s crawl kicks off at noon on Saturday, March 10, at Charlie’s Phoenix, 727 West Camelback Road, with a high-heel race and other festivities. Patrons will then board the light rail and set off for other nearby bars.
Participation is free. Visit the Arizona Cacophony Society website for more info. Benjamin Leatherman

Peep the cute-as-hell little dwellings and their fittings, meet the builders, get your snack on, and groove to live entertainment. Art for kids, art vendors, and demos of all things micro (including gardens and our friend beer) round out the action.

Gail Carriger is ready to take a book.
Vanessa Applegate
Tucson Festival of Books
Over 100,000 readers and writers will descend on the Old Pueblo this weekend for the Tucson Festival of Books. Now in its 10th year, the event takes over the University of Arizona campus on Saturday and Sunday, March 10 and 11, with readings, workshops, lectures, and signings from some of the biggest writers in the world.

Programming runs from 10 a.m. to 5 p.m. daily. Admission is free, however some of the programs are ticketed. Visit the Tucson Festival of Books website for a complete schedule and to reserve tickets. Michael Senft 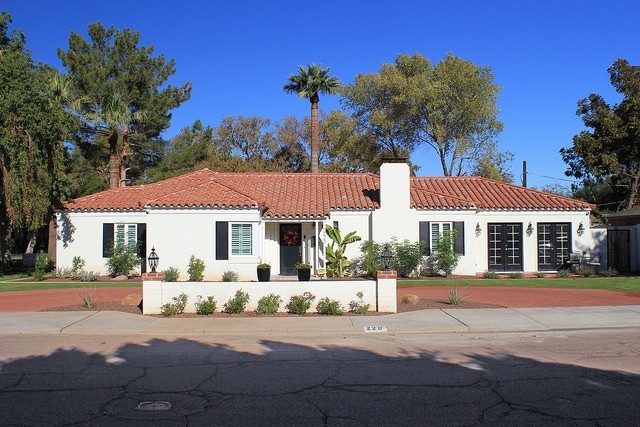 Home Sweet Home tour.
Barry Oleksak
Windsor Square 2018 Home Tour
You may have driven through the curvy streets of the Windsor Square historic neighborhood in north central Phoenix and never known its rich history. For example, this 260-home ’hood was established in 1929.

The Windsor Square 2018 Home Tour can help you get to know this area, inside and out, through 12 featured homes. You’ll see a mix of new design trends and old architectural styles. Peruse goods from arts and crafts vendors, hear live music, and quench your thirst in the beer garden. Food trucks will be on-site for hungry explorers.

It’s an urban adventure from 11 a.m. to 4 p.m. on Sunday, March 11, at the Windsor Square Historic District, north of Camelback Road between Central Avenue and Seventh Street. Tickets are $20 at the event, or $17 in advance online. Kids 12 and younger get in free. See details at the Windsor Square website. Amy Young 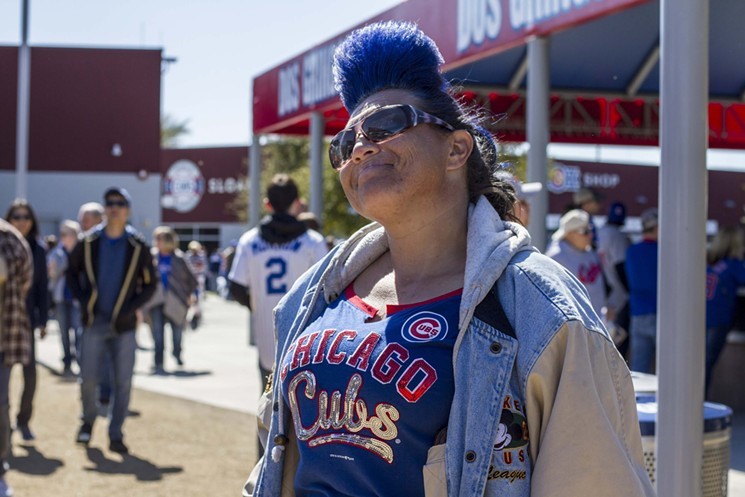 A dedicated Cubs fan sports blue hair.
Barry Oleksak
Rockies v. Dodgers
Not that any seasoned Phoenician is complaining about the cooler weather we’ve enjoyed recently, but it does feel a little strange packing a parka for a spring training outing instead of sunscreen. Regardless of weather, the Cactus League is in full swing.

If you haven’t yet done your part in bolstering the local economy by drinking beer and watching baseball, then consider this your summons. The boss isn’t buying it? Try a weekend game instead.

A Sunday afternoon matchup between the Rockies and the Dodgers at Scottsdale’s Salt River Fields, 7555 North Pima Road, on March 11, should deliver plenty of sunshine and star power. Game time is 1:10 p.m., and tickets are $22 and up. Visit the Cactus League website or call 480-270-5000 for details. Rob Kroehler