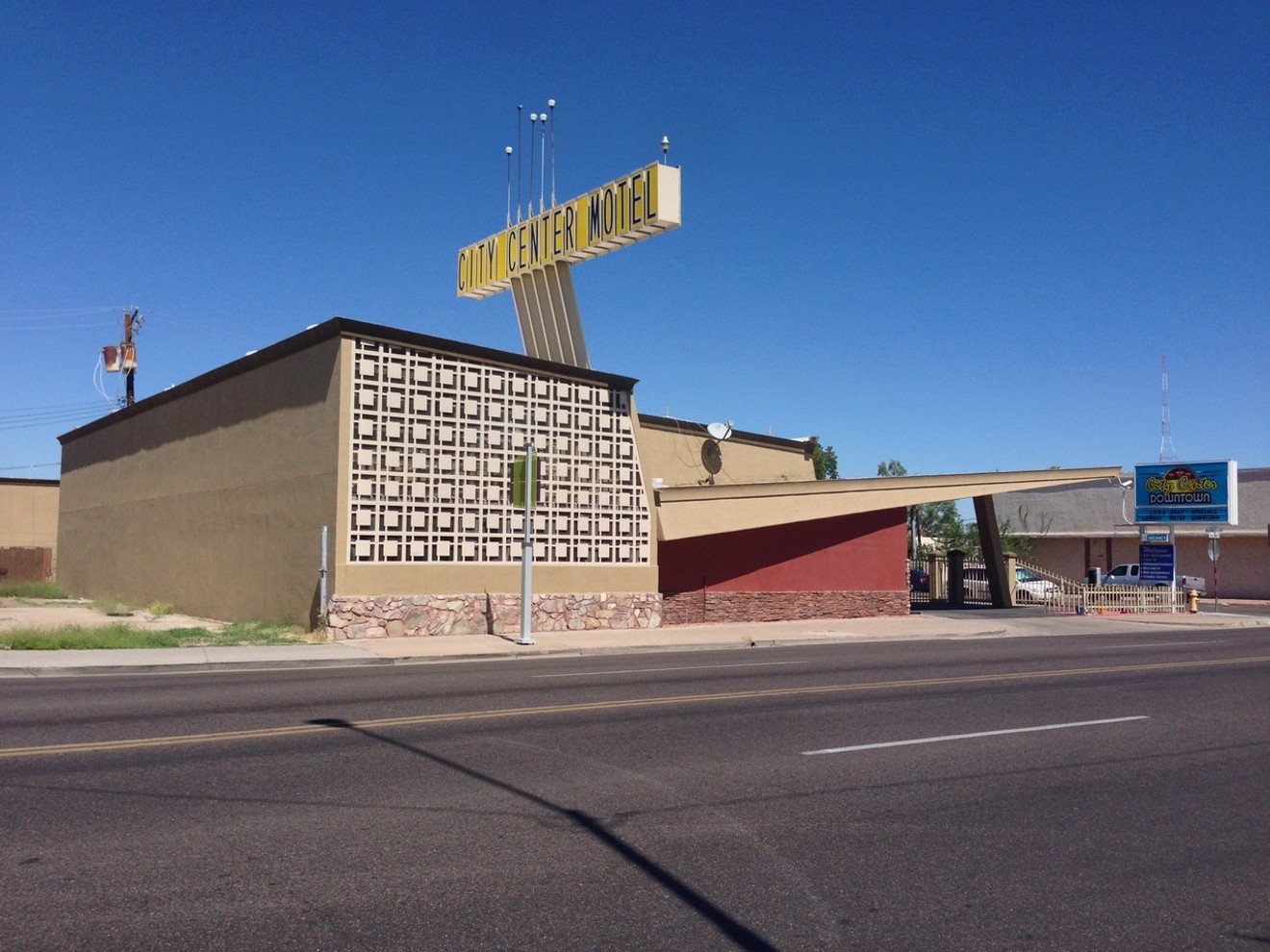 The building is located at 600 West Van Buren Street, near a strip of Grand Avenue renowned for its offbeat arts and culture, plus historic preservation efforts. Together with an annex, it once formed a travel destination called the City Center Motel, which was built with space-age Google design elements including a distinct angular porte cochere that juts out near the entrance. 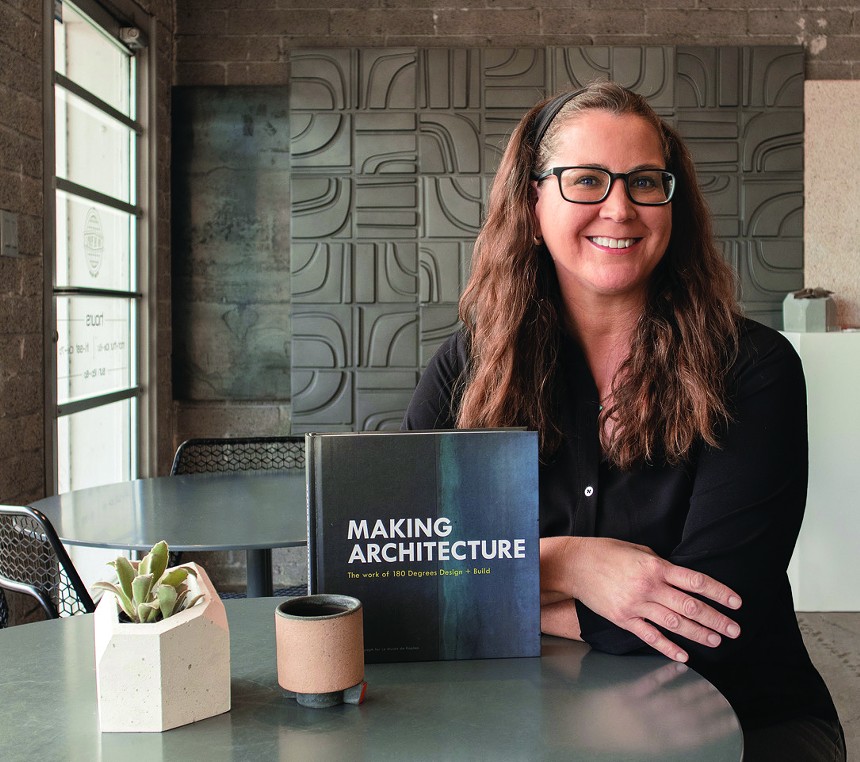 Modern Phoenix co-founder Alison King with her book Making Architecture.
Samuel Ybarra
“It’s one of the last remnants of the original use of that thoroughfare,” says Modern Phoenix founder Alison King. “That motel stands as an artifact of what Phoenix was and what it stands for.” The bright yellow deinstalled sign for the former motel is being temporarily stored in her backyard, by the way.

According to city records, "the main building appears to have been originally designed by Bauer & Associates, who submitted plans to the city of Phoenix in 1958." Records also indicate that the city's historic preservation office has recommended both properties as eligible for inclusion in the Phoenix Historic Property Register.

Today, the buildings form a Travelodge hotel, where owner Nimesh Dinubhai says he’s working with the city to provide lodging for homeless people. But that’s just a temporary arrangement, because he recently applied for a demolition permit, and he's working with a hotelier to bring a new concept to the site.

Ken Patel, founder and CEO for Atlanta-based EV Hotels spoke with Phoenix New Times about his concept by phone on December 22, indicating that he expects the project to take 12 to 14 months to complete — at a likely cost of $25 to $27 million.

The concept has a technology focus, with specific elements such as robots, cryptocurrency, and a limited number of NFT rooms, according to Patel. There’s a website with additional details about the EV Hotels concept, but no specific plan has been filed with the city to date. Patel says the hotel will have 124 rooms, with pricing that could range from $149 to over $40,000 a night. The Travelodge as it looks today, complete with a mural of Chef Silvana Salcido Esparza.
Lucretia Torva
Several downtown advocates want to halt the demolition of the existing buildings and persuade the developers to incorporate at least the main building into the new hotel’s design. Those advocates have taken concrete steps towards that end, including contacting city officials and speaking at a recent meeting of the city’s historic preservation commission.

The city has to hold demolition permit requests for 30 days to allow members of the public to weigh in. Michelle Dodds, historic preservation officer for the city, notes that she received more than 50 emails about saving the motel by early this week.

Stacey Champion posted her objections to a possible demolition on her Facebook page, then spoke during the virtual commission meeting held on Monday, December 18. So did several additional people who opposed plans to demolish the motel. Community members eager to preserve the building include artist Lucretia Torva, who painted the mural of Chef Silvana Salcido Esparza at the site.

It looks like their efforts succeeded, because the property owner agreed to pause his demolition request and the commission voted during that meeting to begin the process of putting a historical overlay on the property. Once that process begins, Dodds' office has to deny demolition permit requests.

But there’s a caveat, because Dodds notes that even a historic preservation overlay can only protect a property for one year, unless the city designates a building as “significant,” as it did with the David and Gladys Wright house in Arcadia. Even then, the protection only buys a three-year window of time for advocates who want to persuade developers not to demolish a property.

What happens next will depend how that historic overlay process moves forward, and whether developers alter their plans so the main building becomes part of the new hotel instead of being destroyed.

New Times spoke with Patel as well, but he took a different position. “I’m not going to say yes or no,” he said. “I have no idea what they’re asking; I only found out about this 48 hours ago.” According to Patel, the architectural firm they're working with is New York-based Mancini Duffy.

Clearly, advocates will be seeking more clarity, and a concrete design plan for the hotel. And many, like King, will continue urging others to get involved in coming days and weeks. She's already posted a statement on Facebook, thanking people who've supported the cause this week.

“This is a vulnerable period for the buildings, so people need to stay engaged,” says King, who has specific tips for those who want to help preserve them.

“In transition times like these, it’s a good idea to have eyes on the street and people looking out for any changes at the site,” King says. She’s also encouraging people to weigh in during the next historic preservation meeting, which happens on January 10, 2022.

“It’s okay to show your passion,” says King, “but it’s important that we both listen and speak, because we want to think critically while also showing compassion instead of just getting angry.”
KEEP PHOENIX NEW TIMES FREE... Since we started Phoenix New Times, it has been defined as the free, independent voice of Phoenix, and we'd like to keep it that way. With local media under siege, it's more important than ever for us to rally support behind funding our local journalism. You can help by participating in our "I Support" program, allowing us to keep offering readers access to our incisive coverage of local news, food and culture with no paywalls.
Make a one-time donation today for as little as $1.