The site of the soon-to-open Central Records in downtown Phoenix. Benjamin Leatherman
When the COVID-19 pandemic turned everything inside out for the better part of two years, the music world saw projects large and small alike sidetracked or completely upended. Just ask Jake Stellarwell and others involved with the Valley’s Recordbar Radio, who had their plans to open local music and cultural hub put on hold.

Now, more than two years later, Stellarwell tells Phoenix New Times they’re finally getting things back on track with the project, which is now known as Central Records. The new business, which Stellarwell describes as a combination record store, radio studio, performance venue, art gallery, and cafe, is set to open later this fall along Central Avenue near Garfield Street.

Its creation is a culmination of three years of work, which included a lot of what Stellarwell, a local promoter and DJ, calls “frustration, sacrifice, and compromise.” The genesis of the project, which was originally known as Recordbar, came in late 2019.

Jake Stellarwell is one of the local artists behind Central Records.
Recordbar Radio
“Essentially, to put into perspective what we're working on now [differs] from what we originally set out to do,” he says. “At the outset, I was originally trying to open was a comprehensive cultural hub incorporating a record [shop], studio, and other elements in a single space.”

It was similar to similar hybrid performance/retail spots in other cities, like Chicago’s Co-Prosperity and Spot Lite in Detroit. Envisioned as a Phoenix version of such businesses, Stellarwell began working on the project in earnest.

“Some of the individuals who were involved at that point just couldn't stomach it and pulled out,” Stellarwell says. “So it significantly diminished what the potential was in terms of investment and those of us who did decide to stick with it had to think on our feet about what to do next.”

The result was Recordbar Radio, a streaming platform showcasing performances by local DJs, musicians, and bands that took place out of a small studio and retail space located near 16th Street and Monte Vista. Livestreaming local artists was originally supposed to be one aspect of the project, Stellarwell says, but soon became its calling card.
Over the pandemic, Recordbar Radio streamed hundreds of sets by a vast lineup of local selectors, beat-smiths, and turntablists via its YouTube channel, including such scene legends as Djentrification and Pete Salaz, downtown Phoenix favorites like Davina and Pootiecat, and oddities like electronic artist Terminal 11 and crate-digger Gila Man. Local musicians like saxophonist Johnny Butler, vocalist A. Billi, and indie band Meet the Sun also performed.

Recordbar Radio not only helped bring local music to the masses during the darkest days of the pandemic, Stellarwell says it also helped sustain the overall project.

“It really helped get us through everything,” he says.

Fast-forward to today, and Recordbar Radio is still going strong. Meanwhile, Stellarwell and others involved with the project have spent the past six months getting Central Records ready to open.

Its 1,600-square-foot space is ideally located near Roosevelt Row in downtown Phoenix and Stellarwell says they were “lucky to get it.” It’s location also led to a new name for the project.

“We found this great space and it was perfect. It had all the bones that we needed to do what we’ve been wanting to do,” he says. “And because of location … we decided to rebrand the concept a little bit. So it’s called Central Records since it's on Central and Garfield.
click to enlarge 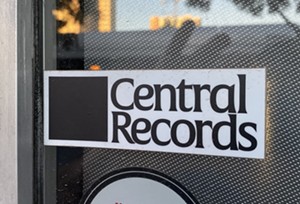 A Central Records sticker on the door of its downtown Phoenix location.
Benjamin Leatherman

They’re aiming to officially open Central Records in either November or December, Stellarwell says. Recordbar Radio sessions will take place in a glass-enclosed 400-square-foot studio that will be a centerpiece of the place. Elsewhere, there will be shelves stocked with books and music, as well as separate areas for drinking and dining.

Stellarwell likens the business as being similar to First Draft Book Bar, the drinkery located inside the central Phoenix location of Changing Hands Bookstore.

“Basically, the studio's right in the middle of the [space], and then behind it is the bathroom and the kitchen and then in front are the dining room and retail area,” Stellarwell says. “It's going to be a pretty interactive situation. All of the performances and shows being broadcast from inside the studio will be heard from overhead speakers inside the dining room [and] retail showroom. It's a unique concept; definitely not happening anywhere in the southwest region of the country.”

Stellarwell says Central Records will feature everything they did at the Recordbar Radio location they operated on 16th Street during the pandemic and will amp it up.

“We were running an online record store and all of our events and performances out of there. We had quite a bit going on there and didn’t need that big of a footprint,” he says. “We’re taking what we did there and doing it better.”
KEEP PHOENIX NEW TIMES FREE... Since we started Phoenix New Times, it has been defined as the free, independent voice of Phoenix, and we'd like to keep it that way. With local media under siege, it's more important than ever for us to rally support behind funding our local journalism. You can help by participating in our "I Support" program, allowing us to keep offering readers access to our incisive coverage of local news, food and culture with no paywalls.
Make a one-time donation today for as little as $1.