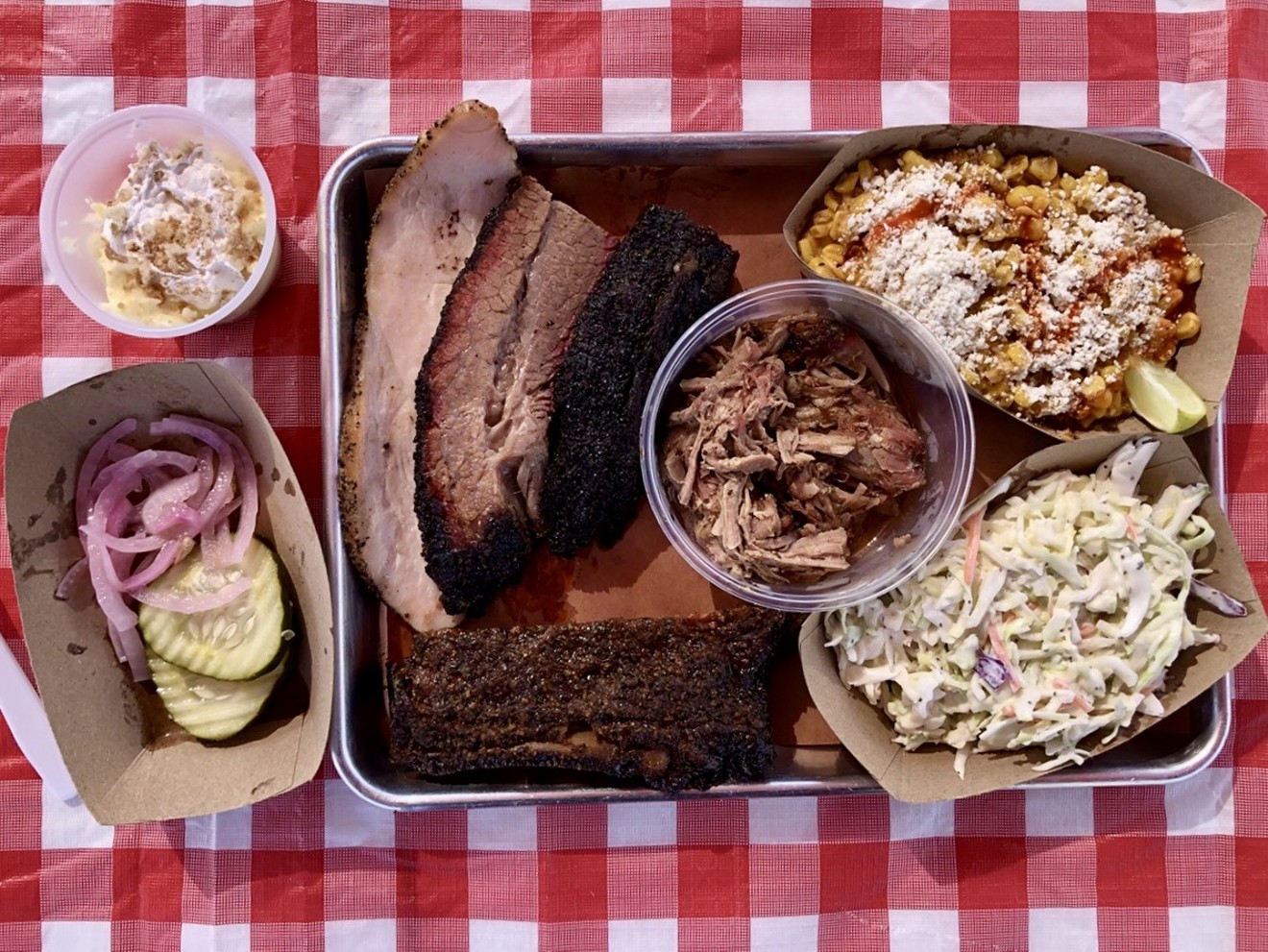 Four meats, two sides, pickles, and banana cream pudding from Eric's Family Barbecue. Chris Malloy
Already, just three weeks in, Eric’s Family Barbecue in Avondale is smoking some of greater Phoenix’s best barbecue. This is joyful news for the west Valley, where you can find great barbacoa — like the lamb barbacoa from La Mejor Barbacoa or the octopus barbacoa from Los Arbolito De Cajeme — but where great American-style barbecue has been elusive. Not anymore. Eric’s is one of the west Valley’s first top-tier barbecue spots.

Eric’s has a heavy central Texas slant, just like Little Miss BBQ. Brisket is rubbed with salt and pepper, papered later in the cooking, and alchemized in offset smokers. White bread comes on trays. Meat comes naked. You can score beef rib on Saturdays. 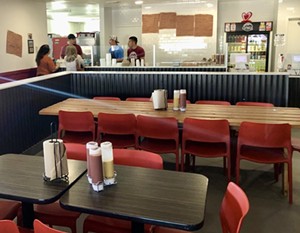 Mesquite is a rarity on the Arizona barbecue circuit, where operators tend to prefer milder pecan or oak. When cooks do use mesquite, they usually cut it with a less-pungent wood to target a more neutral flavor. “Everyone tells me to use pecan, hickory,” says Eric Tanori, who works the smokers. “And I’ve tested them. But I grew up using mesquite charcoal for carne asada and that flavor is kind of ingrained in me.”

With wood, as in other areas, Eric’s goes its own way.
Inside, a lane left of tables funnels you to an ordering counter; walls lined with butcher paper are scrawled with the menu. Meats are brisket, pulled pork, sausage, turkey, pork ribs, and beef ribs (again, Saturdays only). Tunes by artists like Jimi Hendrix and Beck ooze through the polished dining room as you chat with Eric, who saws briskets at the cutting station himself, while running from time to time to check on his smokers.

Anthony Garcia oversees the next station, sides, which he makes. Anna Tanori (Eric’s wife) and Casie Garcia (Anthony’s wife) helm everything from social media to marketing to desserts, making Eric’s Family Barbecue a double husband-and-wife operation. All four founders grew up together in Phoenix and Glendale. One smoker has been welded by Fat Stack, a cult favorite artisan in southern California.
Chris Malloy
Fittingly, Eric’s Family Barbecue grew out of backyard cookouts. “I was just a normal guy who fell victim to this addiction to barbecue,” Eric says.

He developed his style from eating barbecue on trips to places like Texas and from digital research. “It’s mainly been Instagram-scrubbing for tips as I [smoked meat] in my backyard,” he says. “I followed all the major smokehouses in Texas, then the little ones as well. Then I started following people in California, Colorado, all over the country.”

When he upgraded to a 500-gallon Texas-style offset smoker, he started having friends over as he honed his techniques. For the four founders, Eric’s is an extension of these events. “We’re longtime friends,” Eric says. “Anthony and I went to middle school [together] and were friends then. It’s just a bunch of friends who decided to expand their backyard barbecue.” 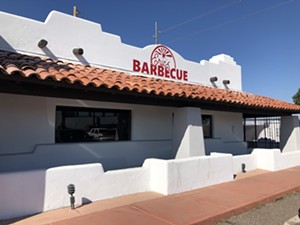 The newly opened Eric's Family Barbecue in Avondale.
Chris Malloy
At a backyard barbecue, though, you aren’t likely to find firepower like the two smokers Eric uses. These, puffing away out back behind Eric’s Family Barbecue, are what augur potential barbecue greatness.

One smoker is a 1,000-gallon offset from Dripping Springs, Texas. More telling, the other is the star around which those former backyard cookouts orbited: a 500-gallon white propane tank, lightly streaked with rust and sun-faded, welded into an offset by Eric Wech of FatStack Smokers, a cult favorite in southern California. Big offsets like these bring the heights of barbecue within reach.

The brisket at Eric’s is thickly cut, as thickly as any other I’ve had in the Valley. This creates a trace of steaky heft with no loss of top-notch, eye-widening dissolve. A nutty stripe of fat runs through. Vivid smoke rings tunnel past bark so generous, textured, and black that an end slice looks like an oblong mountain home to a dark lord.

Already, this brisket is in the top echelon of briskets in town. And the pork ribs might be even better.

These are full spareribs, long and meaty. Their rub is far more maximal than the spartan brisket rub, with paprika and cayenne lending some cool pepper sizzle. Assertive heat shines. A sultry mesquite-pungent smoke spreads deep under bark and toward bone. Rib meat is packed with flavor and tender, more so than ribs done competition-style, but measuredly short of pure baby-back fall-apart softness. 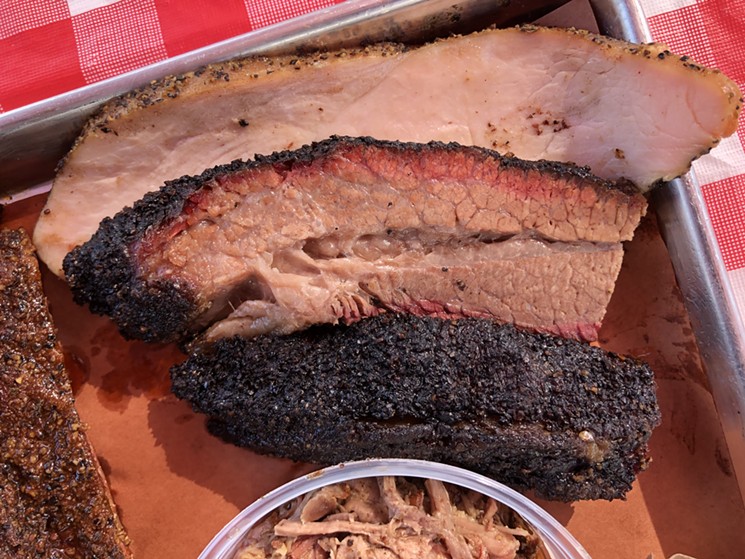 Slabs of fatty brisket are striped with fat and colored with a vivid smoke ring.
Chris Malloy
The other meats I tried were also nicely smoked. Turkey gets a minimal rub of salt, pepper, and garlic, then, later, a little butter au jus. It's juicy in a way surprising for a long-smoked lean meat. The pulled pork, too, is worth some real estate on your cafeteria-style tray. Eric serves pork in a plastic container, that way shreds soak in juices, keeping pork heady and juices from streaming all over your tray.

But I have tried the elote. They are pure dynamite, destined for the Arizona barbecue side hall of fame. A banana pudding that makes use of Nilla Wafers is a nice way to finish. Especially outside on the patio, mopping meats through a mustard sauce and two well-balanced, tomato-heavy barbecue sauces — sauces you don’t need, but might try anyway. 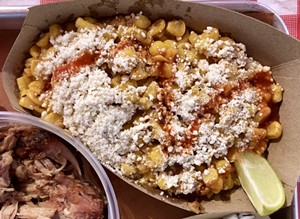 The elotes are pure dynamite.
Chris Malloy
Eric’s Family Barbecue is already doing big things in the west Valley. Eric plans to do “rotating random specials.” He hopes to roll out house-made tortillas for barbecue tacos. He’s hard at work on a nacho recipe. It will be interesting to see how this place grows, how those homemade tortillas find a place on the menu, how the specials evolve.

Soon, too, there will be beer. Macros like Coors and Tecate, maybe even micros like staples from Avondale’s own 8bit Brewing Company. They’ll enhance what might be the spot's greatest strength — that when the music, patio sunshine, and ribs hit your mind right, Eric's feels a lot like a backyard, but better.

Eric's Family Barbecue
12345 West Indian School Road, Avondale
623-248-0148
Hours: 11 a.m. to 8 p.m. (or sold out) Wednesday to Sunday; closed Monday to Tuesday
KEEP PHOENIX NEW TIMES FREE... Since we started Phoenix New Times, it has been defined as the free, independent voice of Phoenix, and we'd like to keep it that way. With local media under siege, it's more important than ever for us to rally support behind funding our local journalism. You can help by participating in our "I Support" program, allowing us to keep offering readers access to our incisive coverage of local news, food and culture with no paywalls.
Make a one-time donation today for as little as $1.
Chris Malloy, former food editor and current food critic at Phoenix New Times, has written for various local and national outlets. He has scrubbed pots in a restaurant kitchen, earned graduate credit for a class about cheese, harvested garlic in Le Marche, and rolled pastas like cappellacci stuffed with chicken liver. He writes reviews but also narrative stories on the food world's margins.
Contact: Chris Malloy
Follow:
Twitter: @yollamsirhc
Instagram: @malloy_chris/