Arizona Restaurant Week is Back. Here Are The 7 Most Exciting Menus to Try With 150 participating restaurants, there are an overwhelming amount of inventive eateries to choose from this fall. To help you narrow it down, here are our top picks. 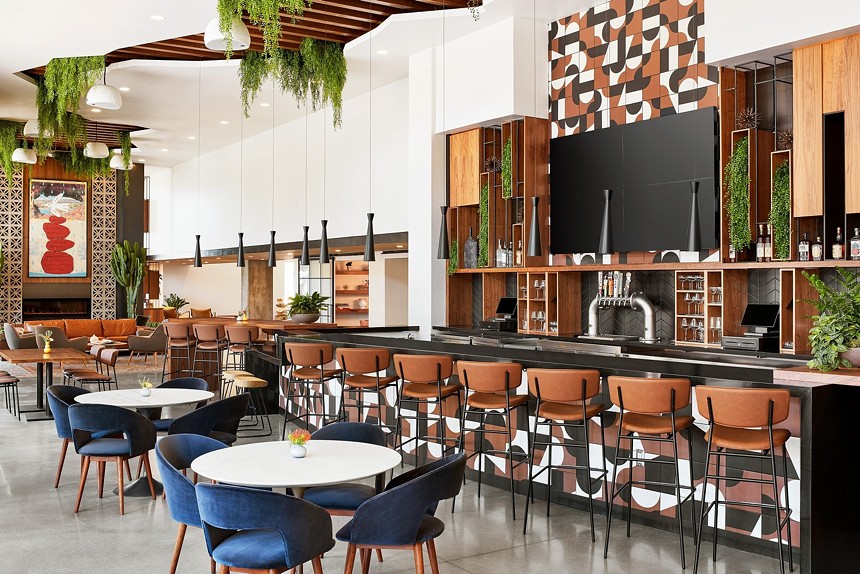 The interior of Alter Ego.
Canopy by Hilton Tempe Downtown


108 East University Drive, Tempe
$55 per person
602-612-7871
Don't let the fact that Alter Ego hails from the ground floor of the Canopy Hilton in Downtown Tempe at Mill Avenue and University Drive deter you from dining there. The lineup, dubbed "A Rainy Day in Spain," should be delicious enough to hold your attention. Start with some Spanish charcuterie or Panzanella, a chopped bread salad with roasted peppers, anchovies, and a lemon sherry vinaigrette. Entrees range from the Pork Milanesa, a tender cutlet pounded thin, lightly fried, and topped with a sunny-side-up egg, to stuffed red peppers filled with pimento cheese, ancient grain pilaf, and basil pesto.

And dessert stays just as interesting at the light-filled restaurant with a modern Southwest ambiance. Orange olive oil cake, toasted almond flan, and cinnamon sugar rosquillas, Spanish doughnuts topped with chocolate sauce, are all on the menu.


15301 North Scottsdale Road, Scottsdale
Lunch: $44 per person
Dinner: $55 per person
480-939-4444
This is Etta's first year participating in Arizona Restaurant Week, but that certainly doesn't mean that the menu is unseasoned. The four-course dinner experience at the Scottsdale Quarter restaurant begins with fire-baked focaccia bread served with a ricotta, honey, and black truffle dipping sauce. But don't fill up just yet.

The dinner menu features starters including Bubbling Shrimp with chiltepin, a spicy and pungent pepper, smoked tomatoes, and mint, and Rack-Roasted Oysters served with smoked tomato butter. Add a wood-fired pepperoni or Margherita pizza before the main course for an additional $20, or head straight for the entree.

Cacio e Pepe, a classic Italian pasta with pecorino Romano and plenty of pepper, is one of the mains, in addition to Casarecce Bolognese, a handmade pasta dish with parmesan fondue. Wood-Fired Chicken and Fire-Seared Branzino are also on the menu. For dessert, choose between chocolate cake, a cannoli ice cream sandwich with ricotta ice cream, roasted pistachios, and shaved chocolate, or the Celebration Shot, a birthday cake cookie with a coffee-tequila backer.

Lunch is just as appetizing as dinner, with the focaccia or meatballs with herbed yogurt as starter options. Pizza can still be added on, while entrees include the Cacio e Pepe and Casareece Bolognese, plus a crispy chicken sandwich, French dip, and an Italian chopped salad with marinated tomatoes, pepperoncini, salumi, and marinated olives. Try the buñuelo, fried dough fritters with cinnamon sugar and a "warm and boozy" chocolate sauce, for dessert. Stephen Jones of the Larder + the Delta.
Chris Malloy

The Larder and the Delta


200 West Portland Street, Suite 101
$44 per person
480-409-8520
This Downtown Phoenix staple normally brings the goods, and its offerings for Restaurant Week are no different. The Larder and the Delta, led by chef Stephen Jones, a two-time James Beard Award semifinalist, features a three-course menu with two options for both the starter and entree, and one solid dessert.

Kick off the evening with cauliflower with pickled celery, smoked blue cheese, and Cutino's Hot Sauce or Yesterday's Vegetable Beignets with a black garlic peanut romesco sauce. The second course features either a smoked and braised pork collar with hominy, corn, and giardiniera, or Ethiopian fried chicken with chakalaka, a spicy vegetable relish, and charred lime. For dessert at the Southern restaurant, a roasted apple cobbler with French vanilla ice cream and molasses caramel should satisfy any sweet tooth.


3243 North Third Street
$44 per person
602-687-9080
Ocotillo's Restaurant Week meal features three courses from its contemporary midtown Phoenix eatery, with gluten-free, vegetarian, and vegan options as well. The grilled peach appetizer with burrata, tomato confit, and arugula offers a good way to savor the last of the summertime flavors, while the eggplant "meatballs" with polenta, basil pesto, and parmesan are a heartier option. There are three other options in the first course, including tempura squash blossoms and charred sweet potato.

The second course proves to be much more substantial, whether you go for the wood-fired beef ribs with mole espresso barbecue sauce or the Mafaldine, a ruffled pasta with eggplant ragu, roasted tomatoes, olives, garlic crumbs, and vegan parmesan. A beef pasta, grilled chicken, and halibut dish are your other choices. Dessert means either a strawberry shortcake or a flourless chocolate cake with caramelized white chocolate cream.


9800 Talking Stick Way, Scottsdale
$55 per person
480-291-5618
Located inside Talking Stick Resort and Casino, Tash features eclectic, Mediterranean-inspired dishes. There are three options to choose from for each of the three courses at Arizona Restaurant Week, which will be Tash's first time in the lineup.

Start with the Lamb Empanada Mallorca, a tasty turnover also stuffed with feta, olives, kale, and sumac, a deep red tangy spice with a lemony flavor. Or go for The Gambler if veggies are more up your alley, a scorched shishito pepper dish with fried garbanzo beans. Hamachi crudo is another great choice, thinly sliced yellowtail topped with a lime, cilantro, and Aleppo pepper dressing and served with colorful watermelon radishes.

For the main, choose between the skirt steak rubbed in berbere, a spicy, warm, and garlicky herb blend with roasted fingerling potatoes, Pappardelle al Cinghiale, a pasta dish with slow-braised pork ragu and lemon mascarpone, or cast iron-seared sea bass with olives and creamy cannellini beans. 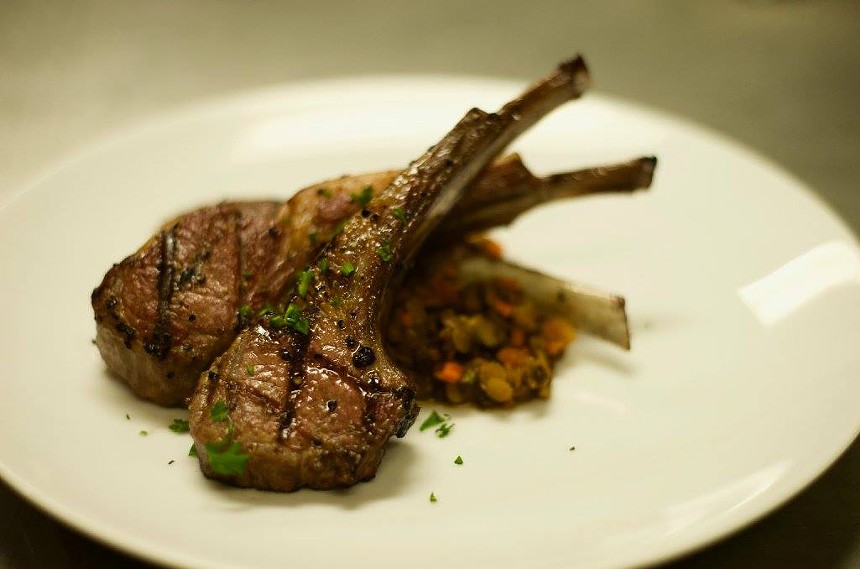 
21067 West Main Street, Buckeye
$55 per person
623-594-6788
At Tempo Urban Bistro, located off of Main Street and Verrado Way in Buckeye, you can choose between three starters, four mains, and three desserts. The contemporary restaurant hails from a master-planned community in the West Valley. 
2 North Central Avenue, Suite 101
$33-55 per person
602-562-3510
This cocktail bar-meets-swanky eatery in downtown Phoenix is filled with striking design elements, substantial sustenance, and taxidermy. The Arizona Restaurant Week menu ranges from $33 to $55 per person, depending on the entree selection.

There are four starters and entrees to choose from at Wren & Wolf, plus an option to add three ounces of Chilean king crab to any main for $25.  Appetizers range from an avocado Caesar to grilled and chilled prawns with Calabrian chili and chive aioli. Entrees feature a wild boar Bolognese, Chilean sea bass, eight-ounce filet, or fried cauliflower with candied pepitas.

Leave a bit of room for dessert as well, as either of the two options should satisfy. The BBC is a bourbon butter cake with banana ice cream, bourbon caramel, and candied pecans, while the Lime Suspiro is a Peruvian caramel-like pudding dessert with Arizona citrus.
KEEP PHOENIX NEW TIMES FREE... Since we started Phoenix New Times, it has been defined as the free, independent voice of Phoenix, and we'd like to keep it that way. With local media under siege, it's more important than ever for us to rally support behind funding our local journalism. You can help by participating in our "I Support" program, allowing us to keep offering readers access to our incisive coverage of local news, food and culture with no paywalls.
Make a one-time donation today for as little as $1.