Now Open: Medieval Times in Scottsdale — Here's Everything You Need to Know 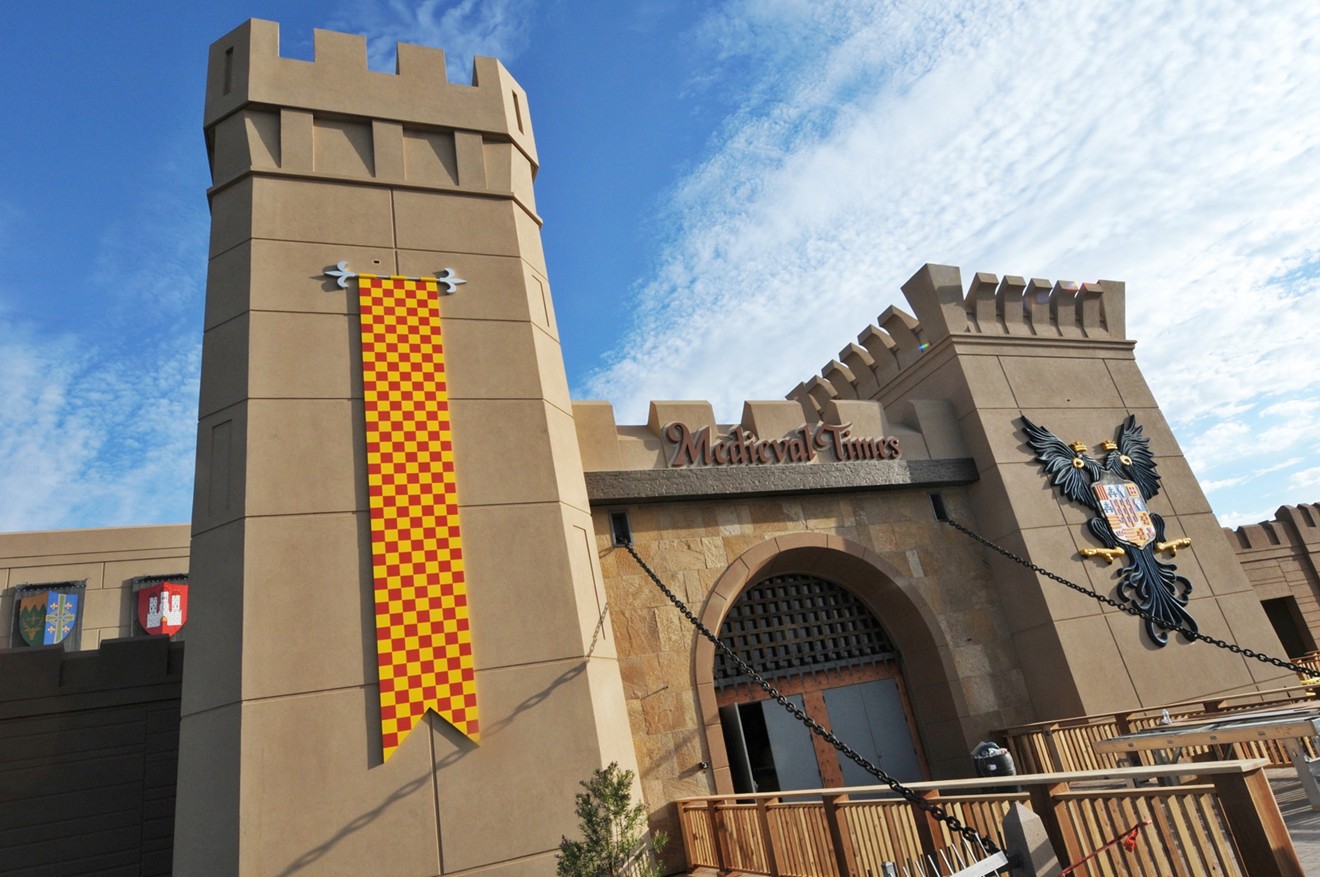 The exterior of Medieval Times in Scottsdale. Benjamin Leatherman
Lords and ladies of the Valley, get ready to party like it's 1099. The much-anticipated Medieval Times location in north Scottsdale opens this week, giving local folks the chance to feast on roasted chicken with their bare hands, wear paper crowns, and watch brawny knights fight to the death. Huzzah!

The kitschy theme restaurant and dinner theater, which is located on Vía de Ventura near the Loop 101 in Scottsdale, will officially open to the public on Friday, August 2, offering old tyme fun five nights a week — Wednesday through Sunday.

And the masses are likely to flock to the location, which resembles a medieval-style castle, to enjoy an evening of jousting thrills, equestrian artistry, mock combat, and a utensils-free four-course meal.

It’s big on spectacle and less historically accurate than your average Renaissance festival, but an entertaining (if pricey) experience nonetheless.

But if your knowledge about Medieval Times is limited to those incredible scenes from The Cable Guy, allow us to enlighten you, knave, with the following guide.

So what’s the deal with Medieval Times? Each location of the Medieval Times chain (there are 10 operating across North America) resembles an 11th-century castle, complete with a moat and drawbridge.

Dinner theater-style shows are offered nightly (see below for the schedule). Each performance is approximately two hours and consists of jousting battles, choreographed equestrian performances, falconry, and various feats of skill. Meanwhile, patrons feast on a four-course meal and watch the show from tiered seating areas that wrap around a jousting arena.

Are there any dragons? Other than on family crests or as decorations, no. You’ve watched too much Game of Thrones.

Is this stuff popular? Yep. The Medieval Times chain does big business, pulling in an estimated 2.5 million patrons each year.

Where is the Valley one located? It’s at 9051 East Vía de Ventura in Scottsdale, just west of the Loop 101 freeway.

So why did they open one in Scottsdale? Medieval Times locations tend to be near tourist hot spots. The Scottsdale location is in close proximity to Talking Stick Resort, Salt River Fields, OdySea Aquarium, and a bunch of other tourist-friendly attractions. We’re betting that tons of people will stop by Medieval Times during the Cactus League's spring training.

How early should I show up? Doors open approximately 75 minutes before the start of each show. Seating is available on a first-come, first-served basis. In other words, early birds will get the best spots.

Is it free on your birthday? No. While other Medieval Times locations off a “Birthday Fellowship” e-mail club, which gives patrons a free admission on their big day with the purchase of a full-priced adult ticket, Scottsdale does not participate in the program.

Are military discounts available? Yes. Active military can get discounts through the Troop ID service provided by ID.me. Details can be found here.

Do they have other discounts? Only if you are in a large group of 15 people or more. See this page for more details.

Are there VIP packages? Yes. Special upgrades are available when you purchase tickets online and each with its own set of perks. The “Royalty Upgrade,” for instance, is an additional $15 and includes priority access to the castle and first choice of seating, a “cheering banner” and a VIP lanyard.

Another option is the “Celebration Upgrade,” which is an extra $20 and offers all of the aforementioned amenities, plus a group photo, a slice of cake, and the castle’s herald give you a personalized shoutout. The “Queen’s Royalty Upgrade” is $25 extra and features a cheering banner, VIP lanyard, a framed group photo with the cast, and seating in the first or second row center of the arena.

Are there any fees involved for any other stuff at Medieval Times? Yes, since there’s plenty of ye olde up-sell. Pennant flags matching the color of your favorite knight are $5 each, for example, while access to the castle’s “Museum of Torture” (which displays a variety of torture implements used in the middle ages) is $2 per person. Please refrain from making any jokes about “going medieval" on someone’s ass, however.

What else is there to do? There's also a "Hall of Arms" displaying medieval artifacts, a chance to pose for photos with Queen Isabella, and a gift shop (natch).

What are the shows like? Each lasts approximately two hours and features wall-to-wall action and entertainment. Patrons can cheer on one of six different knights as they compete in a tournament to become Queen Isabella’s champion. They’ll participate in such feats of skill as javelin-tossing, lancing hoops on horseback, and jousting. There’s also a falconry show and horses performing dressage and other stunts.

Expect some theatrical elements (including lighting effects, sword fights with sparks, and an epic score playing over the sound system), as well as some plot twists involving intrigue and the queen’s power being challenged. Also, the show ends with knights dueling to the death. 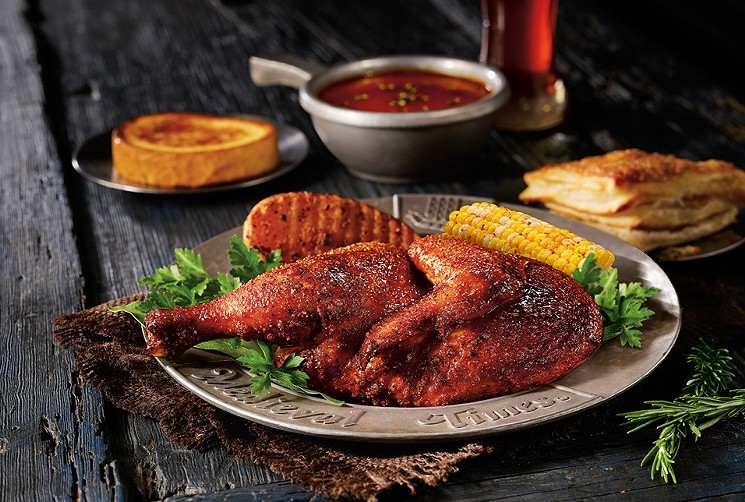 Medieval Times' old-tyme repast, which patrons eat with their hands.
Medieval Times Scottsdale
What’s there to eat and drink? The four-course dinners consist of tomato bisque soup (a.k.a. “Dragons Blood”), sweet buttered corn on the cob, herbed potatoes, a dessert, and half of an oven-roasted chicken. And, as we mentioned before, patrons eat using just their hands. (Wearing the excess chicken skin on your face like Jim Carrey or Hannibal Lecter is optional.)

Vegetarian patrons won’t be left in the Dark Ages, as there’s a meatless meal available that includes a three-bean stew, herb-roasted potatoes, tomato soup, hummus and veggies, and corn on the cob. (Be sure to notify your server upon arriving.)

So that's all that's on the menu? Well, we mentioned the bisque.

What's there to drink? If you’ve been pitched in battle for a fortnight and have a king's thirst, dinners include coffee and two rounds of nonalcoholic beverages, such as soft drinks like Pepsi products, iced tea, or water. There are also frozen slushies for kids and a full bar for the 21-and-over crowd with frosty brews from Huss Brewing, Grand Canyon Brewing Company, and SanTan Brewing on tap.

What’s the deal with that “no utensils” thing? To paraphrase Melinda the Serving Wench (Janeane Garofalo), there were no utensils in medieval times, hence there are no utensils at Medieval Times.

Wait, there were no utensils in medieval times but there was Pepsi and slushies? Dude, it's just a theme restaurant.

Seriously, though, how do you eat soup without utensils? As you can see above, the tomato bisque comes in a shallow bowl with a handle, so we're guessing you can sip from it like a mug or something. Plus, you can always dip your garlic bread.

Can I duel with my friends and frenemies in the arena like Jim Carrey and Matthew Broderick? Absolutely not. Save that for the parking lot.

Medieval Times.
9051 East Vía de Ventura, Scottsdale, 866-543-9637.
Hours: 7 p.m. Wednesday to Saturday; 4:30 p.m. Sunday (through August 11); 7 p.m. Wednesday to Friday; 4:30 p.m. and 7 p.m. Saturday, 2 p.m. and 4:30 p.m. Sunday (starting August 14).
KEEP PHOENIX NEW TIMES FREE... Since we started Phoenix New Times, it has been defined as the free, independent voice of Phoenix, and we'd like to keep it that way. With local media under siege, it's more important than ever for us to rally support behind funding our local journalism. You can help by participating in our "I Support" program, allowing us to keep offering readers access to our incisive coverage of local news, food and culture with no paywalls.
Make a one-time donation today for as little as $1.