The inside of the new Rito's Chris Malloy
When I heard that Rito’s Mexican Food was expanding to a third location, one that would be sleek and jazzed, my first reaction was something far from hope or joy.

I am usually an optimist. But the original Rito’s, open on 14th Street since June 1977, has a flawless environment. Small. Cramped. People standing, waiting for $3 crispy tacos and tostadas, $4 burritos. A host of workers cutting and wrapping on the far side of the counter, working to sail the tide of orders. It was perfect.

If you wanted to sit, you sat outside. There wasn’t much to look at but a school and your chimichanga. You focused on the food, which you ate with your hands. Everything was humble and comforting.

A few weeks after moving to metro Phoenix, I went to Rito’s for lunch on my 30th birthday. I went for an enchilada-style burrito with red chile, sure, but also for that vibe. It acts as a seasoning. Not the kind you add before cooking or during, but the kind added as you eat, psychologically, flavoring the sensory data of that burrito as it zips to your brain.

Okay, okay, I thought, about the new Rito's. Maybe it will still be good. 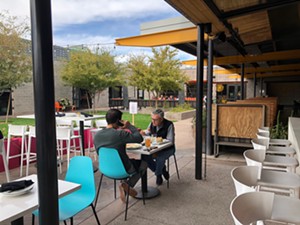 Outdoor vibes at the new Rito's.
Chris Malloy
But early reports weren't promising. A friend told me he went early in the lunch hour, when nobody was really there, and he had to wait a painfully long time for his meal. He said there were modern light fixtures! Fancy tequila cocktails! An outdoor bar!

I filed away the idea of going. My reservations weren’t based on any kind of notion that Mexican food can’t be upscale, which would be ridiculous, but on the lean fact that a neighborhood joint was going ritzy. It just seemed like the kind of transformation that wouldn't compute.

But just before lunch on a recent Monday, Rito’s popped back into mind. So I drove uptown to the new spot.

The new Rito’s, part of Crown on 7th, a shopping and dining cluster on Seventh Street, has a sizable parking lot. As you walk to the restaurant from the lot, you see a takeout window. The inside is decked with smooth woods, navy leather stools, white chairs with patterns that recalls papel picado, and light fixtures that exist for more than lighting.

As the narrow, 35-seat dining room funnels you outside, you may compare the sea of natural light to the old spot’s dimness.

A 45-seat patio opens to a turf green shared with other Crown on 7th properties. Magenta flowers festoon a wall; Oaxacan palomas sweat on tables; the bar smells like citronella (frying oil when the wind shifts); and the caterpillar, thanks to the help of design group Lightvox Studios, has metamorphosed into a wild Sonoran butterfly.

And guess what? It doesn’t feel weird!

The food menu is the same with a few simple additions. They are carne asada and chicken, available in tacos or burritos. I noted these changes, swiftly ignored them.

My regular order at Rito’s is an enchilada-style burrito with green- or red-chile beef in the middle and slicked on top with the color of sauce matching the inside, plus melted cheese. Today I went green. Remembering my friend’s marathon wait, I checked the time after I placed my order with the low-key outdoor bartender.

You know when your food comes because it comes like an alien object out of the sky, like some kind of vast saucer spiraled down from Orion. Plates have the diameter of beach balls. In comparison, my fork to the right, opposite the bulbous burrito, looked like a utensil that a bibbed toddler would use to scoop carrot puree. I asked the bartender if the portions were bigger than at the original spot on 14th Street, thinking they might be.

I looked down at a soupily sauced burrito like a rolled mountain, a heap of red rice, and a deep pool of beans. Well, I thought, the outside looks different but nice, and the bar is comfortable and stops time a little, and the service is good, and the food came out fast today. But how would that food be, now melted in lush yellow cheese and coiling steam? Would the chile burrito measure up to the glorious original? You can almost tell from smell alone, leaning in for your first bite.

Rito's Mexican Food. 5813 North Seventh Street, #135; 602-368-6726.
Monday to Saturday 10 a.m. to 10 p.m.; Sunday 10 a.m. to 7 p.m.
KEEP PHOENIX NEW TIMES FREE... Since we started Phoenix New Times, it has been defined as the free, independent voice of Phoenix, and we'd like to keep it that way. With local media under siege, it's more important than ever for us to rally support behind funding our local journalism. You can help by participating in our "I Support" program, allowing us to keep offering readers access to our incisive coverage of local news, food and culture with no paywalls.
Make a one-time donation today for as little as $1.
Chris Malloy, former food editor and current food critic at Phoenix New Times, has written for various local and national outlets. He has scrubbed pots in a restaurant kitchen, earned graduate credit for a class about cheese, harvested garlic in Le Marche, and rolled pastas like cappellacci stuffed with chicken liver. He writes reviews but also narrative stories on the food world's margins.
Contact: Chris Malloy
Follow:
Twitter: @yollamsirhc
Instagram: @malloy_chris/